With one (epic) French kiss, a relationship and art unfold 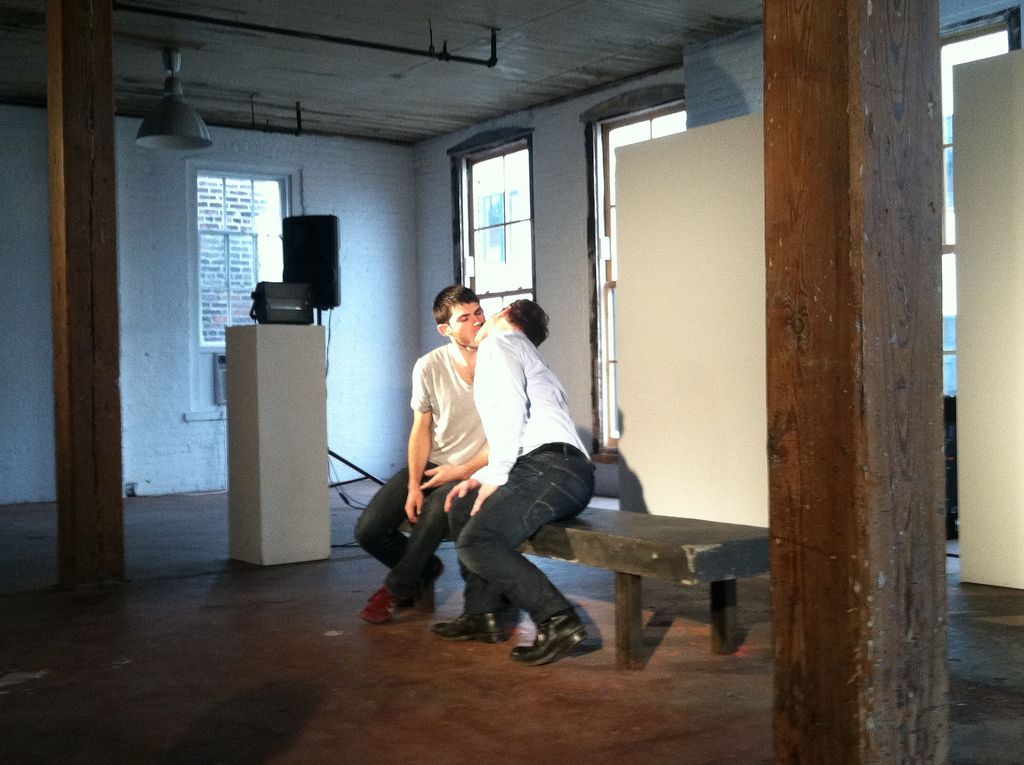 Addressing the artist’s insatiable desire to create – and “to conquer” his muse – Dubois uses the framework of the romantic encounter to demonstrate the inherent imbalance between artist and subject. But as the embrace continues and, together, the men’s passion builds, flairs and nearly combusts, the audience is witness to something more.

“It is the story of man,” Dubois explains. “How does one survive as an individual in a relationship?” 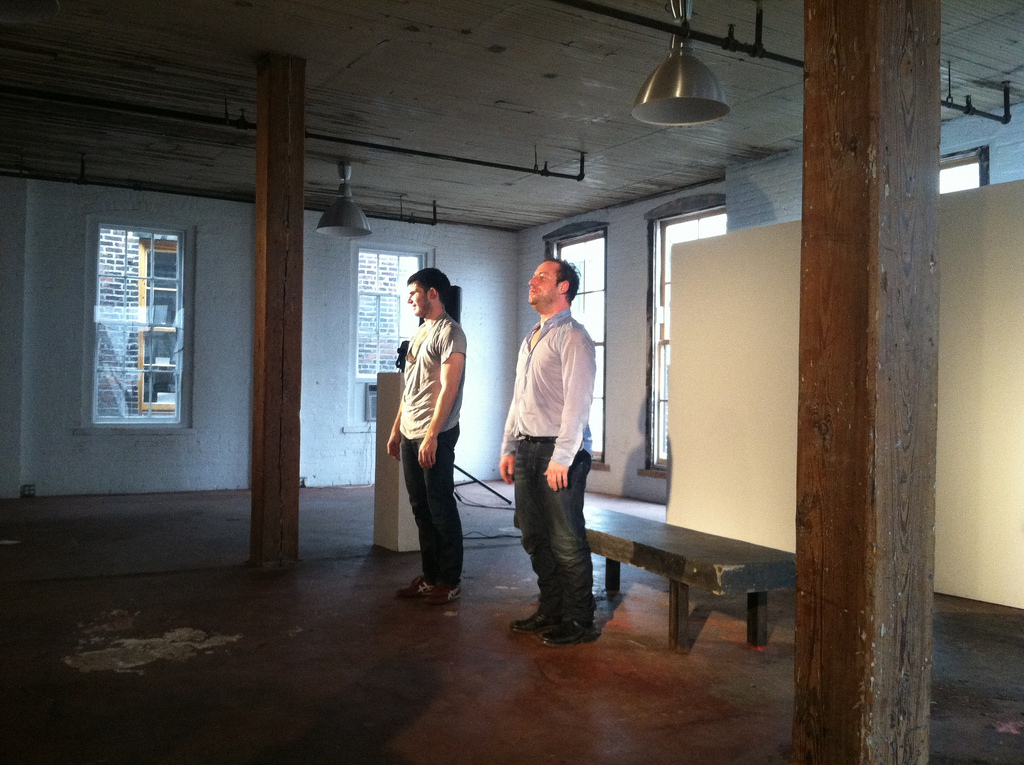 John Hoobyar sits on a lone bench facing his audience and yawns. More than tired, though, he looks disarmed – and vulnerable.

From behind a wall, Dubois emerges with the focus of a predator. Seated next to each other, the men’s eyes lock for an impossible fifteen minutes. The first note of Stravinsky’s ‘Rite of Spring’ stretches out, indefinitely, as if it is the sound itself of the lovers’ first chemical glance.

Suddenly, the men’s faces draw closer together, a phenomenon Dubois describes as “bouger sans déplacer.” Imperceptibly, truth and desire have unfolded between them, and the audience is witness to a moment captured: the artist is ready to strike; the lovers are prêt à baiser. 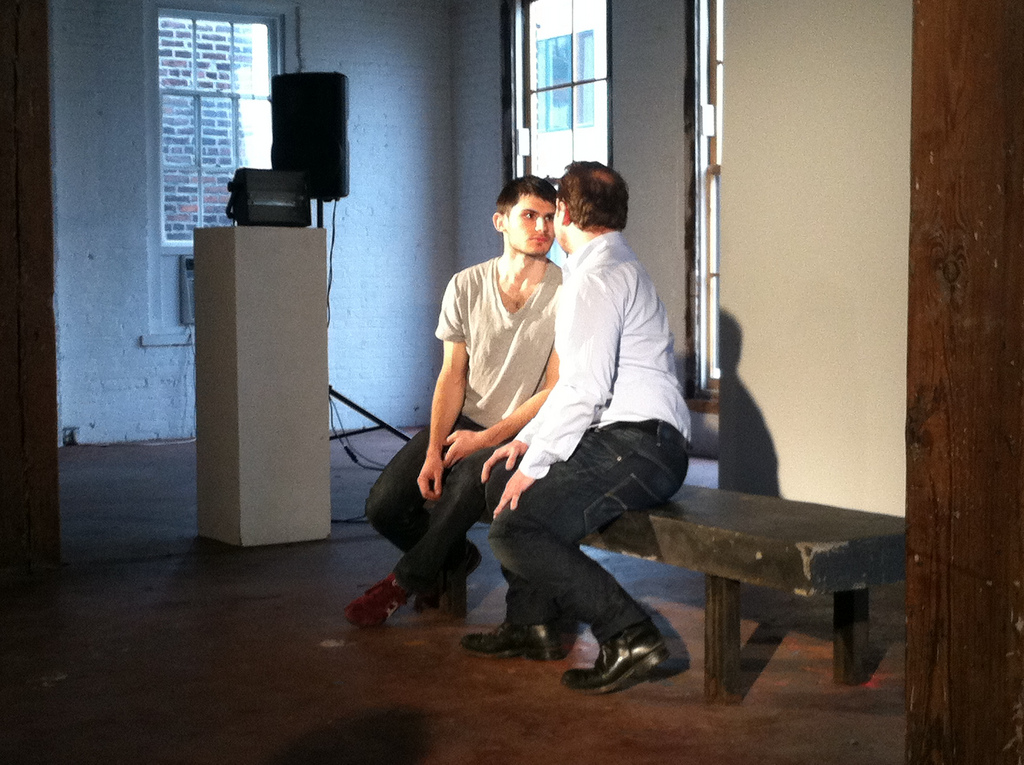 Love is a battlefield

The kiss, at first, is a resolution. But like any relationship that moves beyond first contact, struggle is not far off.

As the ‘Rite of Spring’ flows beyond its first note, the men’s kiss mimics the music’s crescendos and planes, morphing seamlessly between aggression and submission, passion and tenderness. 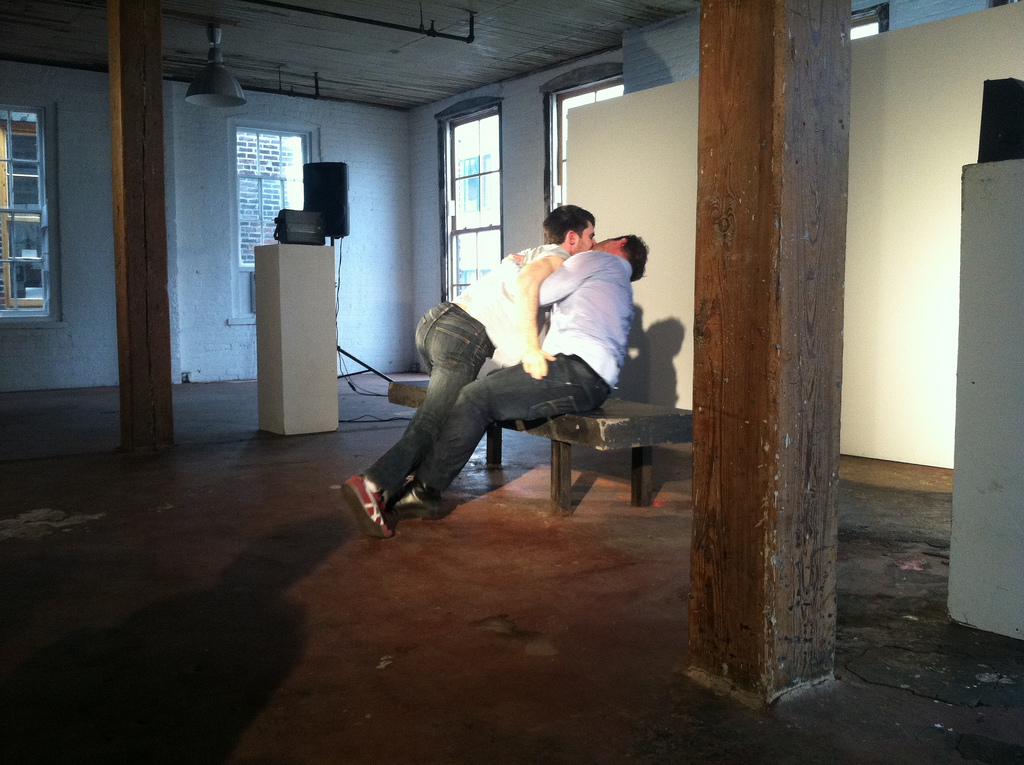 Until, without warning, the encounter turns bellicose.

Dubois charges Hoobyar, his muse and object of desire, emitting the grunts of a warrior. Each is forced horizontal to the bench but Hoobyar fights back, reaching deep within to assert his strength, and his self. Shirt backs are soaked and salty rivulets fall from brow to chin. There is continuous pull and repulsion. The encounter is not for the weak, and it nearly annihilates them both.

The entirety of a relationship, encapsulated in a kiss.

As the music ends and the men break their embrace, it is left to the audience to decipher what had been. Was it love? Hate? Passion or weakness? Selfless longing or selfish desire?

Or perhaps the art and the union were an incalculable mix of them all, and the audience, their witness, keeps them alive after they are no more. 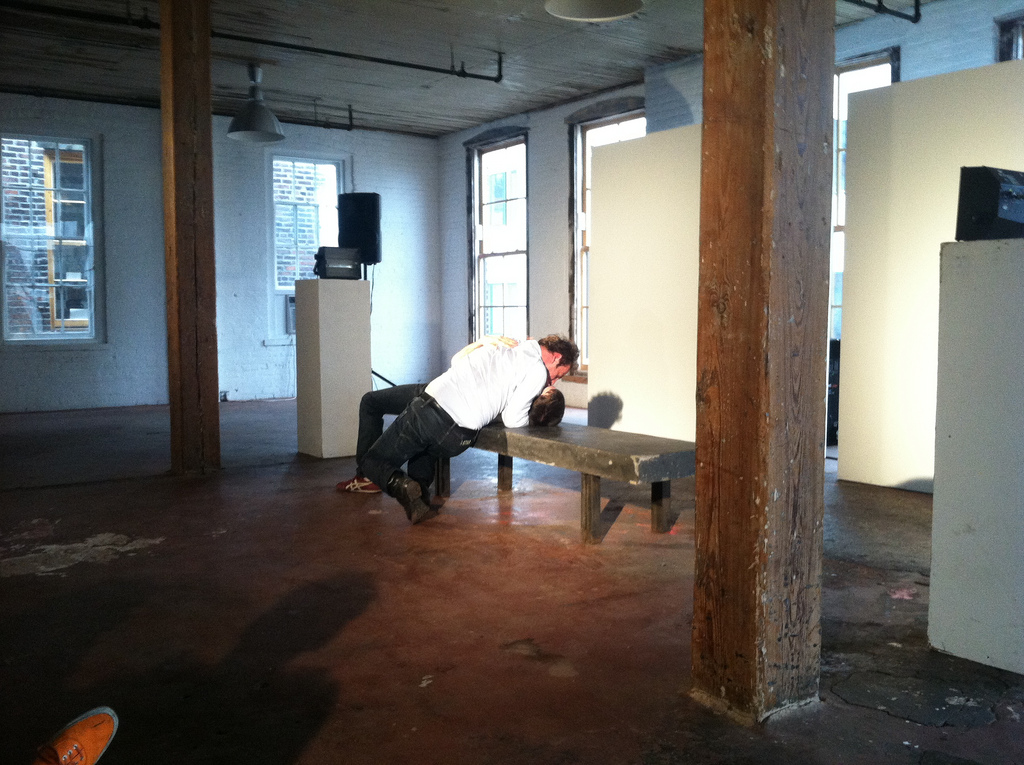 Dubois, 40, was a student of economics in Paris until, at 23, he followed his gut and took up dance. At 35 he turned to choreography and recently conceived the trilogy, ‘Révolution’, ‘Rouge’ and ‘Tragédie’.

With each performance of ‘Prêt à baiser’, Dubois engages a different muse. He and Hoobyar had only two days of rehearsal – which included, of course, a kissing test.

“It’s a performance, not a spectacle,” said Dubois. “It’s a very important difference, because what you see is slightly different every time.” The music, he says, guides the performers but doesn’t dictate specifics. “Improvisation works only if you have a strong grille,” he explains.

“It’s about each of their relation to life and air. Maybe this couple could not breathe anymore.”

Still, unlike Stravinsky’s ‘Rite of Spring’, there is no ultimate sacrifice. “The muse is both the elected and the hunted, but in this case, it is important there is no death.” Because in the end, he concludes, the art belongs to the audience.

All photographs by Natalie Rinn