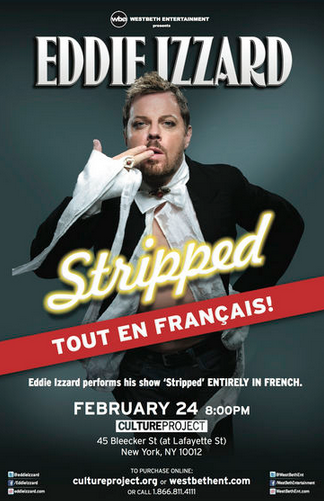 If you like standup comedy and understated British humor, you probably know and love Eddie Izzard, one of England’s most well known wise-crackers. But in a NoHo theater last weekend, Izzard revealed a talent that even devout fans might have missed: he’s also funny in French.

Since the early 90s, Izzard has delivered incisive, absurdist humor to audiences around the world, and now he is bringing his international reach to the next level. “I consider myself a British European and I feel that performing in another language is a good way of reaching across boundaries,” Izzard explains.

In English, Izzard’s talent is clear, but watching him deftly bust guts in a foreign language for his touring show ‘Stripped, tout en français‘ is indeed a disarming and captivating site to behold.

At Culture Project on Bleecker Street, an energetic din of French and English permeated a tightly packed lobby. The prospect of watching Izzard performing in French put anticipatory grins on show-goers’ faces, as if all were in on a secret.

On stage, Izzard – cross-dressed casually in pink heels, red nails and jeans – polled the crowd of nearly 200 for a breakdown of native and non-native Francophones. He determined a rough one to two-thirds ratio. “Les françcais qui parlent en anglais, c’est bi-[unprintable English]-zarre!” Izzard quipped of the native French contingent. Already, the house was on his side.

On ebay, iTunes and God 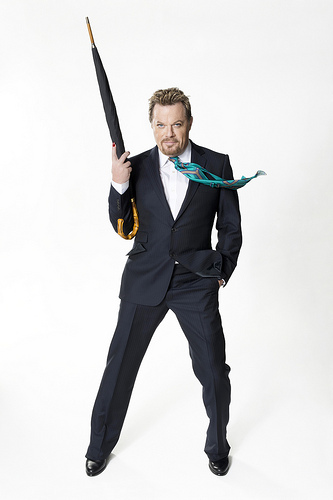 Onstage, Izzard is peripatetic, and his shifting path mirrors the disparate subjects he explores.

From PCs versus Macs (understanding PCs, he says, is like deciphering words in operatic vibrato), to Hitler (today, his head would be sold on ebay), and iTunes agreements (which make liars of us all, every time we say we read them), he points to a nuanced absurdity before seamlessly shifting to the next topic.

But one thread is constant throughout: Izzard’s skepticism on God. “I’m agnostic so that I can argue with him to enter heaven,” he says with a wry smile. “I didn’t know if you existed,” a hypothetical Izzard explains to God at heaven’s gate. “But now I know!”

Throughout history, Izzard argues, if God had existed things would have gone differently. “Why were there 65 million years between dinosaurs roaming the earth and the appearance of man? What was God doing all that time? Reading the terms and conditions?”

Or, where was God when man walked the moon? “He should have been there to say hello; it would have only been polite!”

Izzard’s simultaneous ease and vulnerability in French in turn makes his audience sympathetic toward him. Twice, they saved Izzard: first when he confused the words for mushroom and champion (champignon and champion) and again when ‘herd’ escaped him. “troupeau!” yelled a man from the darkness. “Merci,” Izzard responded humbly. 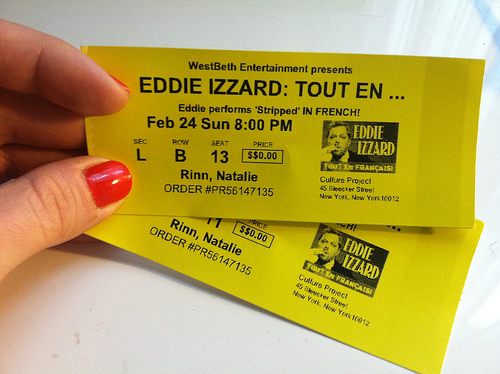 “I grew up on the south coast of Britain and France was the closest country to us,” Izzard explained in an email. “My father took us on French holidays, as did my school and both me and my brother decided we liked learning languages.”

Evidently. Izzard’s show even touches on Latin. Imagine communicating on the battlefield in Latin, he prompts.

“How many soldiers are there?” says a hypothetical infantryman.

“And that is why Latin is a dead language.” He concludes.

That may be. But thanks to people like Eddie Izzard, French at least is alive and well.

‘Stripped, tout en français’ is slotted to appear in Menton, Lyon and, on March 13, L’Olympia in Paris.