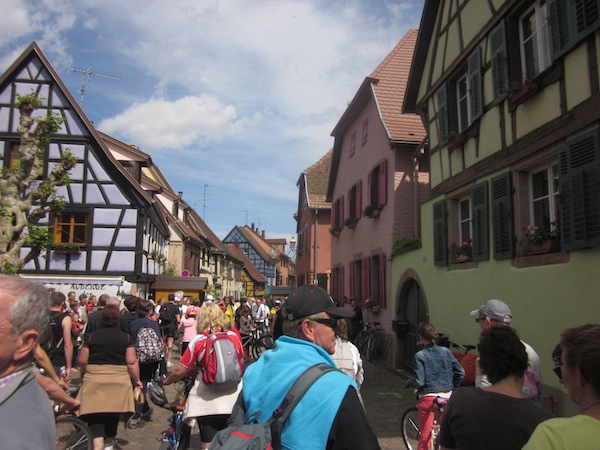 A few friends and I enjoyed some great French wines while biking along the wine route in Alsace.

To celebrate the 60th anniversary of La Route des Vins, the region of Alsace hosted its first Slow Up. It was a free event that promoted the use of non-motorized transportation. A 20km section of the wine route was blocked off to traffic and people could do the circuit on foot, by bike, with rollerblades, anything that didn’t have a motor.

In each little village along the route there were stands with food, wine and music. It was a great event made even more special as it happened to be one of the first sunny weekends after a very long winter.

On your French bike!

A few friends and I decided to make a day of the event so we prepared our bikes and took the train from Strasbourg to Sélestat (the departure for the circuit). We started out before lunchtime to make the most of the food stands along the way. 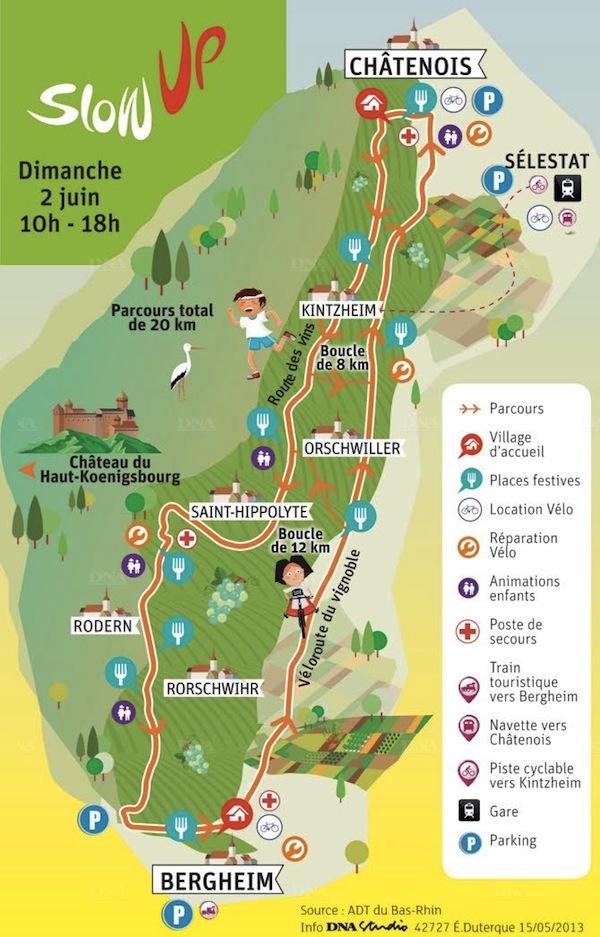 We started out with a glass of wine from one of the first villages. The choices were pretty much the same along the whole route: Gewürztraminer, Riesling, Muscat, Pinot Gris (mainly white wines since that is Alsace’s speciality). The wines were not expensive at all, priced from 1.50 – 2.50 euro per glass. 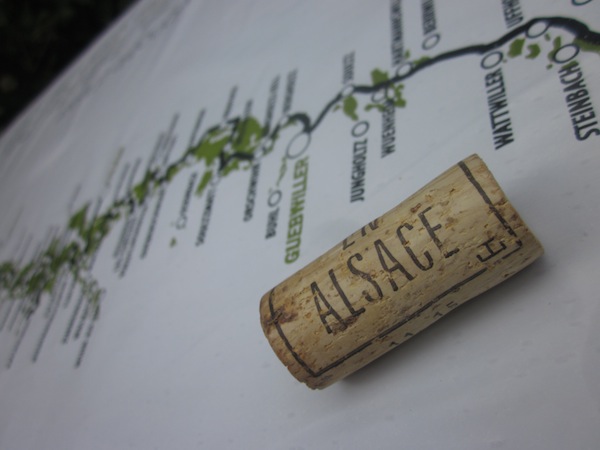 We stopped in a few of the villages to taste some wines and continued down to Saint Hippolyte to eat and take a little break. We enjoyed one of the rare Alsatian red wines along with some knacks, a traditional Alsatian sausage that resembles a hot dog.

After a nice break we continued on our way for some more wine tasting. If we got hungry along the way there were always people passing out snacks and bottles of water along the route. The route took us through some great scenery. We passed through many vineyards and had some great views of castles up in the hills. We also passed through some really cute little villages with typical Alsatian houses. 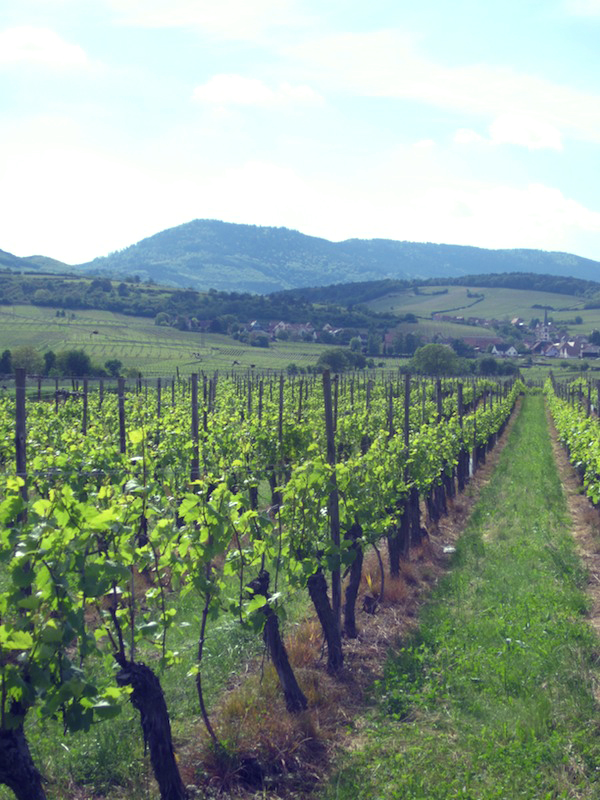 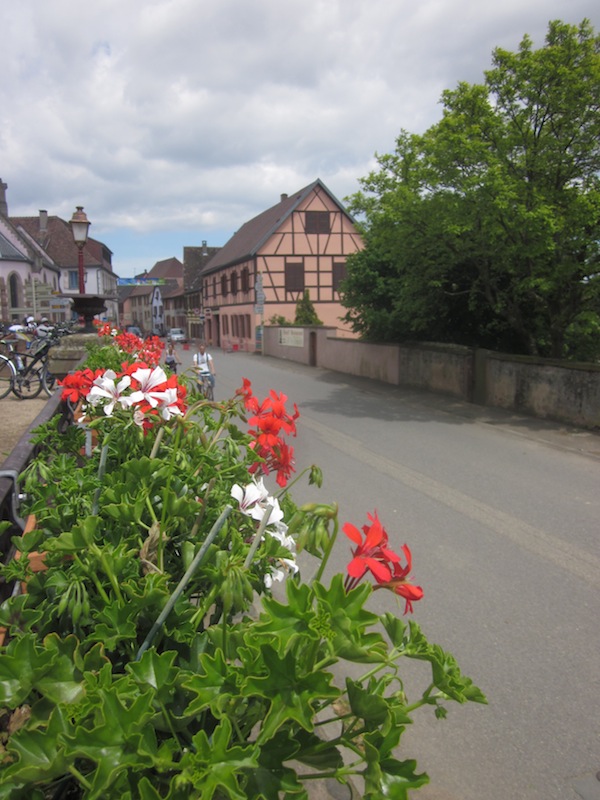 The route was flat most of the time but at some points there were some pretty high hills that made the next glass of wine at the top well deserved. At one point we found a really good band and decided to take another break to listen to their set. 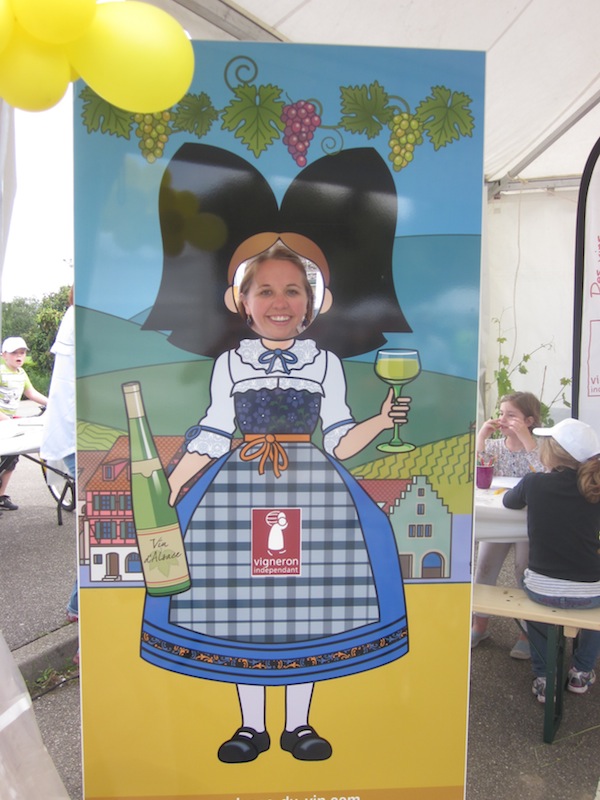 The ride ended up taking longer than we had planned but it was well worth taking the time to enjoy the scenery. The weather was perfect all day, not too hot and not too cold. It was a great day of biking, scenery and, or course, French wine.

Where is your favourite place for a French cycling adventure?

Image credits:
All by Julianna Johnson.
Except 2. Route Map, via DNA.fr.