Anyone learning French will have experienced that split-second of hesitation when making gender agreements. However, what is a mere headache for non-francophone speakers is a fierce source of debate that has spun out over decades in France.

While most people hold the notion that the French language is romantic and sexy, its use of masculine and feminine articles also makes it a sexist one in the eyes of many. The population is split by the question of gender-inclusive French words and the feminisation of professions.

Interestingly, this split isn’t straight along the gender line.

Add an ‘e’, change the world

Can the addition of an ‘e’ here and an ‘r’ there really be considered a call for semantic revolution? Having no such concept in English, us Anglophones can look on with amusement, fascination and relief that our own language does not spark such linguistic conflict.

The French are undoubtedly proud of the beauty and complexity of their language, derived from Latin and rooted in the creation of the Académie Française. Language, however, is a constantly evolving medium, which should arguably evolve with changes in society. While women represent a significant part of the workforce and occupy fields previously exclusive to men, many French masculine words relating to profession, function and title do not have a feminine equivalent.

“Can the addition of an ‘e’ here and an ‘r’ there really be considered a call for semantic revolution?”

So should grammar catch up with society? Or should centuries of linguistic history remain untouched?

Does French grammar have anything to do with gender?

Although French is a language that registers the genders of nouns, to a francophone these articles appear rather transparent. The gender article and agreements in French almost become a part of the word, and are therefore considered without gender-related overtones.

Despite this, it is hard to ignore that the names for certain high-level professions in French are notoriously male. With no neutral gender in French, the use of masculine default forms when referring to a professional woman is criticised as linguistic sexism at best, and at worst, as indicative of the preponderance of male domination in French and francophone societies. 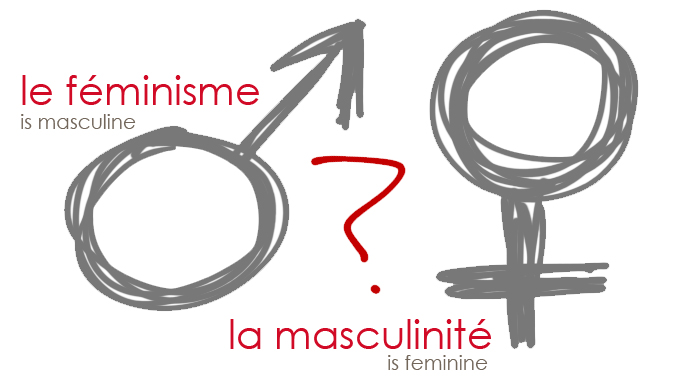 Since the Academie Française’s first terminology commission concerning professional women in 1984, the organisation has been adamantly against the prospect of job-title feminisation.  As the official authority on the French language, it argues that its reasons for opposition are purely grammatical and practical. Complications arise over which female suffix to use: the addition of an ‘e’,‘trice’ or ‘euse’, and the existence of proposed feminised words such as ‘médcin’ or ‘médcine’.

For many feminists however, it is not a question of grammar, but sociolinguistics. The use of the masculine article underlines for them the inequality of women even today in the workplace.

What makes this linguistic debate particularly fascinating is that there are also many feminists arguing against the feminisation of masculine forms.

According to many grammarians and feminists, a more effective way of fighting against gender inequality is to consider job titles as collective and neutral.

Many women feel that using a separate feminine word devalues their position and is derogatory rather than empowering. Terms such as ‘directrice’ and ‘traductrice’, for example, may nuance a meaning and sound almost like the female assistant of the ‘directeur’ or ‘traducteur’. Making the effort to create new separate feminine forms arguably puts too much emphasis on gender and is actually divisive.

If a man and woman hold the same job, are two different words really necessary? We want your opinions! Share in the comments box below.

Top image via the University Observer.