Before France was France: what’s left of Lutèce 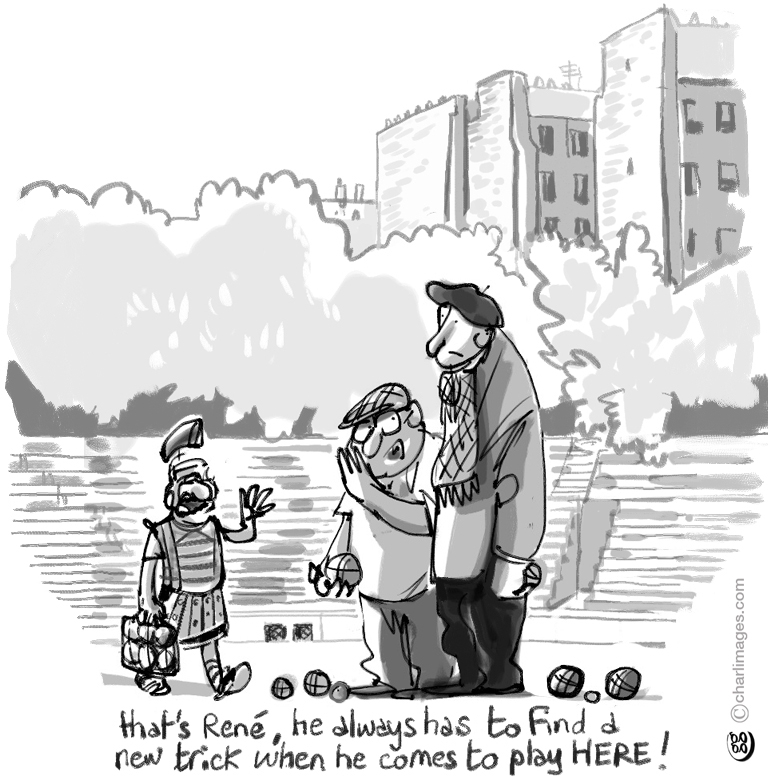 In which I travel back in time, intending to buy 5,000 shares of Microsoft in 1981, overshoot the mark and end up in ancient France. I mean Rome. I mean Paris. I mean Lutetia.

Long before anyone had even dreamed of such now-familiar notions as ‘France’, ‘Paris’, ‘arrondissements’ and ‘the fake deaf/mute petition scam’, there were already Parisians. Sort of.

Even in prehistoric times (which come to think of it were also premathematic, presciencic and prephysedic) there were people living in this neck of the woods. Or rather on this bend of the Seine.

The earliest signs of human presence in the area that would later become the national capital of France, and the world capital of feigned hearing disorders, are the remains of a nomads’ camp near that bridge where Marlon Brando first ogled Maria Schneider, dated at about 8000 BC. Over the next several millennia, various wandering bands of hunters, gatherers, traders, raiders and three-flat-rock monte dealers stopped for a while on those same riverbanks and then moved on, presumably because they couldn’t find a place to park.

“Apparently the Parisii were good at a lot of things, like building fortified towns, farming, fishing, and sailing up and down the Seine to trade food, tools and ‘yo tribal matriarch’ jokes with other villages.”

The first permanent settlement in this part of the-country-formerly-known-as-Gaul was established on the Right Bank ca. 4000 BC, just east of the Gare de Lyon. But the neighborhood (‘EGaLy’) didn’t really earn its place in the realtors’ listings until 300 BC, when a Gallic tribe called the Parisii showed up and built a fortified town.

Apparently the Parisii were good at a lot of things, like building fortified towns, farming, fishing, and sailing up and down the Seine to trade food, tools and ‘yo tribal matriarch’ jokes with other villages. But they were not so good at inventing literacy, so the earliest written historical records we have about Paris date from when it was annexed by Rome.

This — by which I mean both the annexing and the writing about it — was the work of an ambitious social climber named Julius Caesar. Spurning his family’s salad-making, gaming and midwifing business, he became an officer in the Roman military. Since he was such a go-getter, one of his emperor-track assignments was to go and get Gaul.

He did, starting in 58 BC, and turned in an end-of-project report entitled ‘The Gallic Wars’, from which we learn that the subjugation process took a number of years and an even greater number of hard-fought battles.

At this remove I have to wonder: what were the Gauls thinking? There they were, living in hovels, ignorance and constant fear of invasion, wondering where their next boar’s head was coming from, when the most civilized, culturally accomplished people in the known world invited them to join their empire.

And the Gauls said, “Taxes? Fuggedaboutit!!” and opened fire. Or opened stab, or thrust, or a wineskin of whoop-ass, or whatever it was that pissed-off people opened before guns were invented.

“To see a bunch of old rocks that need no detailed explanation, you have to head over to the Left Bank.”

So the Romans and Gauls kind of started out on the wrong foot, but finally one of Caesar’s sub-subjugators subdued the Parisii-ian (or however you spell it) resistance in 52 BC. Whereupon the town became an outpost of the Unholy Roman Empire, triggering a construction boom that put Paris on the map. Literally — there was only one map at the time, and being put on it was considered quite an honor.

The Roman city was dubbed Lutetia, which the Gauls, who even then couldn’t be bothered to pronounce the final syllables of most words, immediately shortened to Lutèce. It spread out south from the Seine, covering the area now occupied by landmarks like the Sorbonne, the Jardins de Luxembourg and the restaurant Polidor, whose toilet dates from this period.

Lutèce was a proud and thriving Roman city, with richly decorated public buildings: a forum (on top of the hill where the Panthéon now stands), three bath complexes, a theater for dramas and sitcoms, and a gladiator arena for reality shows.

In the artist’s rendering linked here, you can see the former Main Street, now Rue Saint Jacques, running south from the bridge, the forum in the center and the arena just outside of town.

Of course, most of the glory that was this distant corner of Rome has disappeared — but not all of it.

Those Romans were no slouch with a trowel. Despite nearly two millennia of more or less steady urban development, stimulated by the occasional fire or Viking invasion, there are still whole big chunks of the ancient city to be seen in modern-day Paris. Three, to be precise, plus one more chopped-up little chunk.

Our tour begins on the Ile de la Cité in front of Notre Dame. Nowadays this is smack in the very center of the left ventricle of the heart of town, but at the time the island was an outlying suburb. Lutetians commonly had conversations like this around the papyruscopy machine at work:

“Hadriana and I are thinking of moving out of the city. There’s a new development opening up on the western tip of Insula Urbis. They’re calling it NoDa.”

“Across that bridge where couples leave manacles marked with their initials? It’s the middle of nowhere — think of the commute!”

“I know — it’ll take at least ten minutes to walk up here to the forum every day. I’ll be spending more on sandals. But the kids need room to run around, and it’d be nice to have a yard. Put in a barbecue, get a dog… My son wants a Phoenician retriever.”

“Well, it’s your funeral. Which reminds me — are you going to that triple crucifixion on Friday? Should be good.”

Below the old town, the older town

Despite its being at the end of the public chariot routes, this is where archaeologists have uncovered the most vestiges of residential Lutèce, which are on view in the Crypte Archéologique du Parvis Notre-Dame. Down a flight of stairs across the square from the cathedral is the entrance to a rather large space that has been excavated, exposing Roman-era foundations, most of them littered with flea collars and empty lighter fluid amphorae.

The crypt contains the dregs and butt-ends of about two dozen buildings and is quite interesting — on one condition: that you take the time to read through the information panels describing what the structures used to be. Otherwise they just look like a bunch of old rocks: 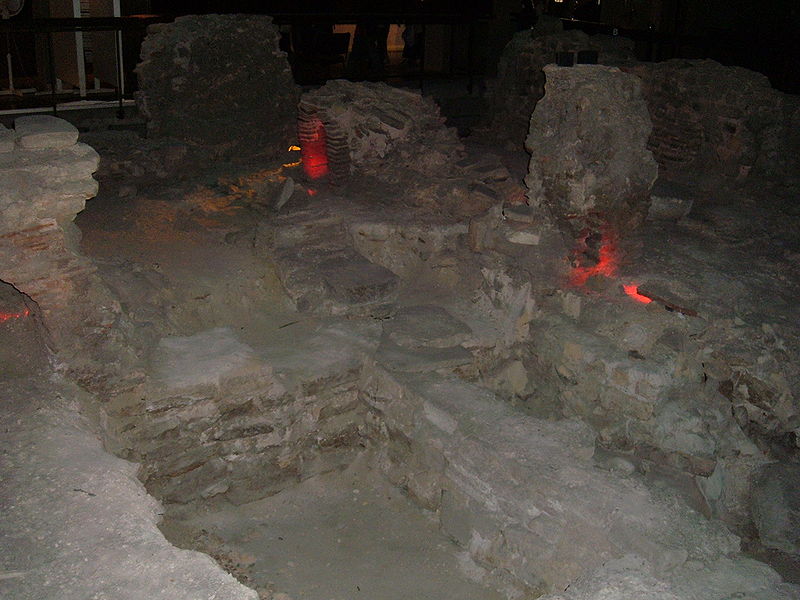 The lighting of the exhibit was conceived to evoke the barbecues of suburban Lutèce.

To see a bunch of old rocks that need no detailed explanation, you have to head over to the Left Bank and take a look at this: 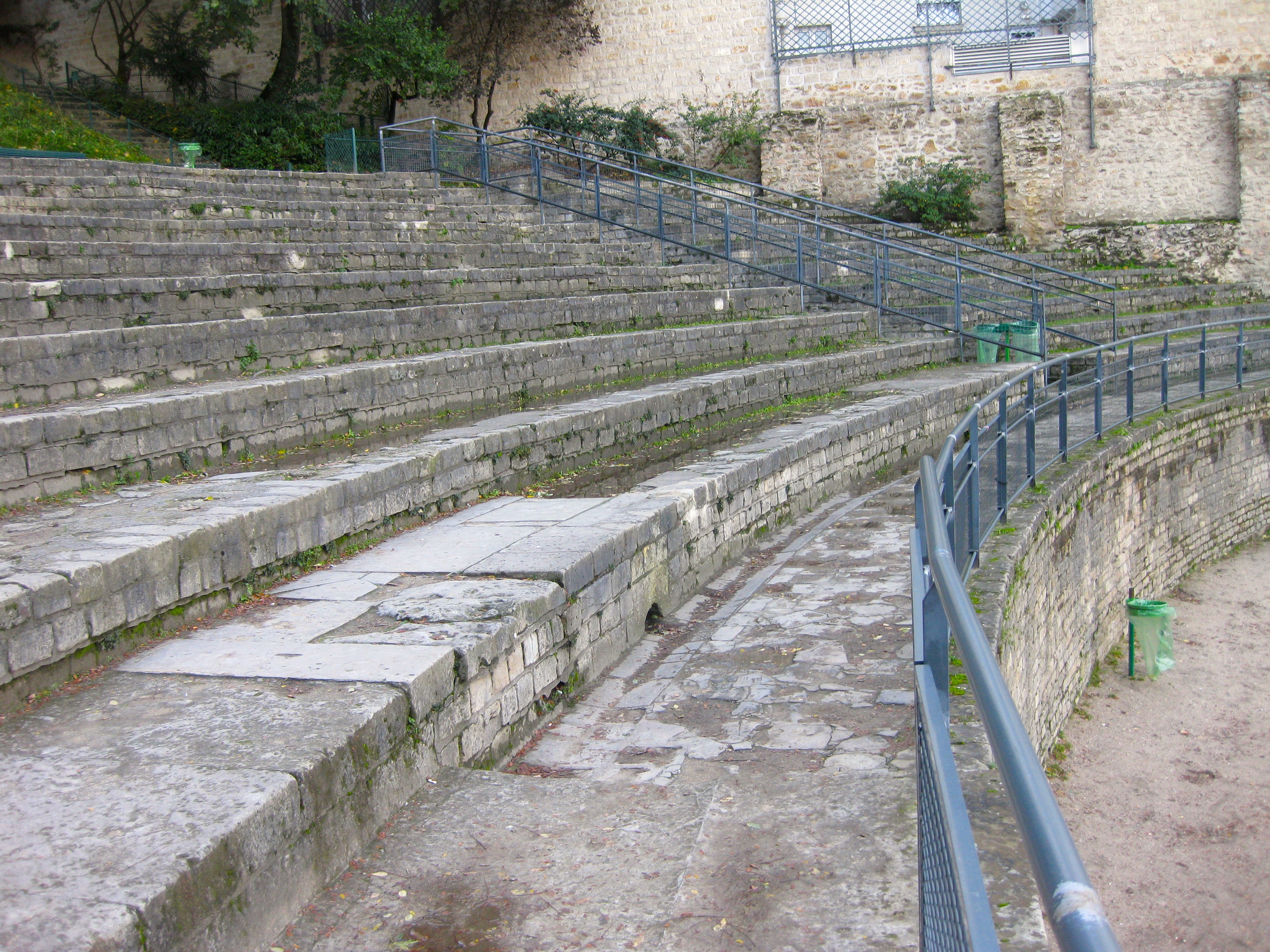 The blue steel railings were added later, but those are the original litter baskets.

Baguette and circuses: the Roman arena

Yes, it’s the above-mentioned, and surprisingly well-preserved, gladiator arena, the Arènes de Lutèce, accessible off rue Monge and rue de Navarre. The city excavated it in the 1890s, hosed off the leftover hemoglobin and converted it into a park.

In the old days this stadium was the scene of simulated battles, martyr vs. lion wrestling tourneys and gorefests of every description. Today it’s still used for sporting events, many of them just as hotly contested, but with fewer fatalities: 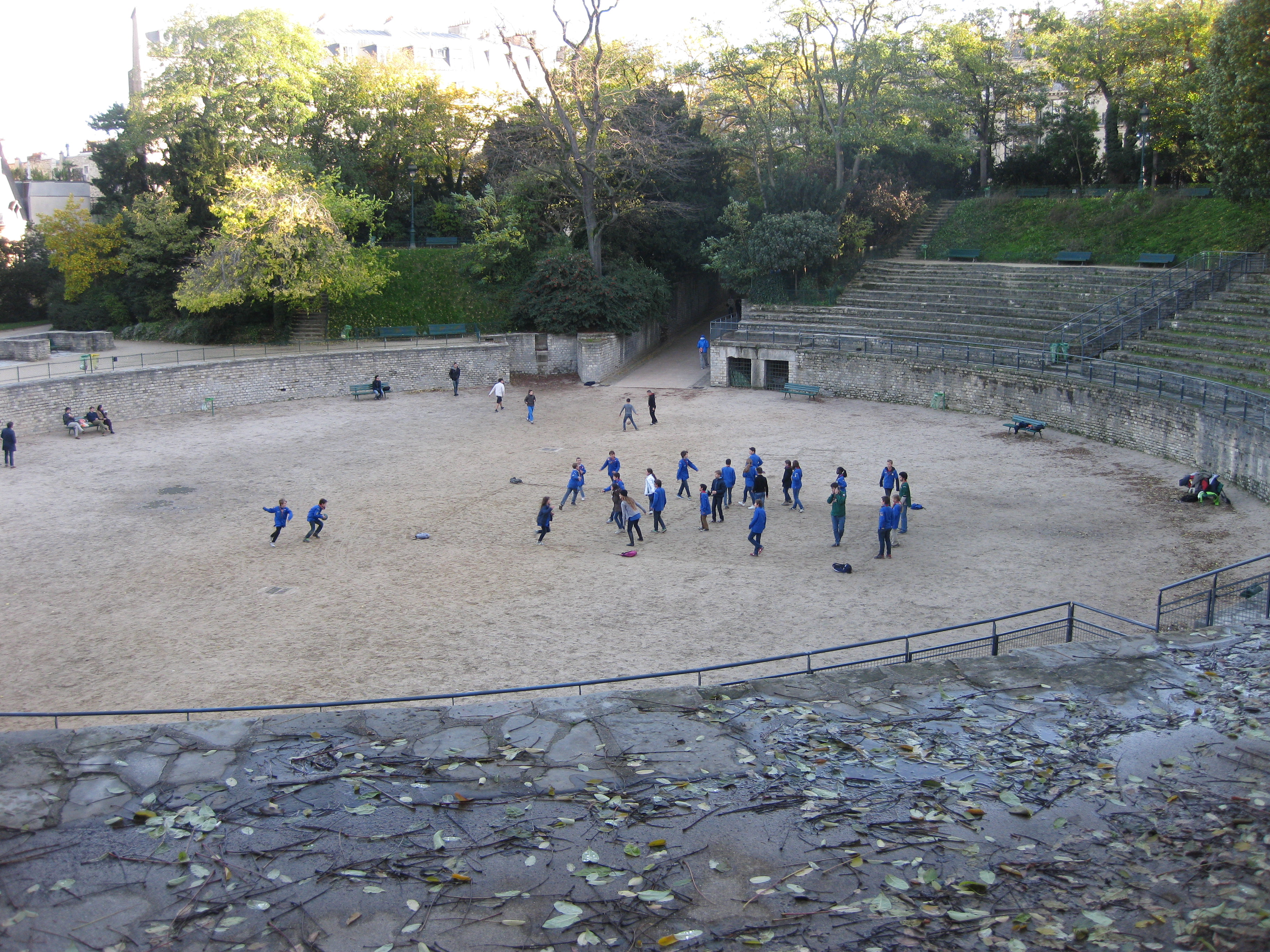 It’s worth a look around. Sprinkled here and there around the park are a handful of architectural spare parts to remind us of the arena’s golden, albeit blood-splattered, age: 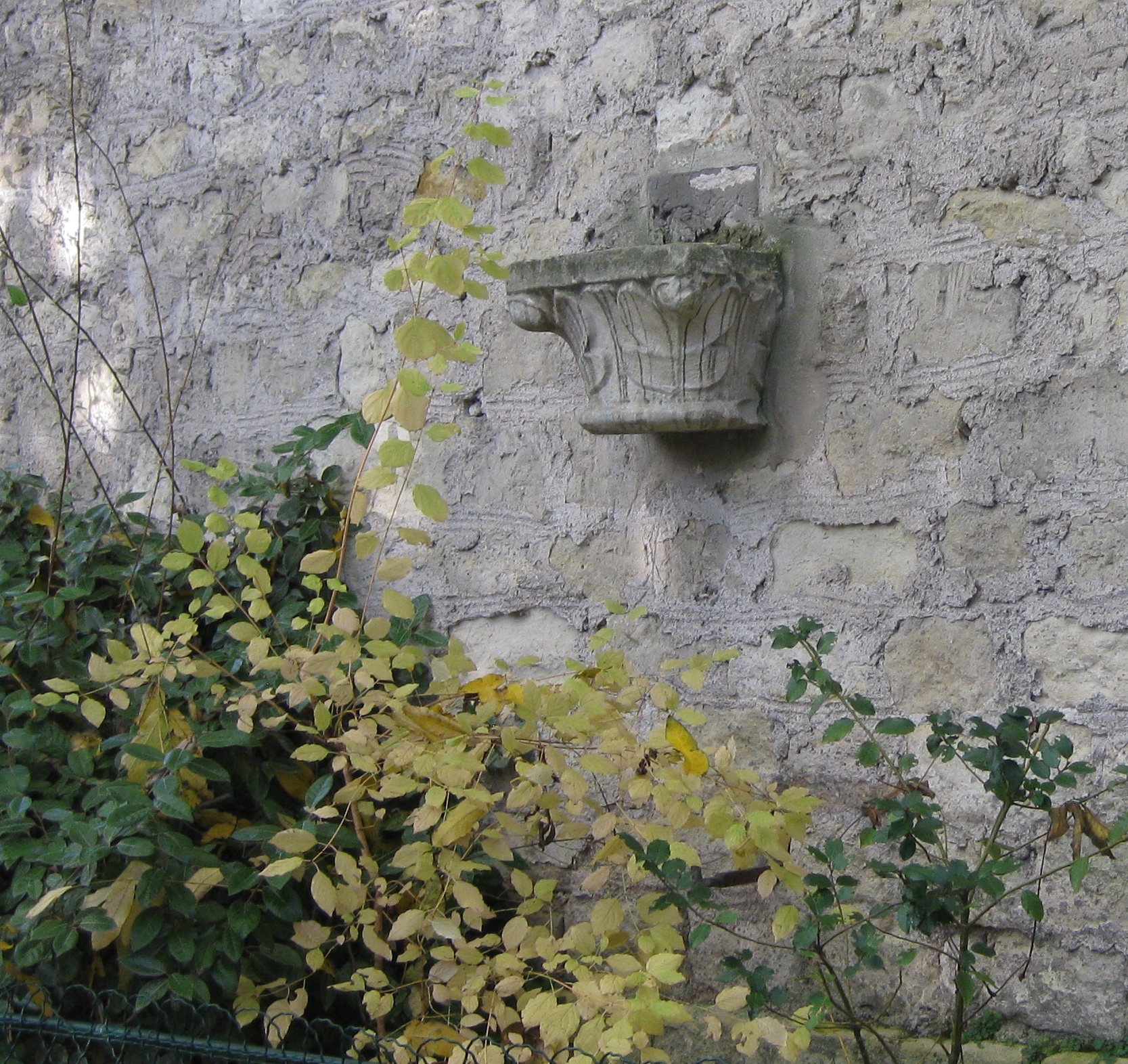 And, most intriguingly, this fountain: 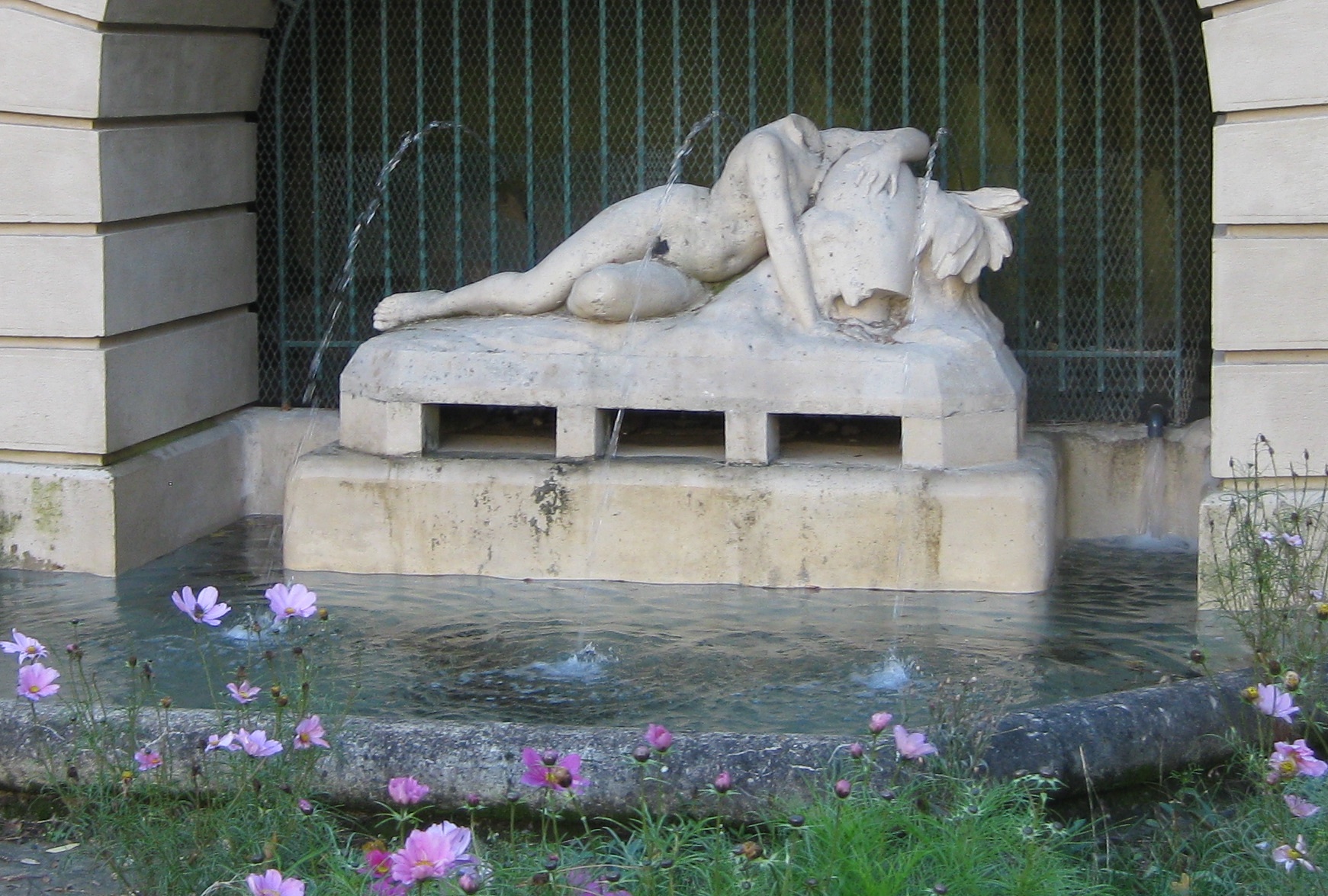 I’m not sure whether the reclining figure’s conspicuously absent vital organ is due to vandalism or whether it’s a memorial to the Unknown Martyr.

And where did the ancient Lutetians go to freshen up after a snuff show? A short walk away, right at the corner of the boulevards Saint Germain and Saint Michel, is the third and final massive morsel of Roman-era infrastructure, the Thermes de Cluny (Cluny Baths).

A clean break in the past: the Roman baths

The remnants of Lutèce’s largest bathhouse are now a wing of the Musée National du Moyen Age (literally, ‘National Museum of the Age at Which One Can Handle a Lawn Mower’).

As everyone knows, the Romans were very devoted to bathing, and built monumental, finely decorated complexes for that sole purpose. By the time Lutèce was founded, they had developed running hot water, central heating and an elaborate ritual in which bathers would pass from room to room and pool to pool, soaking in waters of different temperatures.

Unfortunately, they neglected to develop soap as we know it, so everyone came out of the baths looking, feeling and smelling pretty much the same as when they went in, only with frizzy hair. Still, it was a step up from the previous personal hygiene regimen, which consisted of accidentally falling into the river once in a while.

You can see the ruins of the bathhouse from the sidewalk on Saint Michel: 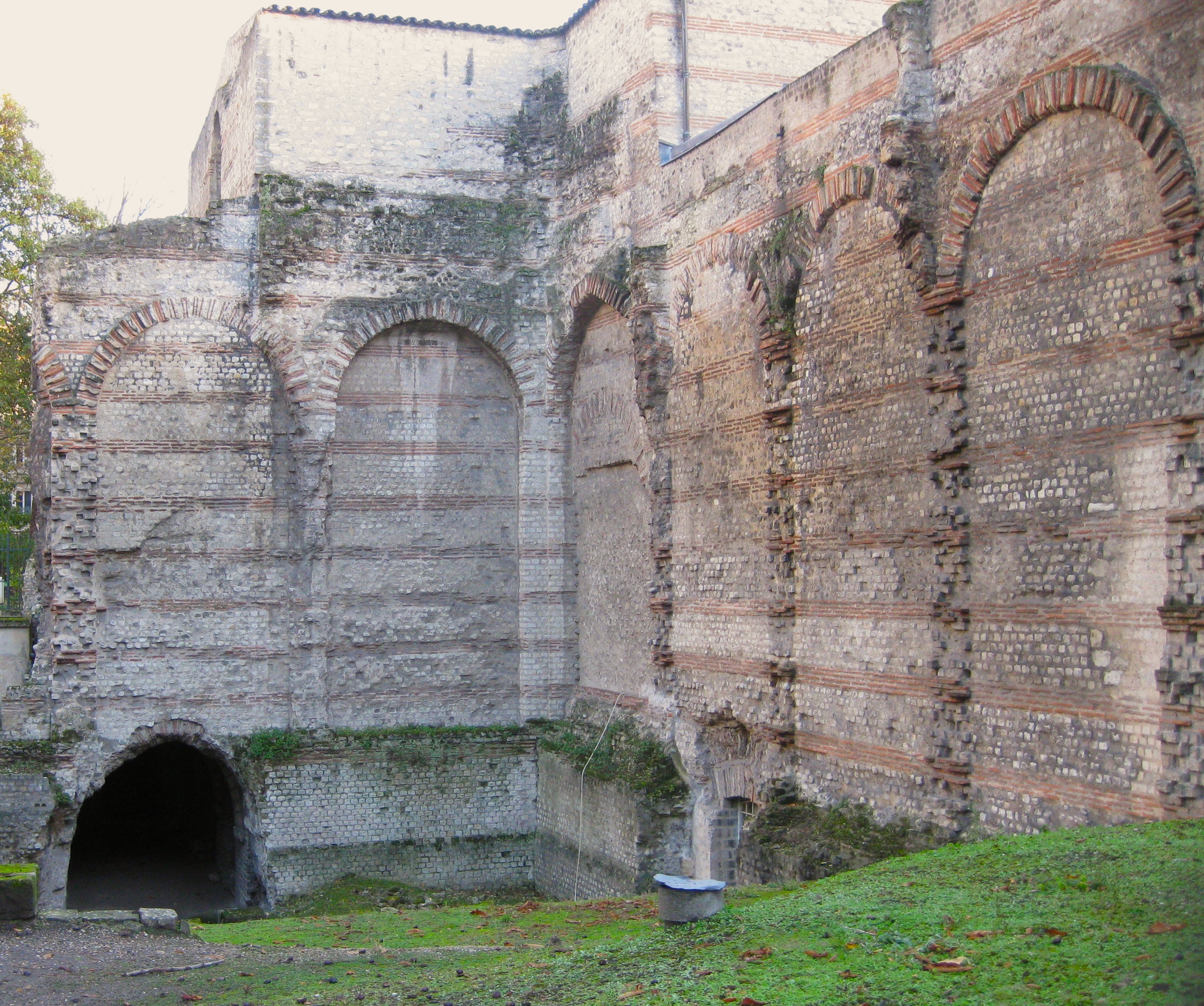 The tunnel at the bottom was a giant drain installed to handle the overflow during the annual Superurn Gladiatorial Championship, when almost everyone in town would go the baths all at once during half time.

Interestingly, despite the fact that the Cluny Baths are located within spitting (or, on feast days, projectile vomiting) distance of a wide, deep river, the Lutetians didn’t use Seine water for their ablutions. They brought the bathwater in from springs and streams out by Orly Airport through an underground aqueduct, bits of which are still visible in southern Paris today.

Along avenue de Sibelle and around the park encircled by rue Thomas Francine, you can see cross-sections of two old conduits, one dating from the 1600s and a smaller, older one built by the Lutetians: 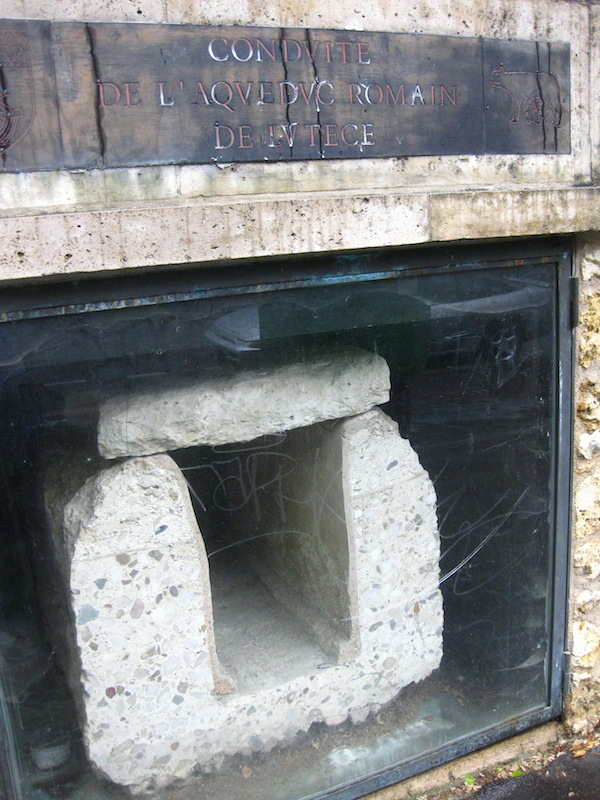 Note the workmanship here: it’s a perfectly symmetrical smooth pipeline made of well-mixed and obviously durable concrete, complete with a lid and a lining. Plus it’s clean. I wish the squatter toilets in Paris had been designed, installed and maintained with half as much care.

The path of the aqueduct is indicated on the sidewalks by plaques that recall Paris’s Roman heritage, and provide a fitting end to this expedition into the past: 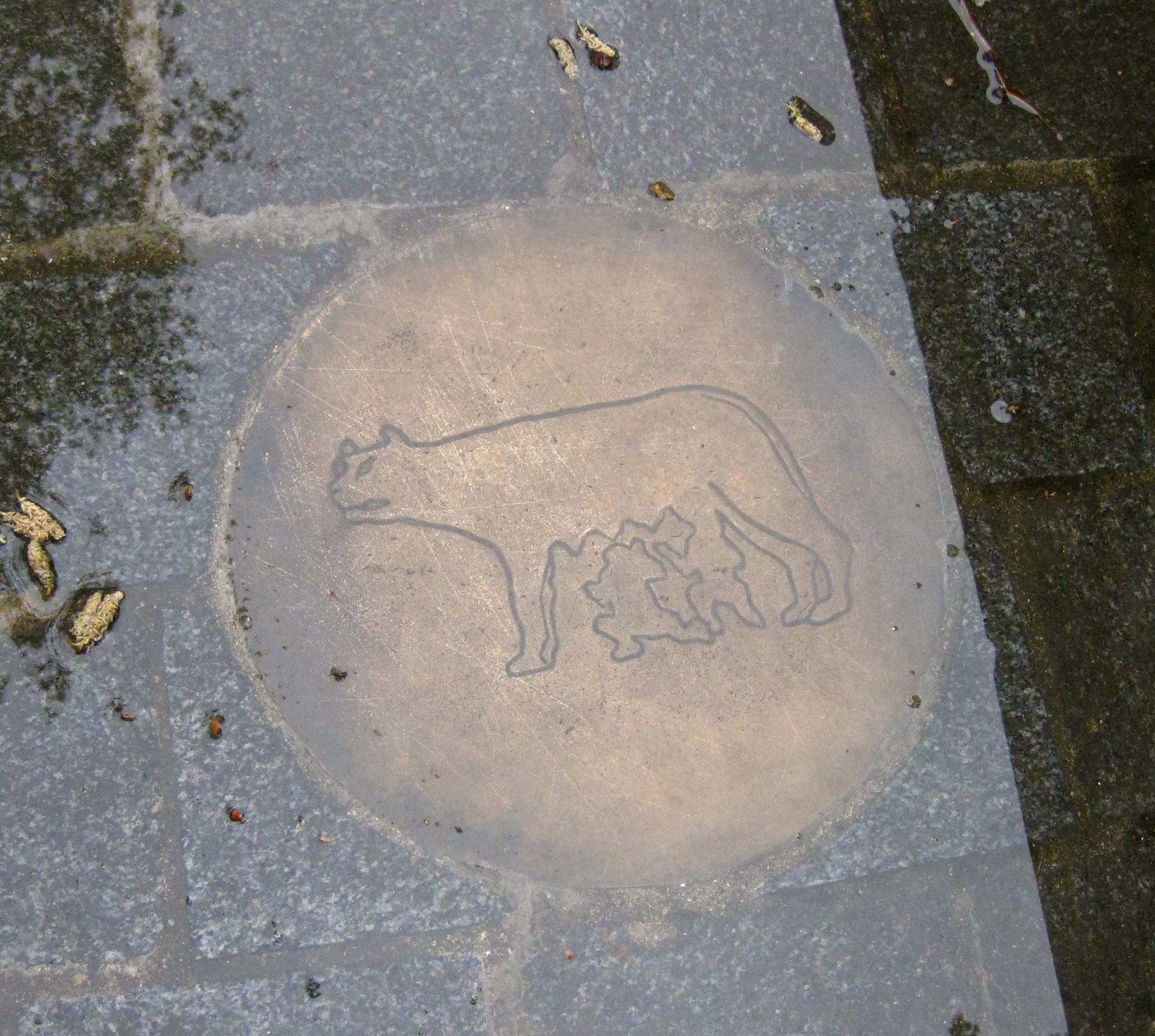 This is an ancient allegorical image that I’m sure everyone recognizes: the standing she-wolf symbolizes the city of Lutèce, suckling two human babies. The one on the left represents a Roman tax collector and the one on the right is, of course, a deaf/mute petition scammer.

Have you ever visited the ruins of Lutèce, or another ancient French city? What is your favourite period in French history? Share your thoughts in the comments box below.

Image credits:
All images are from Wikimedia Commons.
Except illustration © Charles Giai-Gischia.