Our guide to Alsatian cuisine: what to order when in Alsace 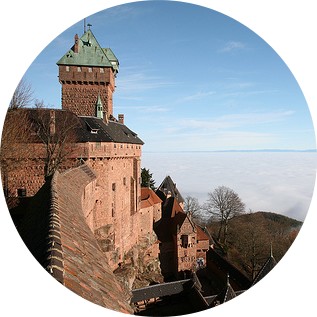 The versatile Alsatians have tried their hand at being both German and French a number of times over of the past few centuries. Nestled on the border of France and Germany, their culture is defined by their close connections to both of these countries.

This shows in their cuisine as well: Alsace combines the flavours of Germany and France to make some deliciously bizarre dishes.

So if you’re looking at visiting the region, cooking up an Alsatian inspired dinner or just want to reminisce on the fantastic food this region has to offer, it’s time to learn a little more about the cuisine these border-hugging French residents have to offer.

What to eat for apéritif et entrée?

Goose foie gras – This decadent delicacy is well known across France. But did you know that foie gras has strong links with Alsace?

Foie gras is made by force-feeding ducks or geese. This process fattens their livers giving them a delicately rich and buttery flavour that normal duck or goose liver doesn’t have. 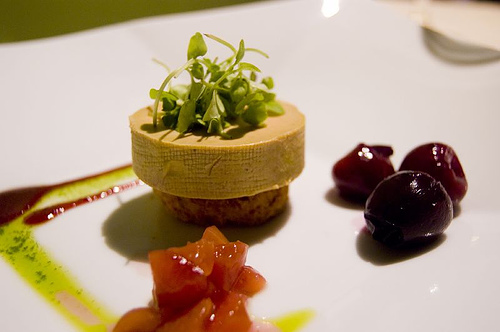 As Meg Jones of the Journal Sentinel says, this technique has been in practice for centuries. “Force feeding animals isn’t new, and it wasn’t invented by the French,” she explains.

“In fact, the practice dates back to at least 4 500 years ago, when ancient Egyptians fattened geese. A tomb in Egypt features a bas relief scene of people forcing grain down the throats of geese.”

Bretzels – The original pretzel, an Alsatian bretzel is the inspiration for the famed American pretzel. You may have seen boutique shops selling these bread-like knots of deliciousness. Traditionally they are topped with sea salt and cumin or caraway seeds, and are often served with de la bière. If you want to add a touch of Alsace to your life why not enjoy some bretzels with your apéritif?

And for your French plat principal?

Choucroute garnie – The French version of sauerkraut is a staple meal in Alsace. The sour cabbage is topped with potatoes, pork sausages, salted meats and of course, la charcuterie. The choucroute itself is often cooked using Riesling or another dry vin blanc.

Flammekueche or Tarte flambée – This mouth-watering dish is somewhat like a pizza. Made from bread dough, it is rolled into a flat base, and topped with fromage blanc or crème fraîche, onion and lardon or small strips of bacon. The simple flavours never disappoint, and if you’re making your own you can try different variations by adding mushrooms, gruyére or even munster. 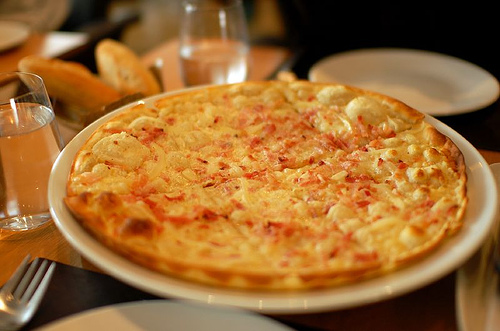 Kugelhopf – This yeast-risen cake is traditionally served with coffee. Originally they were cooked in glazed terracotta moulds that leave a cylindrical shape around the centre.

The curious cake is usually cooked with raisins and then sprinkled with flaked almonds and icing sugar. Variations of this dessert can be found all over Europe, so don’t be afraid to experiment with this traditional dish. 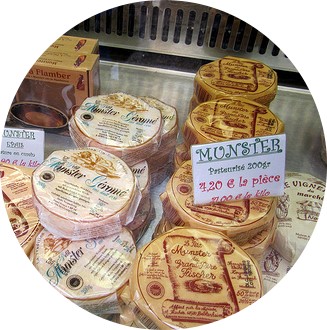 Munster – Alsace’s favourite cheese is aromatic to say the least. Munster has a rather pungent smell and flavour. Often a light orange on the outside, Munster is still made the traditional way.

The cheese is rubbed by hand everyday with a brine mixture, which adds to the flavour and prevents mould from growing. Munster, like champagne, is an AOC product. It can only be produced in the area East of the Vosges in Alsace and the West of Lorraine.

Beer – Maybe it’s Alsace’s Germanic roots but they are très connus for their beer. It’s the perfect drink to go with bretzels and munster. Two Alsatian brands of beer worth trying are Fischer and Krönenbourg.

Riesling – And of course like any region of France, Alsace has their own iconic wine. While the Riesling grapes may have come from Germany, the method of making Riesling d’Alsace is strictly French. By adding sugar to the wine and leaving it to ferment longer, French Riesling has a higher alcohol content than its German counterpart.

What’s your favourite dish of the Alsatian cuisine? This conversation is missing your voice! Add your favourites in the comment box below.