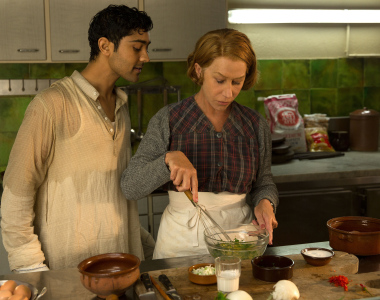 HFJ-0068r ..When Hassan Kadam (Manish Dayal) and his family move from India to a village in the South of France, they open a restaurant and encounter Madame Mallory, (Academy Award?-winner Helen Mirren) the chef proprietress of a classical Michelin-starred French restaurant across the street. Cultures collide, but they eventually find common ground through their love of cooking, in DreamWorks Pictures? charming film, ?The Hundred-Foot Journey.? Based on the novel ?The Hundred-Foot Journey? by Richard C. Morais, the film is directed by Lasse Hallstr?m. The producers are Steven Spielberg, Oprah Winfrey and Juliet Blake. Photo: Fran?ois Duhamel ..?2014 DreamWorks II Distribution Co., LLC. All Rights Reserved.