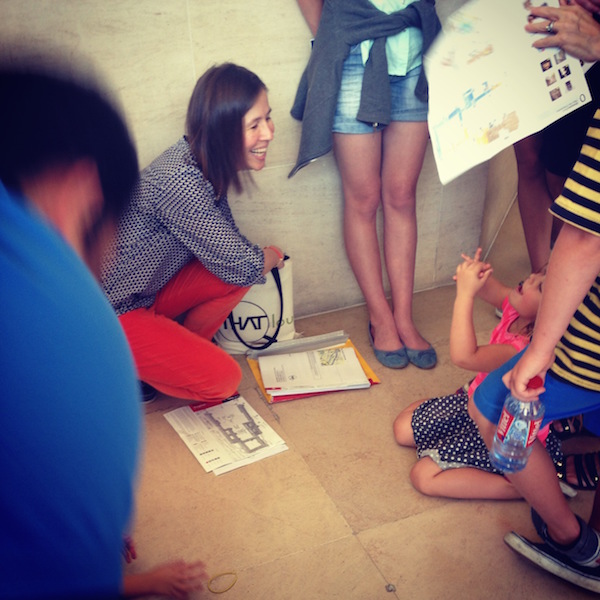 The first time I went to the Louvre, I was not disappointed by the Mona Lisa. Having been told by countless people that it would be underwhelming, I had very low expectations.

Now, elbowing my way through the noisy, unruly crowd towards this famed yet compact painting for the second time in my life, I’m struck not by the painting, but the scene at hand: I deliberately take several photos of arms and cameras thrust in the air, trying to catch her cursory glance on camera.

I would not have returned to the Louvre at all if it weren’t for one woman – and it’s not La Joconde. A Paris resident for the past ten years, Daisy de Plume now runs treasure hunts in Paris: at the Louvre (THATLou), Musée d’Orsay (THATd’Or) and most recently, on the streets of Paris (THATrue).

“I’ve been here for ten years and I didn’t come on purpose,” she explains. “I rented an apartment for three months in the Marais, and I hate the Marais. I didn’t know at the time how intense it is – it’s like the Louvre; you can’t get away from the tourists.” 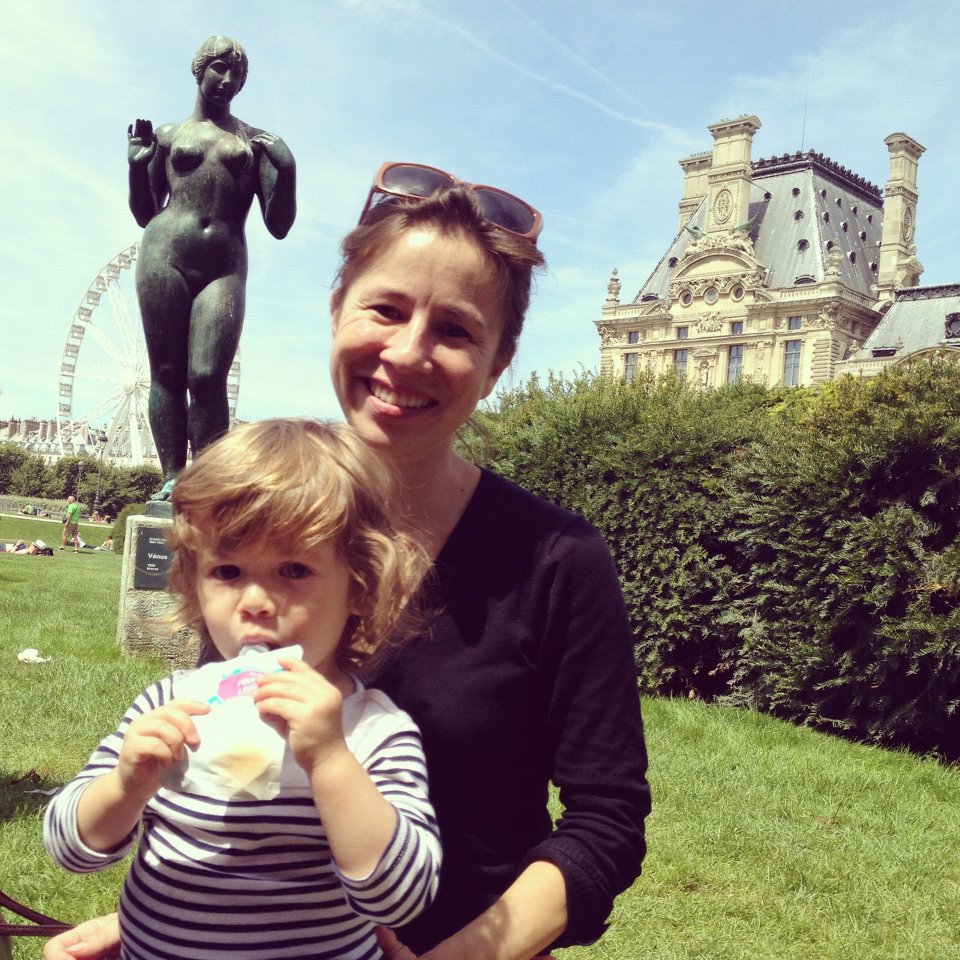 But like so many people who come to Paris on a trip, Daisy was surprised by how happy Paris made her. “I thought I was just coming on a sabbatical, I didn’t really think I was coming to stay. And then I was so happy, and I thought okay – I’ve got to try it out.”

So, she put her things in storage, quit her job in New York, and made the move across the Atlantic. One of her first jobs was helping to launch a classical music website, then walking dogs, and as a freelance scout for Condé Nast ‘Traveller’. She also went through the typical ‘expat in Paris’ experience of being an English teacher.

She recalls each stage of her life in Paris with a bemused fondness; as if it was a series of wonderful accidents and chance encounters. “It’s not just the physical areas [that help you to know a city] it’s the people. I’m glad I did all those jobs, because it got me to areas of Paris that I never would have known about.”

After that, Daisy decided it was time to cement her connection to France for good, and apply for a ‘real job’ in France. “I took the American Chamber of Commerce Directory, and I applied to 250 jobs,” she says. “I wrote to all of them saying ‘I have nothing to offer you other than my English language’… I got probably like 240 rejection letters, and then I got this job that I’m at now.”

“It took a lot of work. I’ll never feel like a Parisian or a French person, but I think I had gone through the wheels of another layer of the ‘French test’… They want to know how much you want to be here.”

The beginnings of a new French adventure

With her foundations firmly set in French soil, in late 2011 Daisy began to consider starting a company of her own. The idea came from both her studies in art history, and her childhood: her mother, also an art historian, would dream up games in museums. “She would try to bribe me, essentially, to learn [about art]… One time I earned $21!” 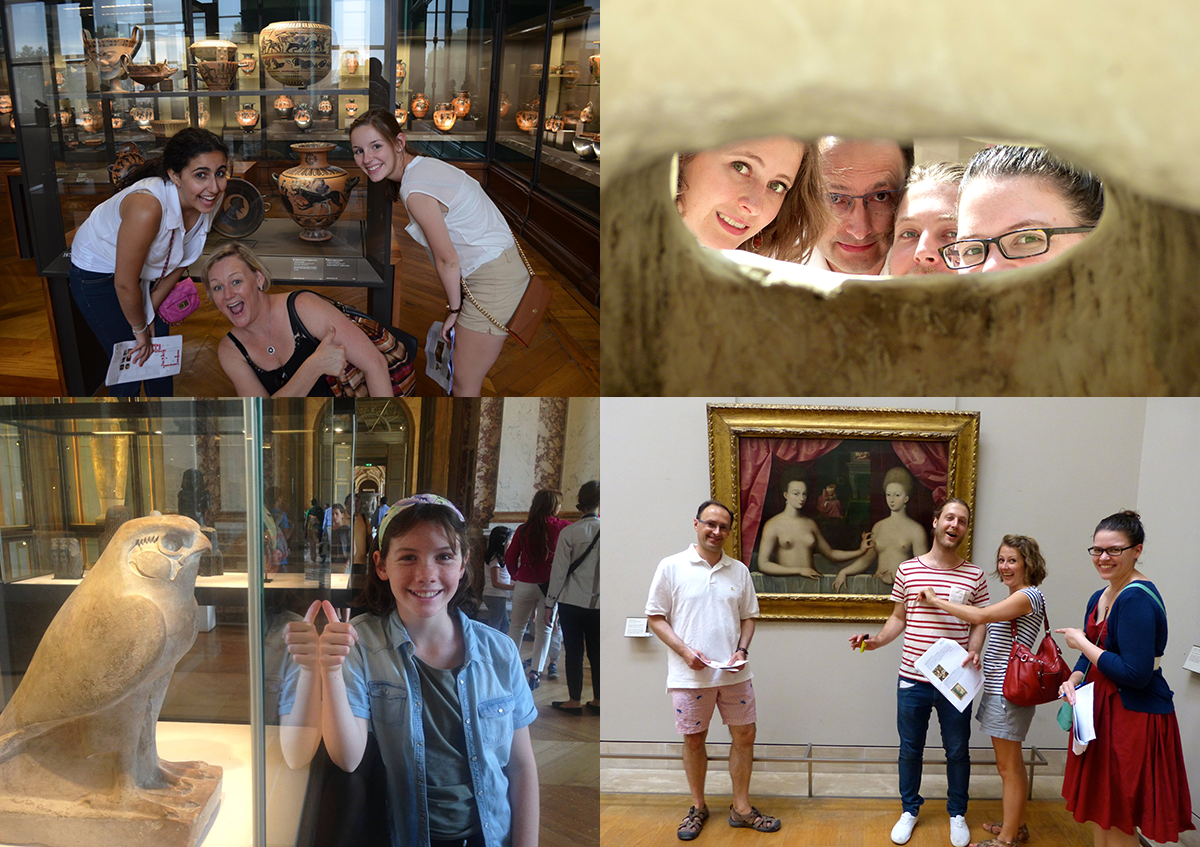 The first challenge for THATLou would be the format of the hunt. “The Louvre was too big for it to be a traditional treasure hunt where you find one clue and it leads to another,” she explains.

It needed to be “really straightforward and simple” for travellers who don’t have time to read swathes of preparatory material, and flexible enough to allow for changes in the art on display.”

“Another element… is that it’s fun for a tourist to have silly photographs! You’re going to take a photograph of the painting, but a photograph of just a painting is never going to be as good as a postcard,” she explains.

“But if you have a funny memory with it, it adds to it.” In each hunt, participants seek out as many works of art as they can from those listed in their treasure-hunting booklet, taking pictures of themselves as they go. Points are then tallied at the end to determine a winner.

Winning over the Louvre 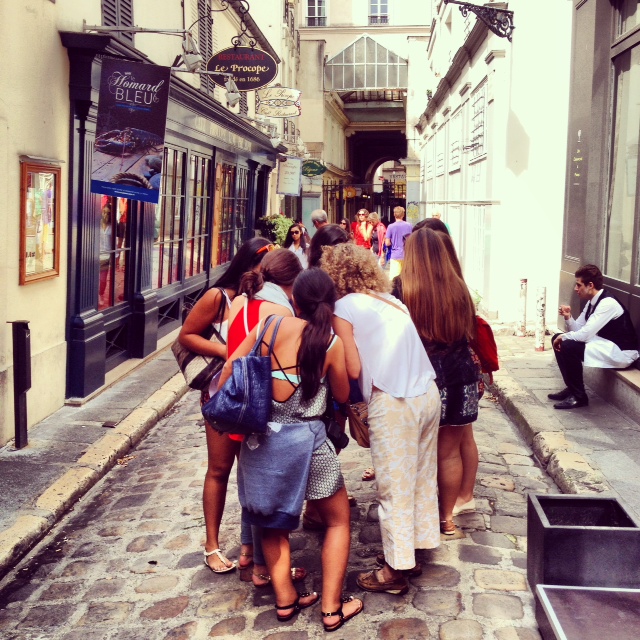 If the French are well known for their artistic triumphs and vast collections, they’re also known for a predilection to red tape, and a tendency towards the paradoxical. They will make even the simplest of tasks into a rabbit warren, while turning a completely blind eye to everything else. Daisy went to great lengths to ensure everything in her hunts was above board.

“I found an Intellectual Property lawyer who specialised in Museum Law and ran my business plan by him, asking if I could hire him to be my voice and ask the Louvre for permission to start my company,” she says. “He laughed at me and said, ‘you Americans really do like to give lawyers money’. He refused me based on the simple fact that I didn’t need [the Louvre’s] permission.” But Daisy was insistent, and now has a long legal document to prove the fact. She’s never had to use it.

It is a similar case at the Musée d’Orsay. In January 2013, Daisy was approached by the American Friends of the Musée d’Orsay (AFMO) to design a treasure hunt for the famed impressionist museum.

The real challenge for THATd’Or would be the fact that unlike the Louvre, photography is prohibited, and supplementary information on the art is minimal. It’s easy to wander through, glancing from Monet to Manet, Sisley to Seurat, and have no idea of their significance or history.

“They give you the little tags with the name of the painting, the artist, the dates, and then they always give who donated the art but they don’t give you anything about the painting itself,” Daisy explains.

She hopes to give people a little of what is missing here – and to help visitors appreciate details they wouldn’t otherwise have noticed. Indeed, despite a swift walking pace during THATLou, I discover entire collections I haven’t seen before.

Little tourists to discover Paris too 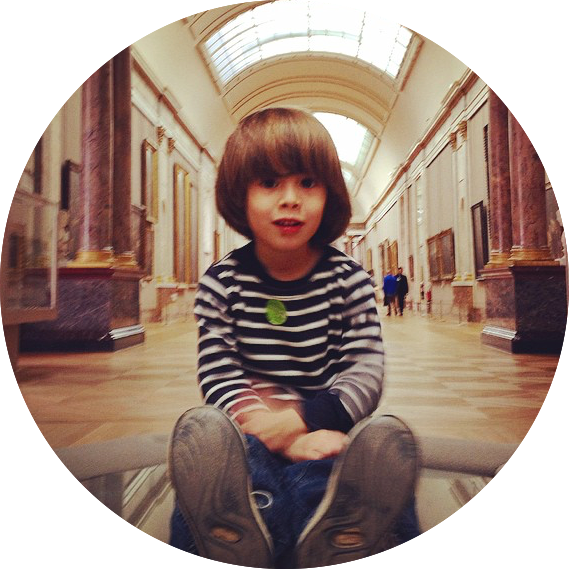 Next, Daisy will focus on getting children excited about art with the ‘THATLou Kid Pack’. “When my husband and I are travelling with Storsh, our toddler, dinner at restaurants can be a test of patience,” Daisy explains. “The idea is that the kids can bring the museum with them to dinner and keep them occupied.” The pack includes a Mona Lisa sticker sheet and spot the difference Botticelli – among other kid-friendly treasures.

With many more possibilities on the horizon, Daisy is hoping to soon make THATLou her full-time vocation. “I could do it tomorrow… but I think I need to wrap my head around it more than anything,” she explains. “I find that the busier one is, the more efficient and productive one is.”

“I feel like Paris is filled with expat entrepreneurs for the simple reason that they’re not willing to go through the process of sending 250 applications and being rejected 240 times,” she continues, referencing her own experiences. She’s quick to add that the process itself is ridiculous. “Starting a business is a more positive way of trying to make a living,” she concludes.

With a startup business in the tourism industry, Daisy does fear she is losing her connection to the ‘real France’. “It makes me feel more remote, not from the French culture, but from France. [THATLou] is so much about the observation of it – because that’s what tourism is… But of course, I’d never give it up.”

Above all, Daisy wants to inspire return visits. “Even if they don’t go back because they’re on a trip, I want them to want to go back,” she explains. “The Mona Lisa is important, and the Venus de Milo is important. I don’t want to detract from them – just because they’re popular doesn’t mean they’re not important. And everyone who goes to the Louvre should see them. But I want them to see paintings quietly also.”

She wants the status of world-famous museums like the Louvre to be more than something that ‘you have to see in Paris’; to restore the experience to what it was originally intended to be: a showcase of significant and stunning works of art.

Have you ever been on a THATLou hunt? If not, how have you found new ways of exploring well-known Paris landmarks? Share your experiences and thoughts in the comments below!