With the 68th Cannes Film Festival recently concluded in Southern France, and while the memory of the Alliance Française French Film Festival still lingers, we at MyFrenchLife™ have movies on our minds. French movies in particular, évidemment!

Since the Lumière Brothers gave birth to what is considered the first movie picture in 1894, the love story between France and film remains original, unique and profound.

Believing that cinema is a window into the soul of cultures, I thought it would be enlightening and fun to look at six of my favorite films français! Beware: this list is completely subjective and personal. However, if you want a slightly more official and objective one, I suggest reading this list of the 100 most beautiful French films according to Gallic culture bible Les Inrocks.

The big screen: An ode to the French capitale

By the way, there is a twist to our compilation: not only are the films we chose French productions, they are all set in Paris as well. Though we love the provinces and their cities, from Bordeaux to Lille, this time we will solely focus on the capital.

Why? For a purely subjective reason (you were warned): I lived there as a young woman and always felt a strong connection between le cinoche (here is some argot for you) and Paris.

Indeed, before becoming a Parisienne, I fell in love with the city through the big screen. Then, living there, I rediscovered Paris endlessly through the eyes and sensibility of movie-makers. And once I left the city I would reminisce about it while catching a film at the theater.

Paris is more than meets the eye, more than the beauty of the twinkling Eiffel Tower at night, the pigeons on Place Saint-Michel and the fashionistas striking a pose during Fashion Week. Cinema – good cinema – will take you to the heart of the matter and capture the essence of this unique place. It will make you fall in love with, rediscover, and reminisce on the subject at hand. So for you dear Francophiles extraordinaires and fine cinéphiles, here are the movies we love that will take you on a very Parisian journey. En route!

Six masterpieces for the true Francophiles 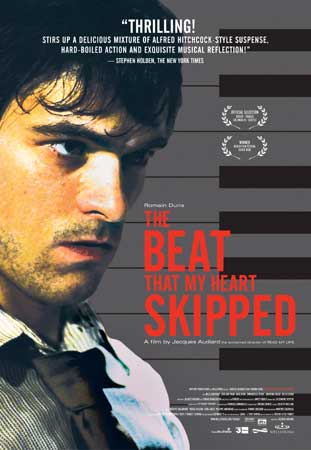 1. ‘Les Enfants du Paradis’ by Marcel Carné – To see how Paris was during la Belle Époque around the boulevard du Temple district.

2. ‘De battre mon cœur s’est arrêté’ by Jacques Audiard (pictured right) – For Romain Duris’ phenomenal portrayal of a young man divided between his passion for piano and his life as a gangster. A dark and contemporary Parisian tale.

3. ‘Polisse’ – This feature depicts the lives of a group of officers of the Paris Child Protection Unit. From the horrific and troubling cases they deal with to their own personal issues, the Prix du Jury it received at Cannes is very well-deserved.

4. ‘Les Amants Réguliers’ by Philippe Garrel – A poetic hommage to Mai 68 with a stunning black and white cinematography.

5. ‘Dans Paris’, by Christophe Honoré – Two brothers and their tribulations in a melancholy Paris. With the Eiffel tower in the background and rive gauche wanderings, the movie is quintessentially Parisian. Extra points for the scene aux Invalides!

Which Parisian films would make your top seven? Let us know in the comments below!