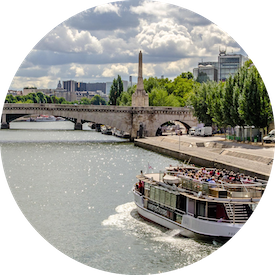 Are you spending summer in Paris? You’re in luck! Life’s good there in the warmer months, so much so that it’s my favourite season of the year.

Far from being a sleepy city, Paris ups its tempo as it moves into holiday mode, swarming with thousands of places and activities to discover.

If you just want to combine summer in Paris with some tips for an escapade – whether it be idyllic, poolside or out of the ordinary – then here’s a quick rundown of our suggestions for things to do or see off the beaten tourist track.

1. Picnic in the Jardin Francs-Bourgeois-Rosiers

Nestled in the heart of the Marais, you’ll find the Jardin Francs-Bourgeois-Rosiers – almost invisible to passersby on rue des Rosiers with its discreet entrance. It’s a delightful green haven, perfect for settling in with a packed lunch and a bottle of white on the grass. 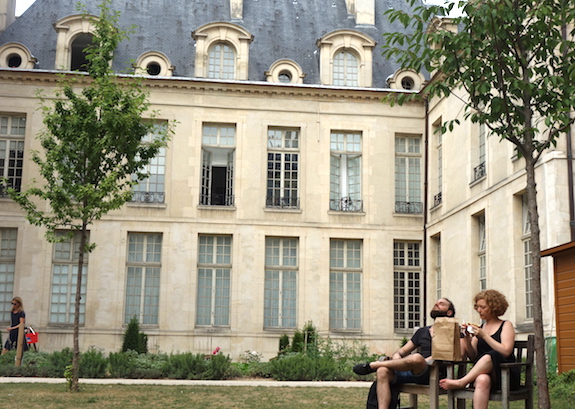 I discovered it by chance while strolling along rue des Rosiers. Only recently opened, and neither too accessible nor well-known, this little leafy gem is the ideal spot for lazy picnics since it’s only open after 2pm.

At the top of the Parc des Buttes Chaumont you’ll find Le Rosa Bonheur. This guinguette gets its name from a female painter of the 19th century, who was passionate about nature and freedom, and the first artist to receive the Légion d’Honneur.

Like all the places where Parisians would slum it on weekends in the 19th century, la guinguette Rosa Bonheur is a festive place where you can eat, drink and dance. It has the old-fashioned, pastoral charm of old country houses. 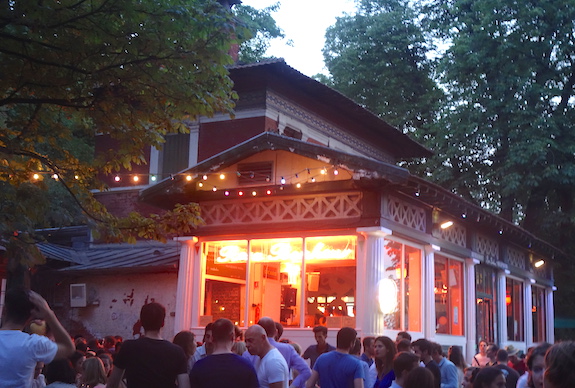 Only open in summer, it’s the place to cool off from those scorching nights. It’s also possible to have lunch or dinner there with their delicious organic meals on a terrace covered in greenery. And at night, when the atmosphere picks up a bit, the terrace is transformed into a dance floor.

3. Have a cup of tea in the garden of the Musée de la Vie Romantique

The name alone will lure you in. In all honestly, I’ll admit I’ve only ever been to the Musée de la Vie Romantique in summer for its tearoom in the garden.

Having a cup of tea in the middle of a paved courtyard surrounded by roses and bellflowers is perhaps nothing special if you live in the countryside, but in the heart of Paris in the 9th arrondissement, it’s not so common. Found between Pigalle and Place Clichy, the tearoom of the Musée de la Vie Romantique is an idyllic place to take a break on a summer afternoon.

4. Have a drink and get up high in the new Perchoir Marais

There’s no doubt that having a drink in the new Perchoir Marais of Le BHV Marais is well worth it. This rooftop à l’américaine opened in mid-June, and like all good new addresses that spread like wildfire, it’s all the rage, attracting a young and trendy crowd. 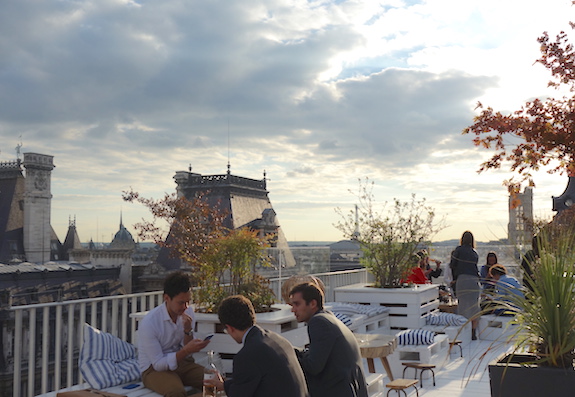 Prepare to wait a bit before you can climb up to the 6th floor of the building, see Paris from above and sip on a cocktail to the sound of electro music. But once you’re up there, curled up on the cushions on the vast terrace, you can admire the magical view over the city, notably the rooftops of l’Hôtel de Ville.

5. Move to the rhythm of the Paris Jazz Festival beat in the Parc Floral de Paris

Each year, the Paris Jazz Festival returns to play every weekend until 26th July in the Parc Floral de Paris. This year’s line-up is a thematic program, featuring the great international jazz scenes from London, Rome, Tokyo, Stockholm and New York. 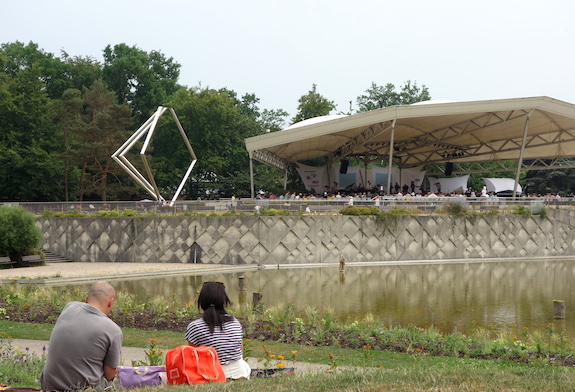 For jazz amateurs like myself, you can enjoy listening to concerts dozing on lawns neighbouring the stage in the large botanical garden. But for the devotees, the semi-covered stage with its stalls allows you to listen to the concerts almost like you would in a classical concert hall: the nuance here being that through the net engulfing the stage, you can see the sky and trees. Exhilarating.

6. Swim in the Joséphine Baker pool on the edge of the Seine

It’s summer and when the temperature throws the barometre into panic, the yearning for sea and beach can become pressing. Perhaps this is the best time to do a few strokes in la piscine Joséphine Baker.

Moored to the Seine, this pool was built into a barge, with its glass ceiling opening to allow swimming in open air. And, if you prefer to tan with a beautiful view of the Seine and the boats, you can always make good use of the enormous solarium, fitted out with deckchairs.

7. Stride past Paris by night on bike and delight in the lights

There is nothing like roaming Paris by night on bike and admiring the stunning streetlights and monuments. On summer nights, when the temperature is a little milder, and once a great portion of the locals have set off on holiday, Paris Bike Tour offers tours to help you uncover nocturnal life in Paris. 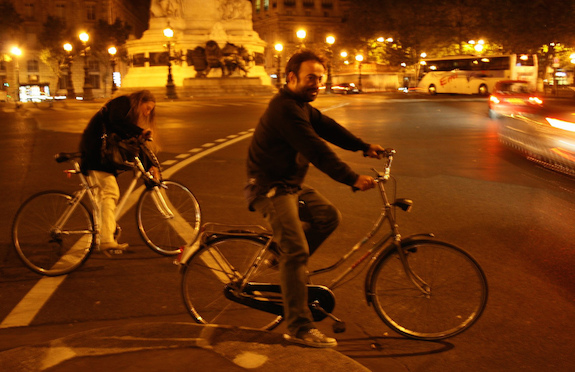 With personalised routes, guided tours or themed rides, the choice is yours. You can also choose to travel alone with a tour guide or in a group,. The tours are organised with professional guides and speakers.

There are secret locations, well kept addresses and exceptional places that exude an aura of exclusivity, and L’Hôtel Particulier in Montmartre is one of them.

Nothing at the run-of-the-mill black gates tells you you’re at the right address, except for an unremarkable doorbell. The first time I came here I thought I had the wrong place. However, as soon as you enter the enclosed garden, you are struck by the magic of the place and the crazy charm of this beautiful Directoire-style dwelling, which features a terrace where you can dine on summer evenings or simply have a drink.

Apart from the elegance of the place and its polished table, L’Hôtel Particulier is a little like a private home, where you feel almost at home. But shh! Let’s keep it between us! If the urge takes you to go there for an evening, or even to spend a night there (as it’s also a hotel), make sure you book in advance.

9. Spend August in Paris and discover a phantom city

As is the tradition, Parisians flee their city in August. Going on holiday for the majority of this summery month is a French cultural practice that’s become almost ingrained. Apart from touristy spots, entire areas are practically deserted by their inhabitants, and several restaurants and businesses shut. 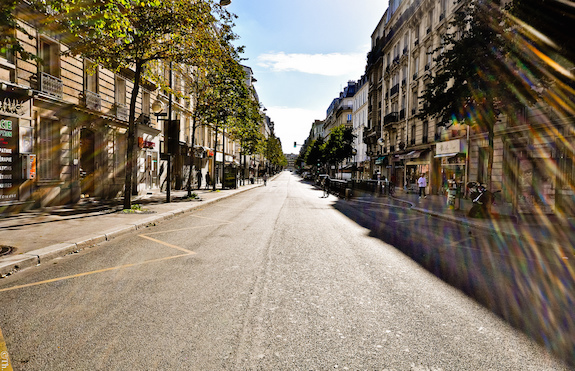 For those of us adventurous wanderers, walk about the streets early in the morning of August 15th. You’ll come across virtually no one and the usual jam-packed, noisy spots open up to all lovers of the city. If you prefer to follow the suggestions of a guide, arm yourself with Unexplored Paris – you’ll discover the city on secret and out-of-the-ordinary excursions.

What are you doing in Paris this summer? We’d love to hear about your adventures in the comments below.