Monnaie de Paris: the last factory in the City of Light 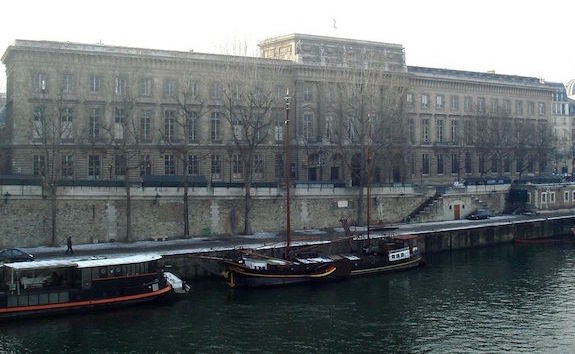 In the 1980s, I lived in one of the most prestigious and historical areas of Paris, tucked between the Odéon and the Pont-Neuf. I would often stroll along rue Guénégaud and give a furtive look at the imposing quarters of the Monnaie de Paris.

Standing in the very centre of the city, with its long, neo-classical stone façade, I often thought the Monnaie de Paris (the Paris Mint) was an impenetrable fortress. It’s hard to imagine the vastness of this building, spread out in an area where the price of apartments has skyrocketed over the past few decades. I was also under the impression that trespassing was forbidden, as it was the guardian of all French treasures and gold!

Hence, I felt honoured to be able to visit the Monnaie de Paris (which is a UNESCO World Heritage Site) as part of a promotional campaign to inform the public of its transformation and opening. The project, titled ‘MetaLmorphoses’, will be completed in 2016. Nevertheless, the public already has access to exhibitions and can even dine at the new Guy Savoy restaurant!

The history of the French Mint goes hand in hand with the creation of the Kingdom of France and the long struggle to unite the country. The Franks, a group of Germanic tribes who had invaded the north-western part of Europe during the 3rd century AD, merged with the Gallo-Roman population over the following centuries to eventually pass over their name onto modern day France.

As soon as France existed as an entity, its monarchs had to assert their power and authority over the different people and regions. This could not be done without a strong, organised and common-to-all currency. However, this did not happen in the course of one day.

An interesting point to note is that the history of the French Franc, in a similar fashion to the metric system, reflects each historical jolt in the course of French society’s modernisation.

It all started with Charles the Bald, 64 years after Charlemagne’s coronation in 800AD. He was the first to take control over the French currency by creating the Monnaie de Paris, an administration charged with issuing coins as well as producing medals.

The Hôtel de la Monnaie, designed by Jacques-Denis Antoine and located in the sixth arrondissement, was constructed between 1767-1775. Around this time, it was necessary to centralise coin making so that Louis XVI and his newly appointed Finance Minister, Jacques Necker, could take full control.

Ironically, for the exact opposite reason – the need to decentralise – industrial minting was moved to Pessac, near Bordeaux, in the 1970s. Artistic production, however, would remain at the Paris site. This is still the case today, as the activities of the Monnaie de Paris also includes making medals, trophies and other items.

During my visit of the engraving and foundry workshops, I was reminded that the Monnaie de Paris is, astonishingly, the last factory left in the centre of the capital. The artisans at work are perpetuating a 1000-year-old tradition of French art, executing the same techniques and gestures used in the Middle Ages. It’s no wonder they are internationally known and produce coins for other countries all over the world.

At the end of this fascinating visit, I found that the real treasure was not the gold, but instead the creative passion and skills of the outstanding artists of the Monnaie de Paris. I find that extremely moving.

Have you ever visited the Monnaie de Paris? Are you planning to visit it in 2016 to learn more about its transformation? Share your opinions in the comment box below!