Editor’s note: This article was written just before the 13 November 2015 Paris tragedy. We have decided to publish the original content, rather than editing it to incorporate references to the attacks.
In the wake of these tragic events, the key topics dealt with in this article remain unchanged, and are all the more relevant today. The book discussed was written in the aftermath of the Charlie Hebdo attacks and addresses the same questions the French are asking themselves now. 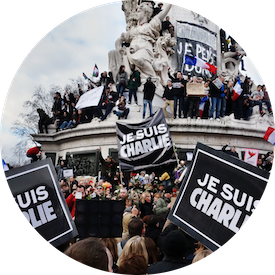 Since the events that shook French society on 7 January 2015, the leitmotif that inundated the entire internet sphere, ‘Je suis Charlie’, has contributed more to the survival of the French language against the hegemony of English than have decades of desperate efforts to preserve it.

If I were a teacher of French as a foreign language, I would start my first lesson to absolute beginners with this sentence written on the blackboard.

Amidst the great flood of people who marched in Paris on 11 January 2015, another phrase stood out on a post, an apparent statement that triggered more questions instead of confirming the hope and comfort confused French people were trying to find. In a brilliant twist and declension, ‘I am’ became ‘we are’, and ‘Charlie’ was replaced by ‘la France‘: ‘Nous sommes la France’.

This word play did not escape the attention of political journalist Natacha Polony, a brilliant and respected figure in the French media.

I would not be surprised if her newly published book, the matter-of-factly titled ‘Nous sommes la France’, became a national bestseller of non-fiction literature.

A year of dangerous living: the book in its social and economic context

The Unity March only lasted for a day. Dissonant voices rose quickly afterwards. The negative form of ‘je suis‘ started to be voiced in the media, in the streets and at schools. 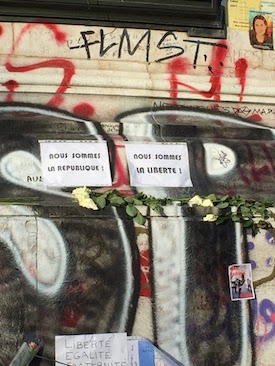 On the grounds that they were “not Charlie”, some students at suburban schools did not observe the national minute of silence in homage to the victims of a still traumatized nation. This triggered a profusion of reactions on all sides.

Now, at the eve of the United Nations climate change conference (COP21), discontent is widespread throughout France. With an unemployment rate rising faster than global warming, strikes regularly breaking out, and the questioning of the socialist government’s authority (often criticised as being too weak and inefficient by some and too liberal by others), nobody is satisfied.

Facing this context of unemployment and social unrest, as well as the recent terrorist attacks, the French are divided and have lost their bearings.

Added to this is the migrant crisis and the rise in popularity of the National Front party, who are luring in more and more disgruntled people (whose bitterness often leads them to confuse the issue of religious terrorism with that of the migrant crisis), and you can easily picture the complete disarray – or at least, what seems to be.

Who is ‘nous’ and what is ‘France’: Polony’s take on French national identity

In her book, the French essayist often turns to French history to discuss the major identity crisis France must overcome, even if it is not for the first time. However, in our modern society, this question takes a different turn and must not be underestimated.

Polony admits that the prevailing politically correct attitude can be as much a barrier to finding a solution as the far-right intransigence. Her reference to the tyranny of vocabulary is a particularly interesting illustration. When the French president, for example, used the expression ‘français de souche‘ (as opposed to French from where?), it unleashed a barrage of criticism.

Polony also regrets that, at some point, detractors attempted to turn the culprits of the Charlie Hebdo attacks into victims and blame France for their crimes. 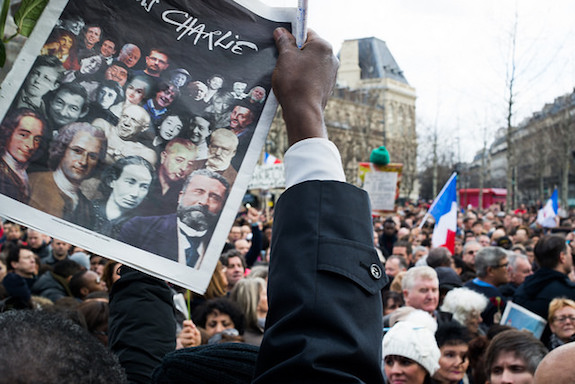 Hence, there is an absolute need for the French – all of them, with no exception – to recognise that they share a common destiny and common values. In that perspective, the responsibility lies within the classroom to teach French history to all, and to reintroduce the study of authors who have shaped this country. These are what make France what it is, and is what the French people should have in common beyond their differences. Cohesion is the keyword.

Therefore, if ‘we are France’, the time has come to call a spade a spade, and to clearly answer the taboo question of national identity. France is more than just an administration run by technocrats. It is a mosaic of ‘terroirs’ and diverse landscapes that makes it the most popular tourist destination in the world.

When asked how she would define France, Natacha Polony quoted two beautiful words: ‘la vergogne’ (an old word which means the opposite of arrogance) and ‘la ferveur’.

This book is for anyone eager to understand France: its present, past, culture, political debates and state of society. Polony does not force readers to agree with her point of view; rather she gives them the freedom to make up their own minds.

It is not necessary to be fluent in French to read through this 200-page essay. Clear and direct, the former teacher of French writes using modern language in a very fluid and elegant style. 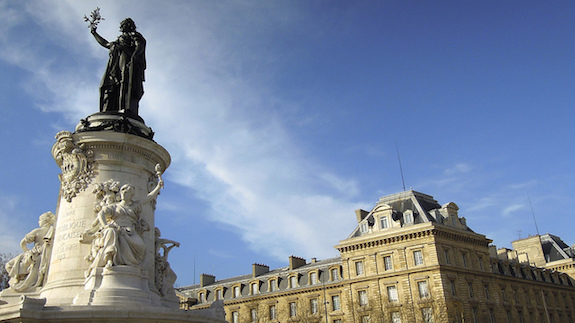 Lastly, this treatise on France struck a very emotional chord with me. As I was turning the last page, I realised Polony perhaps did not only intend to discuss French national identity. I could hear another, more profound message: a moving declaration of love for the country of France. And this was worth a thousand ‘La Marseillaise‘.

Really, who would complain about that here at MyFrenchLife™?

What are your thoughts on this debate? Join the discussion in the comments below.