Susie Morgenstern is a well-known author of children’s and young adult literature in France, with dozens of books to her credit. She has been the recipient of numerous awards, and decorated Chevalier des Arts et des Lettres by the French government. Her latest novel ‘Jacques a dit’ tells the story of her life. 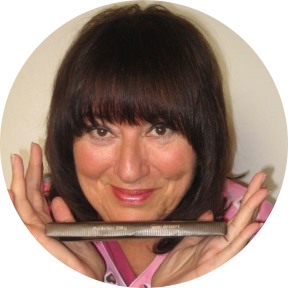 Walk into virtually any library or bookstore in the country and you will find Morgenstern’s books prominently displayed. Sit in on a middle school French class and you may hear a twelve year-old giving an approving oral report of her best-seller ‘La Sixième’. It has sold over one million copies since its publication in 1984 and been translated into half a dozen languages.

From New Jersey to Nice

Morgenstern began writing in English as a child growing up in Belleville, New Jersey. She learned early that in a voluble family of five, where almost everybody had an opinion, putting your thoughts down on paper was probably the best, and sometimes only, way to make yourself heard.

In high school, she played bass in the orchestra and was editor-in-chief of the school newspaper. She studied at Rutgers University and The Hebrew University in Jerusalem. There, on a summer morning in 1963, she met Jacques Morgenstern. 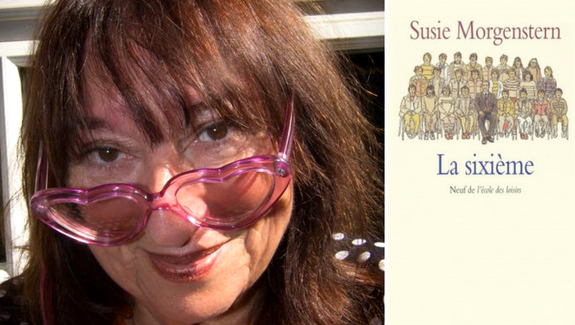 Jacques was a young French mathematician who was attending a colloquium at the university. Susie spied him from a distance in the university cafeteria; he was tall, as was she, with curly black hair and a beard that, she later wrote, was as impressive as those of the Hebrew prophets. She walked across the room to introduce herself. She was just eighteen and could speak only a few words of French.

Morgenstern’s husband’s words ring throughout the book, taking on growing authority, as surely as in that children’s game, ‘Jacques a dit’

After the couple married, they settled in Nice where Jacques had grown up, and raised two daughters, Aliyah and Mayah. It was Mayah’s struggles in sixième (6th grade) that led Susie to write a book about a spunky student named Margot. In France, Susie had gone back to school herself, earning a doctorate from the University of Nice. When Jacques died of cancer in 1994 the couple had been married for nearly 30 years.

‘Jacques a dit’ – for adult readers 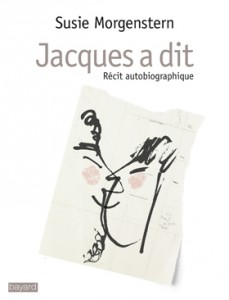 Now, Susie has published her first book for adults, ‘Jacques a dit’. It’s an affecting love story. Susie steers readers through her early years of marriage, revealing what made them often difficult. Linguistic and cultural differences played their part, but so too did fiercely opposing personalities. Susie was voluble, affectionate and painfully honest. Jacques was quiet, reserved, and ultimately, private.

There have been plenty of books written about English-speaking women who meet and marry Frenchmen, and about how they learn to live together. But few are as deft and disarming as Morgenstern’s. Beyond being a love story, or even the story of a marriage, this is about the mettle of a man – Jacques’ character, ways of thinking, and his idiosyncrasies.

Virtually every chapter begins with “Jacques said”; Morgenstern’s husband’s words ring throughout the book, taking on growing authority, as surely as in that children’s game, ‘Jacques a dit’, or ‘Simon says’. You do as you are told but only if the command is prefaced by those three words.

Ultimately, this is an astute book about family and about Jacques’ parents. It especially focuses on Susie’s mother-in-law, whom she describes as a rock, a Biblical Esther who is sometimes difficult to fathom.

Importantly, the book covers the experience of being Jewish and living in France through and after World War II. Jacques’ father was deported to Auschwitz but survived, as did Jacques’ mother by running from one French hiding place to the next. Jacques and his brother Joseph were hidden as children. The scars are indelible, inescapable.

The book is in French and there are no plans to translate it into other languages. It’s such a great pity as this is a great book.

You can buy ‘Jacques a dit’ here.

Find out more about Susie Morgenstern and her book in her interview.

Have you read ‘Jacques a dit’? What did you think of it? Start the discussion in the comments!