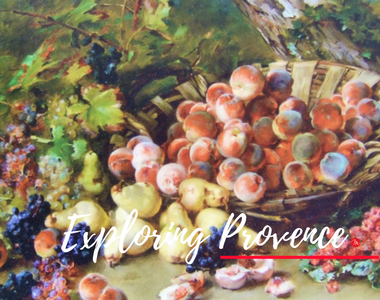 From the beginning of May until the end of August, there is an unusual art exhibition in Les Arcs-sur-Argens. It is not in a gallery, but in the street and made up of a series of large canvas posters showing the lives and works of two of Les Arcs’ most famous artists.

In this post I will feature the first – a nationally famous watercolourist of the late 19th and early 20th centuries – called Madeleine Lemaire (1845-1928). Her talent for painting must have been well evident already as her first exhibition was held in 1864, when she was just 19 years old. Born in Les Arcs, she moved to Paris at the age of 12.

Her work is extraordinarily accomplished, and though I am not particularly a fan of her style of painting, I can appreciate the mastery of her design and knowledge of colour. She was a member of the French Society of Watercolourists but also a good oil painter, compatible with the finest academic painters of her time.

Her paintings of flowers and fruit are among some of the best examples of late 19th century art and she was also accomplished at portraits and figure painting.The second half of the 19th century was an extraordinary period throughout the world for art and is renowned for the great paintings produced during that time.

Salon at the studio: a frequent exhibitor

In 1886 she created a ‘salon’ at her studio where artists, writers, politicians, musicians and actors were welcomed. In fact it became one of the most brilliant and best frequented salons of the Belle Epoque, located in the Faubourg St Germain. As well as frequent exhibitions in Paris, Madeleine’s work was also represented at the Venice Biennale of 1898 and exhibited in London in 1903.

She became Professor of Design at the Museum of Natural History in 1899 and in 1906 was presented with the Chevalier de la Legion d’Honneur.

While she maintained her studio in Paris, she also lived at her home, the Chateau de Reveillon in the Marne, not far from Paris.

It was in there that she died in 1928. Interestingly the exhibition here does not say whether she ever returned to Les Arcs, however if she did, I’m sure they would have mentioned it. None-the-less, the town is very proud of her.