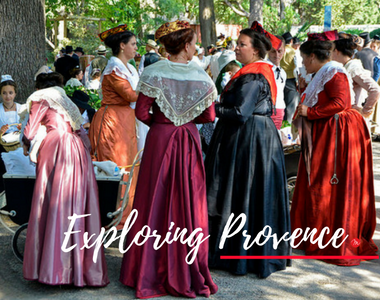 I’m intrigued by the traditional Provençal costume! I have always loved fabrics, sewing and needlecraft – and the idea of countries having a national costume.

I remember at primary school trying to design a ‘wattle’ costume – something like Snugglepot and Cuddlepie (without the bare bottoms) as an Australian national costume. So I was delighted to find, when I visited Grasse this year, that the Musee Provençal du Costume et Bijou was exhibiting a collection of ‘costumes provencaux‘.

The clothes and jewellery are part of a collection of Arlesienne costumes by Magali and Odile Pascal. They show the incredibly detailed and beautifully sewn and embroidered clothes once worn by the women who lived in the Arles region of the Midi.

The costumes across the south of France are similar in style, with colours, embroidery patterns and materials varying from region to region and from the peasants to the artisans to the well-off. I have inherited a beautiful, traditionally-dressed doll in Mentonnais costume from my belle-mere – mother-in-law – who was born in Menton.

The doll’s skirt is striped in red and white, her black shawl is beautifully embroidered, as is her apron. She wears the wide-brimmed hat of most Provençale women of the time. These hats could be clipped to the women’s waistbands after work finished for the day and the sun went down. The skirts were often heavy and quilted – nice for winter – but I don’t know how the women managed in summertime. The blouse would be topped by a shawl or a shawl-like collar, and a long apron tied around their waist.

Interestingly, the Arlesienne women often wore elaborately tied ribbons in their hair, winding the wide, embroidered or patterned material around their hair to protect and decorate it.

Headwear was always worn and the hair pinned up. Not only did it keep the hair clean and tidy (there was no washing it every day), but it also was part of the woman’s modesty.

A taste of Provençal fashion

I regret not buying some of the beautiful ribbons I saw on display during the Medieval Festival in Les Arcs. The exhibition was fascinating. The late Helene Costa – of Fragonard fame – had a passion for collecting traditional costumes and jewellery of Provence. Her collection is generally the one on view at the museum.

I would encourage anyone visiting Grasse to take the time to enjoy whatever exhibition is on. It is a fascinating insight into the past, while helping to preserve the distinctive heritage of the region’s national dress.

Do you know the national dress of your country? What is your favourite aspect of the traditional Provençal costume? Join the discussion in the comments below!