To agree or to disagree – le Bulletin ‘Conversation’*

Last week I ‘put myself out there’ and it felt good!

I continue to call on you to not only be there for me but to really ‘challenge me’ and to tell me if you ‘are in’ and prepared to take on that role… I’m looking for more of you to agree to keep me accountable!

Thank you to those who got involved in the comments section last week and so many others who emailed me privately (some with very private discussions) – I love that you’re so engaged, it means a lot to me! And I love that you ‘get’ what I’m talking about.

I’ll admit that I’m surprised that I haven’t heard from more male readers, though – why do you think that is? I know that you are there because you email me often. Is this topic more of a female topic perhaps??? Tell me please – in the comments.

And I’d love to hear more of your stories about how you’ve become more ‘true to yourself’, ‘more direct’, ‘more honest’, less afraid of expressing your thoughts. Please share with me and please feel free to comment on/reply to others in the comments.

If you missed the Conversation last week about ‘My big challenge’ you can read it here.

Privately, I received quite a lot of commentary on the Anglo-French cultural differences expressed in this section in last week’s Conversation:

You see…
I don’t think that our ‘anglo’ culture sufficiently encourages this behaviour! Interestingly, I believe that French culture is better at it than the Anglo culture. We are not, in my view, actively encouraged to disagree, to criticise or to argue for that matter. Disagreement and criticism are thought of as being negative and hence to be avoided.

In fact…
Few of us seem to have well-honed skills to constructively debate, or criticise without becoming either offended or worse, aggressive or defensive!

And more particularly…
We’re often too concerned about being either ‘politically correct’ or even so polite or well-mannered, that we don’t even dare to go there!

And importantly, I also received feedback from a couple of French women, both dear friends, who said they didn’t really understand ‘my big challenge’. Thank you to both of you – it’s so important that I know this! Perhaps this ‘Conversation’ will help put it more into perspective for you. Let me know, please.

Whereas a few French people who’ve spend time in the Anglo world ‘got-it’.

This gave me to start thinking more about cultural differences and to go seeking the views of others.

From my library, I pulled this selection from which to draw inspiration, examples and perhaps even views opposing mine. 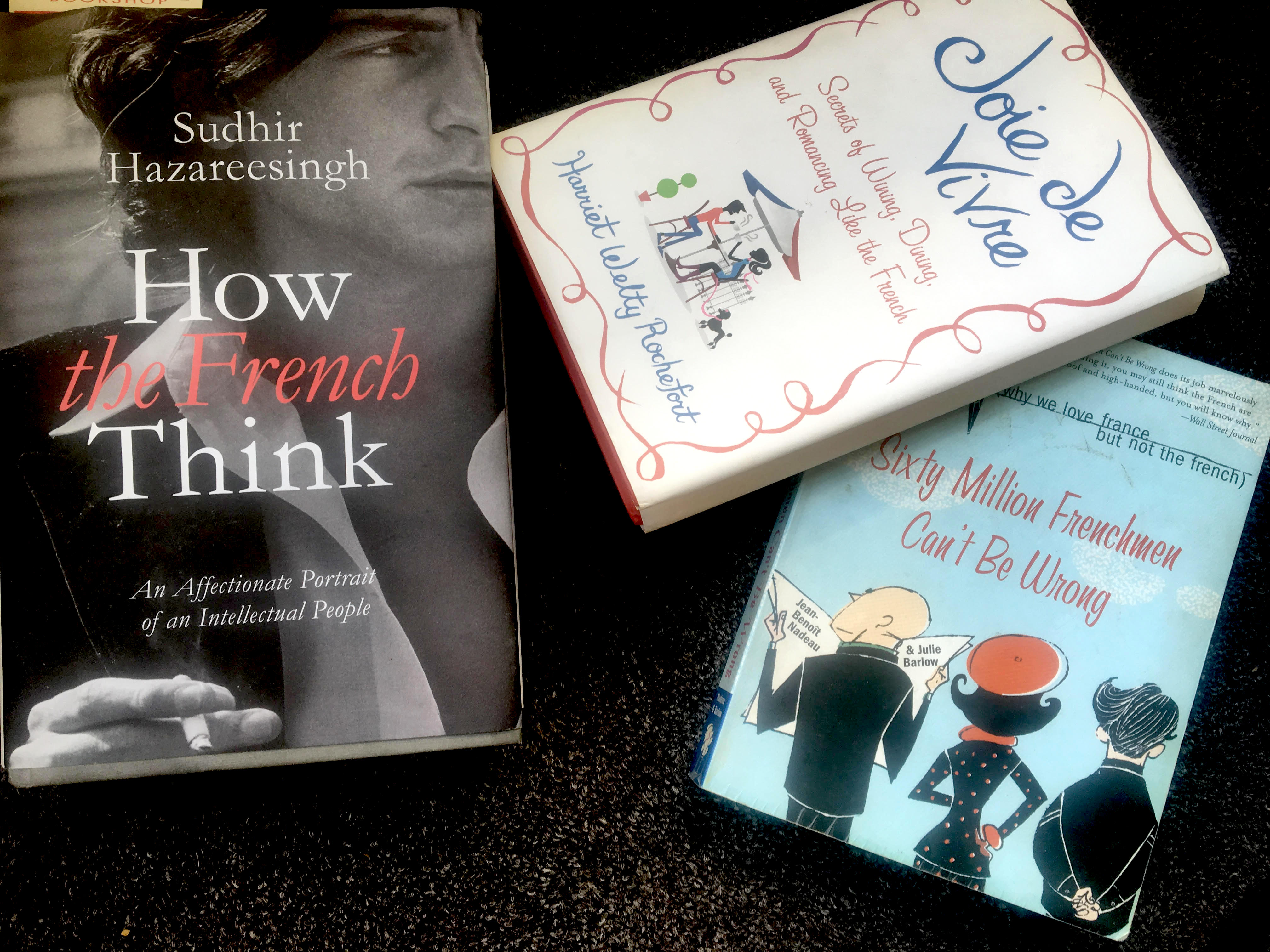 In ‘How the French Think’ by Sudhir Hazareesingh, a wonderful read about the history of France, the French, culture and intellectualism and under the heading ‘An exceptional nation’ there was this gem:

… trying to prepare its servicemen for the singularities of the natives, a British Army manual issued before the Normandy Landings in 1944 observed ‘By and large, Frenchmen enjoy intellectual argument more than we do. You will often think that two Frenchmen are having a violent quarrel when they are simply arguing about some abstract point.’…

Then in Harriet Welty Rochefort’s book ‘Joie de Vivre’ which is all about the secrets of wining, dining and romancing like the French, there is an entire chapter on this theme: ‘Having Fun while you Disagree’ and it’s so on point! If you don’t have this book, you should, as Harriet really ‘gets’ the French and she tells her witty stories with wry humour and authority. It’s a great read and useful reference book.

I feel compelled to quote from Harriet: “The one main thing to know about the French is not that they disagree but that they LOVE to disagree.”

And herein lies that cultural difference! The Anglo culture seeks agreement and consensus at almost any cost whereas the French culture thrives on disagreement.

Harriet says: “ …I’d wager that if you took contention and discord out of French life, you’d remove a huge slice of their ‘joie de vivre’. Disagreeing is not just a Gallic game, it’s part of their lifeblood.”

“In ‘Anglo’ cultures you do not show emotions and certainly do not voice disagreement or lose your cool… [Whereas] They [the French] are so… combustible!” says Harriet.

One of the important skills to master is how to disagree without getting personal. Harriet speaks of this, “I cannot imagine discussions I’ve had or heard in France in an American context. By about the second or third controversial point, both parties would be mortal enemies. In France, no one’s going to change his or her mind, but the adversaries don’t get personal. They may totally disapprove of, disagree with, and reject the other’s point of view but remain friends.”

The point I find fascinating is that a discussion is usually a stimulating intellectual exchange with the French whereas all too often for us, a discussion becomes an argument, it becomes personal and it’s a bloody battle and the outcome may well be that we are no longer friends basically because we hold opposing views. Our challenge is to cause the other to change their view to match ours or they are no longer our ‘friend’.

Harriet goes on to discuss numerous other interesting topics many of which are stories and liberally sprinkled with examples: ‘Consensus is Boring’ and ‘Being Right is So Much Fun’ and she goes so far as to say that dissension is in the DNA of the French.

I’ve always enjoyed Jean-Benoît Nadeau & Julie Barlow’s book ‘Sixty Million Frenchmen Can’t Be Wrong’ (with thanks to Cole Porter for the title inspiration apparently). Published in 2003 and so now a little dated, but it remains oh so interesting!

This is a study of the French and how they think. In my view, this book should be in the library of all Francophiles. Another compulsory read which Nadeau and Barlow refer readers to is by French ethnologist Raymonde Carroll called ‘Cultural Misunderstandings’. They say,

Carroll is married to an American ethnologist… She says the typical American couple seeks to display harmony. American spouses rarely contradict each other in public, but instead, try to show support for one another. Arguing and criticising one another in public is regarded as distasteful, if not dysfunctional. It’s something you do in private. The French expect exactly the opposite…

“Conversation … has a different function in both cultures…”. I’ve not read this book yet, but it’s now firmly on my list!

If I were French…

So, taking all of this on board, and I’ve realised that if I were French, then I don’t think I’d understand ‘My big challenge’ either.

But to me it’s real! And I want you all to challenge me not only to learn to be better at disagreeing but to do so to be true to myself, to learn from it, to help me be my best possible self!

Are you in? please let me know your thoughts in the comments section.

Perhaps you have some stories to share as well. I’d love to hear them.

C’est tout pour aujourd’hui – That’s all for today – See you in le Bulletin and the ‘Conversation’ next Saturday!

PS: * What is the le Bulletin ‘Conversation’?
– Le Bulletin is the private weekly newsletter for MyFrenchLife.org community members. [Join and you shall receive.]
– Le Bulletin provides your weekend French immersion: our newest magazine articles to help you ‘Frenchify’ your life!
– The ‘Conversation’ is a weekly essay; a conversation of sorts, between Judy & members.

As we are a community comprising many curious Francophiles, myself included, there is no limit to the themes we cover in the ‘Conversation’! Each ‘Conversation contains at least one theme which can range from the meaning of life to French fashion to travel and experiences in and/or from France.

It is intended to be thought-provoking and often takes a philosophical approach to the challenges of life, relationships, careers, self-awareness and self-improvement.

We’re open to theme and topic suggestions and we dare you to disagree!