550,000 people from France and from dozens of other countries around the world visited the 82nd La Fête de l’Humanité in Paris on the weekend 15 to 17 September. I was one of them!

L’Huma was established in 1930 in the name of ‘proletarian solidarity’ and is a household name in France and it’s almost a rite of passage for French kids passing from adolescence to young adulthood. But it’s also very popular with families and older people.

Anyway, I too have now ‘DONE l’Huma’.

I was invited to go by a local farmer and politician and what an amazing adventure it was.

I was totally out of my comfort zone, in a strange environment and on my own for the first time in many years. But it was extremely well organised, amazingly interesting, exciting, inexpensive and with tons of stuff to see and do.

In a word, simply ‘wonderful’.

Here are some of the l’Huma highlights:

This year, ageing monstre du rock américain, Iggy Pop flew in from America, as Le Figaro put it, “to set the stage alight.”

You get the idea though don’t you – even if you don’t read French?

L’Huma in the past…

Big names from the past include Stevie Wonder, Pink Floyd, The Who, Deep Purple, Jacques Brel, Johnny Hallyday, Leonard Cohen, and Joan Baez.

So what is l’Huma all about?

l’Huma is much, much more than simply a three-day music concert.

Although it certainly is that, with continual audience participation in the form of frenetic dancing and singing—but it’s a cultural event as well. There are over 500 stalls, stands and exhibitions, including French departments, cities and regional areas. Plus it has the stands of countries from around the world, feminist organisations (like Clara magazine’s femme’s solidaires), an espace debats, a village du sport, a Radio France studio, social forums, photo exhibitions, street art, a book village… and a cinema venue. 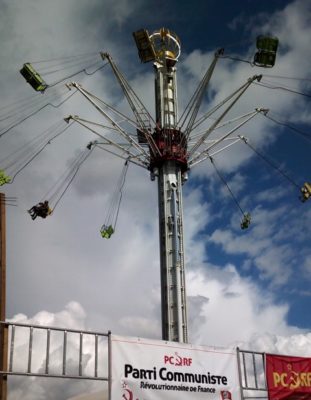 There’s a special area for kids too with creative experiences, games and sport!

Whatever your politics, if you’re in Paris next September, you should put La Fête de l’Humanité high up on your list of things to do when you’re there!

What in the world could be better than an autumn weekend in Paris listening to music performed by top-ranking French and international artists, eating and drinking at a very wide range of outdoor pop-up bistros serving good food and wine—and all this in a wonderful outdoor setting?

A feast for the eyes

The best way to share the colour of my experience at l’Huma is with my photos – beware politics, nudity and music!

Dress code? Dress up or dress down for the occasion 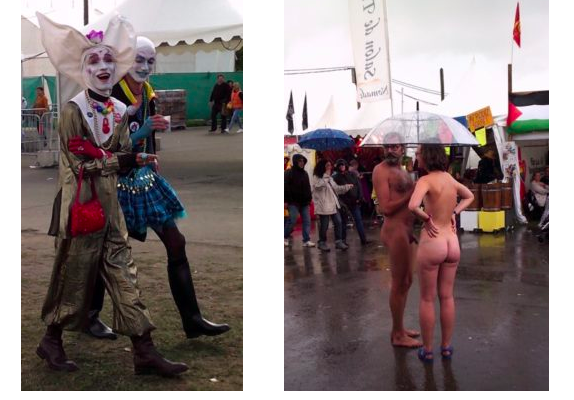 You’re expected to take a stand 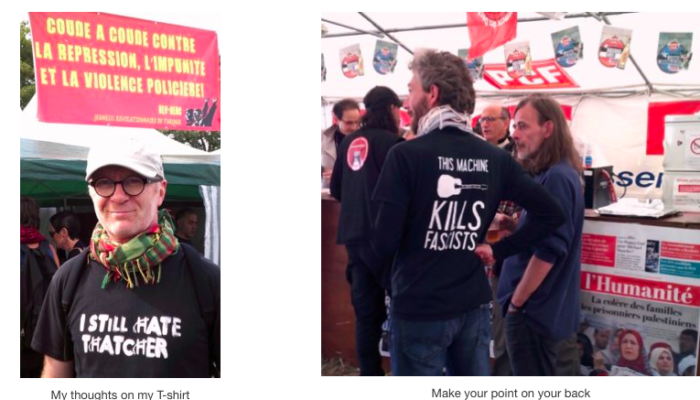 Listen or participate – you choose 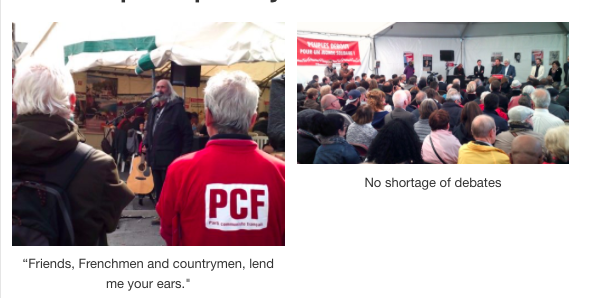 A weekend of eating, drinking and even sleeping politics 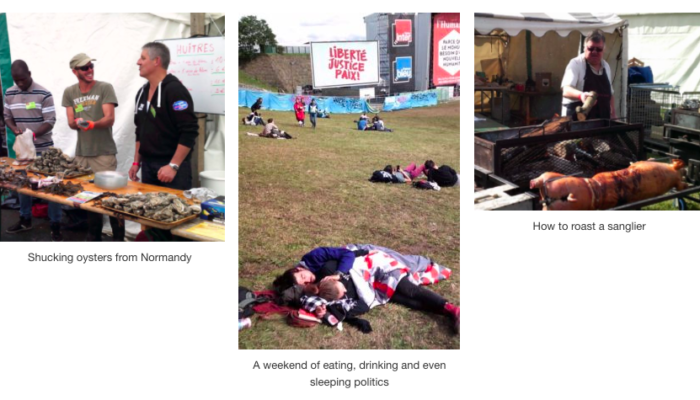 Politics, confusing urinals and so much more… 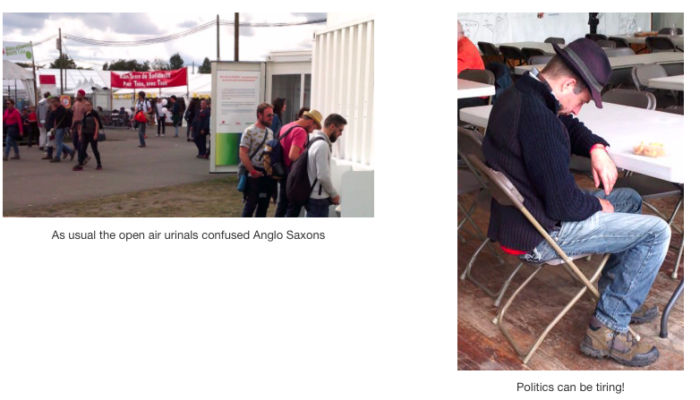 See you there next year?

Have you ever been to L’Huma? Or are there other similar events in France that you can recommend? Share your thoughts & experiences with us below.

1. 550 000 mercis via fete.humanite.fr
3. Iggy Pop via le Figaro
2. and all other images courtesy Ray Johnstone