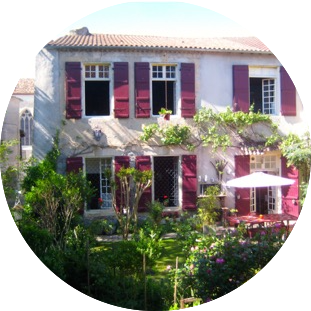 “What? You’re telling me that this house, that you live in, is more than eight hundred years old?” This is the usual response we get when showing guests around our home in Gascony.

The house is officially classified as the same age as the twelfth-century church, St Jean-Baptiste, which dominates the village square only a few paces from our front gate.

There’s a beautiful view of the church from my studio window, and I’ve painted it many times.

It’s a medieval masterpiece and well worth a visit. The two main things to look out for are:- 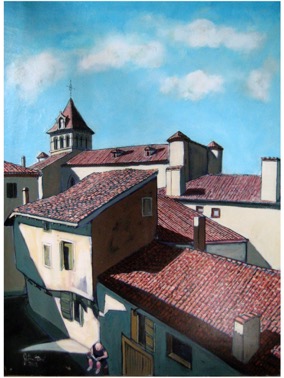 When our neighbour, Marcel, arrived in Mézin as an apprentice baker in 1956, he described it this way:

According to Marcel, at that time you had to book a table at the Bar du Commerce if you wanted a game of belote.

And there were at least a dozen games of pétanque on the go in the church square.

And we even had an active bordel.

But when I taxed him on who the customers were, I drew a blank. 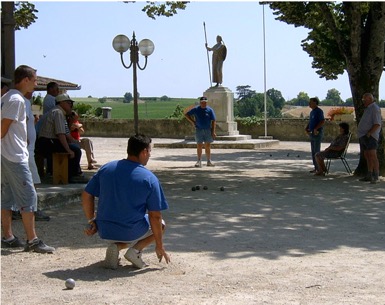 Perhaps because so many of them are still around—though the brothel is long gone.

Although Mézin is still a thriving, rural Gascon community in southwest France, in the middle ages it was a bustling medieval community.

It was also a popular étape on the St Jacques route to Compostela, which runs through the centre of the village.

Armagnac and foie gras are both very important to the region. The famous digestif is similar to Cognac and was a favourite of Hannibal Lector. Although this is not often mentioned—for obvious reasons.

A few years before we moved to Mézin, Quentin Crewe, the English foodie and restaurant critic, came to the village to research the mystique and drama of making Armagnac. 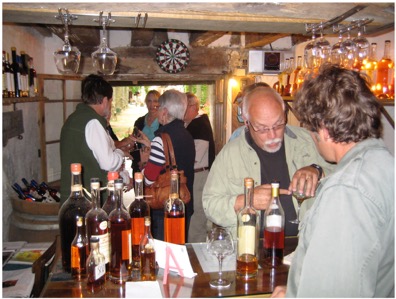 He’d heard about Monsieur Dubourdieu, a local distiller of renown, despite his unorthodox methods. He used a Heath-Robinson still and barrels were strewn everywhere.

A friend of Crewe’s described how he’d arrived at the chai one day when everyone in the family was engaged in that year’s Armagnac production—plus the slaughter of a pig.

Everyone, that is, except granny. She’d just passed away and was laid out on the kitchen table. But, the farm work and Armagnac production took precedence over the old lady.

She could wait, it seemed, until the important business of butcher’s work and the distilling that year’s vintage had been attended to as a priority.

Mézin: an endless source of intrigue

Cork oaks grew profusely in the area and huge numbers of corks were produced. Unfortunately, all this changed when the Portuguese started producing cheaper composite corks and metal caps took over as bottle stoppers.

But, you can see a wonderful display of how the locals processed the oak into corks by the millions, for the wine bottles of Bordeaux.

A head and shoulders bust of Armand Fallières, President of the French Republic in the early 20th century, and born in Mézin, is right outside the Mairie.

Pre-WW2 photos show a full-length statue of the President on a plinth. When I asked about this discrepancy, the pétanqueurs, told me…

Ces cons de nazis. During the Occupation, the Germans took the bronze statue away and melted it down to make bombs—which they used against the Allies.

Alas, after the war, money was short, and a bust was all the village could afford. 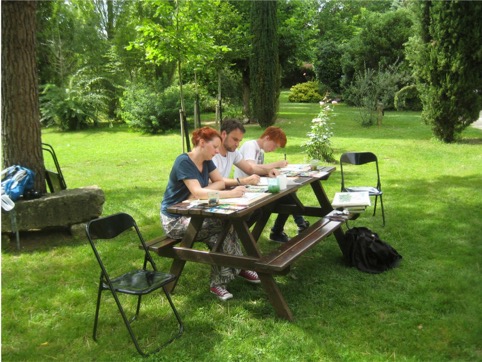 Australians, Ray and Lynne Johnstone, have lived in Mézin for almost twenty years, where they run a live-in painting school.

I’m quite widely quoted as saying:

Everyone, yes, I mean everyone, can learn to paint and draw,… I’m not saying I’ll turn you into a Michelangelo or a Rembrandt, but I can guarantee that you’ll take home some very credible watercolour souvenirs of your painting holiday at La Petite Galerie. 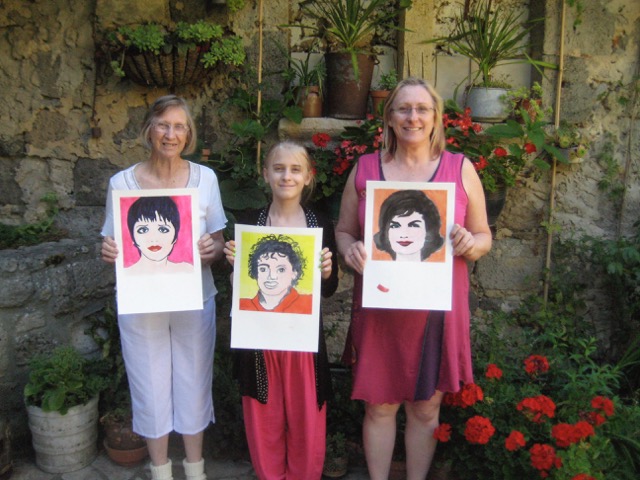 Why not click here and give it a go?

Have you been to Mézin or other such historic villages in rural France? Which villages are not to be missed in your view? Share your thoughts and views in the comments box below.