What in the ferl-en is verlan ? 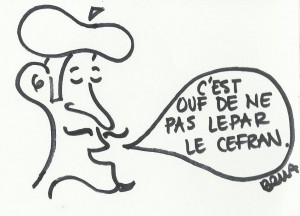 If you’ve overheard teenagers speaking French lately, you’ve probably heard some verlan. Verlan is, after all, the language of youths, intended to distinguish between those who are in the know and those who are not. That is to say, in its origin, verlan was a marker of social identity and was used to communicate about taboo or personal subjects, like sex, drugs, race and money.

Fortunately for us Francophiles, the process of verlanisation has somewhat recently become widespread in its popularity and is no longer inaccessible for those outside of a specific cultural ‘group.’ It is still typically spoken by teenagers in Paris, but many individual terms have been adopted by the general population. In any respect, it is certainly an important linguistic phenomenon that is playing a large part in the framework of modern communication.

Contrary to popular belief, verlan is not a recent occurrence. Its usage has certainly increased within the past few decades, but the process has existed for literally hundreds of years. Indeed, the first word reported to be verlanised was bonbour, an inversion of the house of Bourbon from 1585. Verlanised words continued to crop up now and again from that point on, including calling Louis XIV sequinzouil (1715), as well as souillart (art-souille) and Lontou (Toulon) from the 1800s.  During World War II, verlan’s cryptic function was found to be very effective for encoding messages among allies. During the 70s, verlanised words were widely used by gang members and youths living in the banlieues of Paris, which is likely where verlan picked up its reputation for being associated with secrecy and violence.

Nowadays, verlan is no secret. Its usage was greatly popularized by Renaud’s song Laisse béton (1977), and its status continued to climb during the 80s. In the 90s, verlan became an attractive linguistic force for rap and hip-hop artists. This last phenomenon, along with the interconnectivity of the Internet, has made verlan widely accessible to most everyone these days. In fact, a few words from verlan have even entered into the dictionary- notably keum (mec) and keuf (flic). And, if you’re having trouble understanding the teeny bopper beside you on the tromé, you need only to buy yourself a lexique français-céfran.

Verlan itself is not actually a language, but is instead an open-ended process of creating slang that can be applied to virtually any word. The number of syllables in the word of origin determines the type of process that is applied.

Most verlanised words are disyllabic, probably because this is the easiest and most regular of all the methods. For the word café, for example, we separate the syllables into ca and fé, then simply reverse their order to get féca.

Monosyllabic words are a bit trickier and depend on whether they are open or closed syllables. A monosyllabic word that ends in a vowel is said to be open. To subject the open syllable chaud to verlanisation, then, we merely have to move the front consonant sound to the end of the word, resulting in auch.

Before applying the inversion process to a closed syllable word, we must first add a ‘schwa épenthéthique’ to the end of that word. Thus, grave becomes gra-ve (wherein ve rhymes with je or ne). Gra-ve then becomes ve-gra after inversion. Finally, the last vowel sound is dropped and we are left with veug.

For trisyllabic words, there are three possibilities for the order of the syllables.

1.     Move the first syllable to the end, such that rigolo becomes golori.

2.    Move the last syllable to the beginning, such that vérité becomes tévéri.

3.     Switch the first and last syllables, such that portugais becomes gétupor.

Now that you know more about the process of creating verlan, I’ll let you try your hand at deconstructing it. Here are some examples of commonly used verlanised words ; see if you can figure out their meanings !