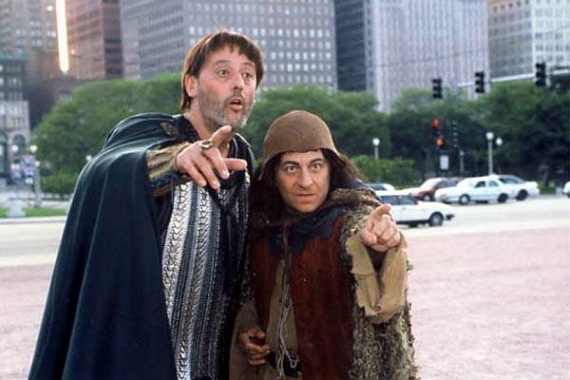 Happy Friday everyone, and welcome back to French Film Friday!

I woke up this morning and thought, ‘I could sure use a laugh today!’ So this week’s list is made up of movies that make me stop caring about how heavy it’s raining outside and just make me laugh out loud.

I’m told this is something of a cult film. Jean Reno and Christian Clavier star as a 12th century knight and his servant who accidently tavel through time and end up in 90s France. Shenanigans and hilarity ensue.

François Pignon (Daniel Auteuil) is having kind of a rough week – his wife’s leaving him, his kid’s ignoring him, he’s about to get fired. He’s all set to throw himself off a balcony when a neighbour interferes with a suggestion: why not pretend to be gay to avoid getting fired? We all know where this is going, but don’t worry, the clichéd idea is excecuted perfectly. And as an added bonus, Gérard Depardieu features as a love-struck co-worker.

Two customs officers – Ruben, a Belgian francophone and Mathias, his French archnemesis – are forced to work together against drug smugglers when all border control posts are shut down. And just to make things a little worse, Mathias is in love with and wants to marry Ruben’s sister. Fasten your seatbelts kids, it’s going to be a bumpy ride.

Which French movies make you laugh out loud?