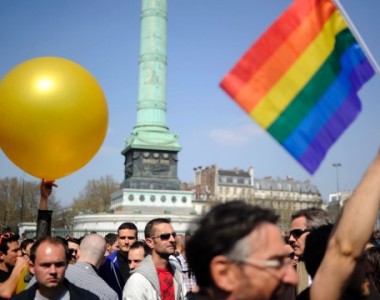 Image #: 22068145 epa03671557 Thousands of people protest during a rally in support of the French government’s plans to legalize gay marriage and adoption in Bastille square, Paris, France, 21 April 2013. Tens of thousands of people took to the streets of Paris to protest gay marriage, which is set to become law after a final legislative act in two days. ‘(President Francois) Hollande, we don’t want your law,’ shouted members of the crowd, which swelled to between 30,000 and 50,000, said organizers. EPA/YOAN VALAT /LANDOV