When one meets Susan Bromley, it is easy to imagine how her laughing blue eyes and her sense of humour might have seduced the Parisians, dissolving the cliché of the rough French local.

And only she could go to the Bourse in high multi-coloured socks, surprising a certain number of suits-and-ties.

Susan is now the co-owner of the Tara Guesthouse in Enmore, with her partner Julian. In Sydney, on this stormy spring morning, memories of her Parisian life are vivid. However, judging by the jacarandas, we are far from France. Read the story of an Australian in Paris in 1975.

On an August morning in 1973, 17-year-old Susan was stationed on the Sydney Harbour Bridge waiting for a certain French high-wire walker. He was taking a long time to show.

At that time, “to have somebody like Philippe [Petit] come and do what he did, it was just so far out from anything that anyone had ever even contemplated. That’s what made it so extraordinary.”

When she mentioned her desire to travel to visit Phillippe in France, he gave her his parents’ telephone number in Paris. A few days after her 19th birthday, Susan purchased a one-way ticket to Europe.

A dinner with a French celebrity

After Denmark, London and the Mediterranean, Susan went to France, carrying Philippe’s parents’ phone number with her.

“And then, maybe about three months later, he came back to Paris and he called and said, ‘Hi! Let’s catch up.’ We went up for dinner to La Coupole, and that was fantastic, because when we walked in, it was like being treated like royalty.”

La Coupole, the iconic brasserie-restaurant in the 14th arrondissement, was actually one of Philippe’s first supporters.

When he was poor, “one of the places that he used to set up to do his performances was directly across the road.” He would perform his show then the restaurant allowed him to go around the tables on his unicycle, armed with his battered top-hat.

On the rooftops of Paris 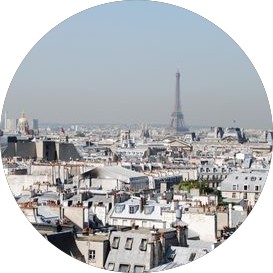 During her Parisian year, Susan lived on rue Ravignan, a stone’s throw away from Abbesses subway station. (Forget Google Maps. The only way not to get lost in Paris is to use subway stations as landmarks.)

The view from her chambre de bonne on the sixth floor overlooked the Eiffel Tower and Les Invalides. “I thought I was on top of the world,” Susan said.

“The first time I opened the windows, a chimney sweep walked by. And he lifted his hat, the way they do, and he said something in French, and of course, I don’t speak French. And he [opened his arms], and I knew he was talking about this fantastic view.”

He understood that she came from Australia, and after a small chat, the chimney sweep shook her hand and continued on his way across the Parisian rooftops. When she told her friend Daniel later on, he was amazed: “You are so lucky,” he told her.

“He said that often, with weddings, the bride’s father would organise for a chimney sweep to come and shake the hand of the bride and the groom, when they come out of the church. It’s because it is good luck.”

If you can’t buy a one-way ticket like Susan, don’t worry! Inject some French-ness into your everyday life and discover France in Sydney.

What are your favourite memories of Paris? Were you also once an ‘Australian in Paris’? Share your stories in the comments below!

Image credits:
1. Family portrait: Susan, Julian and Oscar, via taraguesthouse.com.au.
2. The magnificent Tara Guesthouse, in Enmore, via facebook.com.
3. Philippe Petit ran away with the circus with Barnum and Bailey, via vaudevisuals.com.
4. Paris’ rooftops, via avecmond60.canalblog.com.
5. The pretty girl and the chimney sweep, by Lucien Lorelle, via 20minutes.fr.