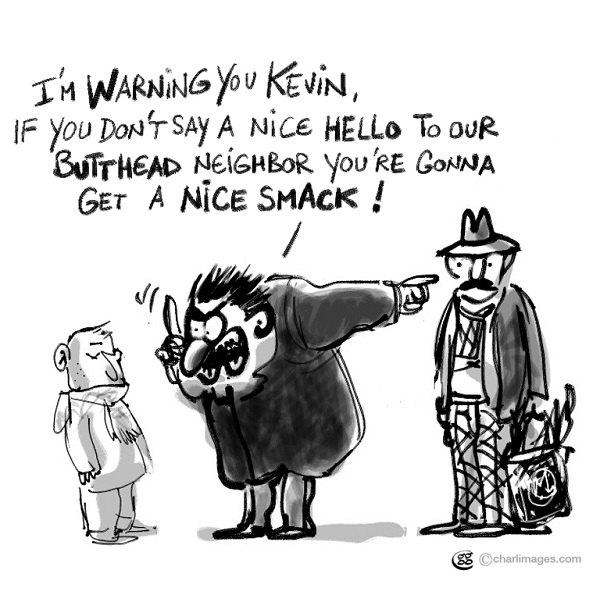 In which I examine the ins, the outs and the treacherous culs-de-sac of French politesse.

Until I moved to France I thought I was quite well-mannered. In fact, by the standards of my country of origin, the United States, I was. This is because in the States politeness can pretty much be boiled down to using the words ‘please’, ‘thank you,’ ‘you’re welcome’ and ‘excuse me’.

That covers the four most fundamental aspects of human interaction: wanting something, getting it, pretending that you enjoyed giving it, and audible biomethane emissions. Or inaudible, if you’re in especially ceremonious company.

Of course, French has its versions of all those expressions, but the equivalents (respectively s’il vous plaît, merci, je vous en prie and excusez-moi) are significantly longer, totaling 13 syllables compared with nine in English.

In other words, French people spend nearly 50% more time on any given day rattling off formules de politesse (which term itself has 50% more syllables than the English ‘polite phrases’). This leaves them with less time for everything else they need to do — which is why they’re so brusque and impolite to everyone.

And there’s more. In the US it’s not particularly shocking in commercial and other non-personal transactions to start talking with few or no preliminary niceties. If you’re ordering coffee, mailing a package or buying drugs, it’s OK to get right down to business without so much as a ‘hello’.

But, as all foreigners learn within minutes of setting foot on French soil, and sometimes French tarmac, it is considered a grievous insult here to start any conversation, no matter how utilitarian, with anything but bonjour. (Or bonsoir if it’s after sundown, but since most people have lost their voices by then from all the extra polite verbiage, this is a relatively rare circumstance.)

And, new arrivals take note, a simple bonjour is not enough — it is also considered a grievous insult not to tack on a Madame or Monsieur, as the case may be.

In stark contrast to the United States, it is not considered a grievous insult to presume that a woman is unmarried and call her Mademoiselle, although I personally see no reason to attempt this distinction.

“In other words, French people spend nearly 50% more time on any given day rattling off formules de politesse (which term itself has 50% more syllables than the English ‘polite phrases’).”

In any first-time meeting with a grownup who happens to have double X chromosomes, I figure I have two options:

There’s no contest. Even if I think I might enjoy option number one. (Note to grownups who happen to have double X chromosomes and be married to me: I mean because some women have really nice-looking fingers!)

In any case, failure to follow the greetings rule is asking for trouble. If you just walk up to a French person and start asking questions — “Which way to the Louvre?” “Why do you smell good?” “Where’s the fire extinguisher?” — the mildest reaction you can expect is an icy stare and a sternly inquisitive, “Ah, Bon-jooouuurrrr?” Which is French for “Were you raised by wild boars?”
Should you ever find yourself in this situation, take my advice: don’t just grunt in reply.

They’re only not following orders

And there’s still more. Unless they happen to be working in a restaurant or infantry battalion, the French don’t take orders. By which I mean: phrases that sound banal or even downright friendly in English can sound like aggressive, imperious demands in French.

For example, in English “Call me” is understood to mean “I would be delighted to receive a phone call from you at your convenience,” but in French “Call me” (“Appelez-moi”) is understood to mean “CALL ME!!!” As in, “I hereby command you to contact me by telephone at my convenience, so that I can continue to boss you around as the whim strikes me and then order you to beg for more while you’re struggling to wriggle out from under my boot heel so that you can finish tongue-cleansing my bathroom floor before I get angry.”

“And, new arrivals take note, a simple bonjour is not enough — it is also considered a grievous insult not to tack on a Madame or Monsieur, as the case may be.”

Therefore, everything that you would like someone else to do has to be expressed as a vague, sheepish, Uriah-Heepish suggestion. If you really want a French person to call you, whether for a job interview, dinner date or cocaine delivery, instead of “Appelez-moi” you need to dampen the blow, so to speak, by saying something like “Vous pourriez m’appeler” — “You could possibly call me.”

For those of you who are taking notes, here are some other common English imperative phrases adapted to make them directly translatable into polite French:

I would appreciate it if you would give me five.

On your marks… Get set… You may now proceed!

I heartily recommend running for your life!

Imagine how much fun it would be to halt before I shoot!

Pray thee consider the potential benefits of sticking it up…

Oh, that’s enough note-taking. But keep your pens handy because, of course, there’s more: with French politesse you also have to get it right in writing. As I will explain in lesson two…

Do you also find the French language more formal or, at worse, stilted than English? Answer me! I mean, any comments would be most welcome.