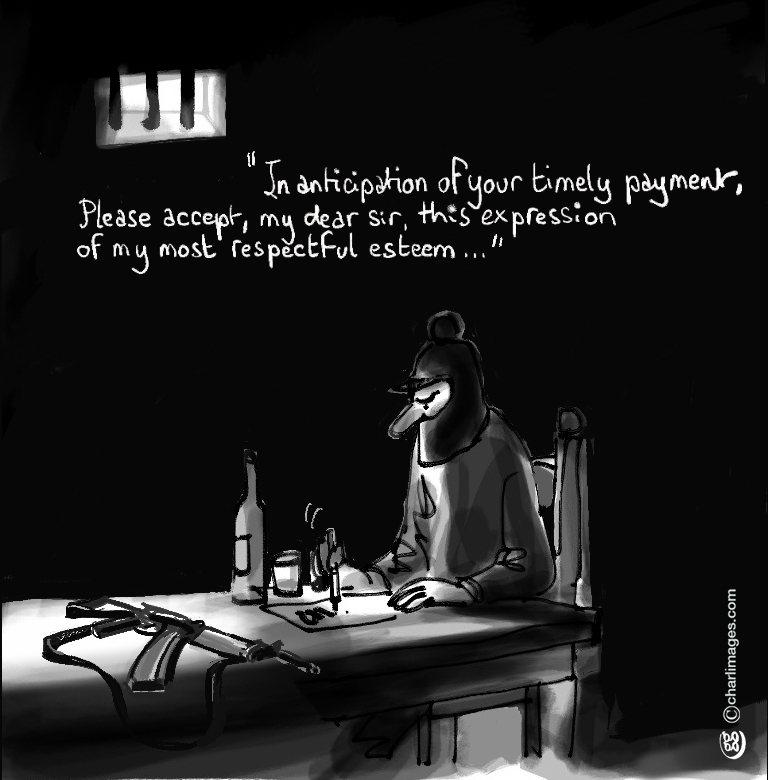 In which I explain how the French are among the best-mannered people on Earth. At least on paper.

In my previous article, I discussed the spoken rituals of French politesse. Or rather I discussed some of them, shamelessly and capriciously cherry-picking only the specific aspects of the subject that suited my biased, self-serving purpose of ridiculing a language and culture that I actually admire.

That was so much fun I decided to do it again, only this time with the written rituals.

Consider the thank-you note. Now stop considering it, because it doesn’t suit my biased, self-serving purpose. Let’s talk about the business letter instead.

From time to time, we all need to communicate in writing with Russian dating agencies, Canadian pharmacies, Nigerian banks, etc. For these letters, the opener in English is always the same: ‘Dear Sirs’.

In French, for once, the formula is simpler: you just say ‘Sirs’ (‘Messieurs’).  The qualification ‘Dear’ (‘Cher’) is not merely an honorific — it’s only used for people whom you literally hold dear. Or would like to, if you’re a stalker.

“‘I beseech you to acknowledge, Sir or Madam, the expression of my most distinguished sentiments.’ You have to stretch for half an hour and strap on a helmet and a hard cup before writing a sentence like that.”

So you get a break there, but they more than make up for it at the end of the letter. In English (or at least in the American variety) (or as some would say, the American travesty) we sign off on any formal correspondence, from requests for papal audiences to ransom notes, with a simple ‘Sincerely’ or perhaps, if we’ve just polished off a sixer of Coors and are feeling really effusive, ‘Sincerely yours’.

But the basic equivalent in French is (get this): ’Je vous prie d’agréer, Monsieur/Madame, l’expression de mes sentiments les plus distingués.’

Yes: ‘I beseech you to acknowledge, Sir or Madam, the expression of my most distinguished sentiments.’ You have to stretch for half an hour and strap on a helmet and a hard cup before writing a sentence like that.

And, as those of you who read part one of this series are already suspecting, there’s more. Get THIS: each and every use of that phrase has to be adapted to the specific situation – the words that come after mes must be chosen with care.

One source I consulted on the web lists precise variants of this phrase for no fewer than 52 different possible recipients, including some interesting juxtapositions:

“It’s a safe bet that beseeching sirs and madams to accept acknowledgements of distinguished and/or respectful whateverthehell will soon be a quaint relic of a bygone era, like the top hat, the monocle, MySpace and unprotected casual sex.”

In case anyone actually wants to address an audience request (or ransom note) to the pope, it’s ‘my immense and deep devotion’, but just ‘my deep devotion’ for a regular priest. Apparently devotion comes in two dimensions.

All those ins and outs are on the way out

Of course, in today’s Internet-dominated world, hardly anyone takes the time, trouble and bandwidth to tap all of that out in an SMS message. The most common business sign-off in French e-mail is now ‘Cordialement’ or, for those who just polished off a trois-apéritif déjeuner and are feeling really effusive, ‘Bien cordialement’.

It’s a safe bet that beseeching sirs and madams to accept acknowledgements of distinguished and/or respectful whateverthehell will soon be a quaint relic of a bygone era, like the top hat, the monocle, MySpace and unprotected casual sex.

“From time to time, we all need to communicate in writing with Russian dating agencies, Canadian pharmacies, Nigerian banks, etc.”

Personally I have only ever used the expression once in an e-mail, and that was to express the diametric opposite of my most cordial salutations. This was in a message to a former client who, to put it respectfully and distinguishedly, had unsentimentally screwed me out of an amount of money big enough to hurt but not big enough to sue.

To express my immense and deep contempt, in what I sincerely hoped would be my last communication ever with the dickweed, I closed my missive with the whole unabridged long-form formal formula.

Here again, the English equivalent would have been much shorter. In fact, just two words, both under five letters, would have done quite nicely. But would not have been very polite.

Stop me if I’ve already asked you this: do you also find the French language more formal or, at worse, stilted than English? Or is it just me? Respectful, distinguished answers only, s’il vous plaît Mesdames, Messieurs et Mesdemoiselles.

September 24, 2020, 03:28 am
Sara Kermani on Going to school in the US and in France, a different experience
"I remember the French (early 1980s) elementary school cafeteria experience was like a true high..." Read more September 21, 2020, 03:57 pm
Steven Toh on Taking holy waters at Lourdes: faith or fiction?
"Lourdes is an interesting book from Emile Zola, knowing his reputation as the founder of..." Read more