Finding love in France – not just a cliché 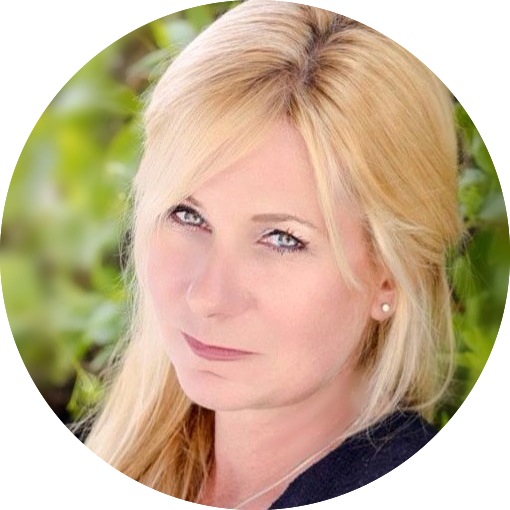 What makes a true love story?

Samantha Vérant has just that. In her book and in this interview, she was lovely enough to tell us the story behind the cliché: proving how life often works in unexpected ways and (another cliché) love can be just around the corner.

Have you always been a Francophile? What was it that first led to your interest in France?

My love for all things French began in high school, where it was required to take a secondary language course. Between Latin, Spanish, French, or German, my choice was a no brainer. I’d been studying voice at the time and the favourite arias I sang were in French – the language devastatingly beautiful to my ears.

Although music may have awakened the Francophile in me, like most teenaged girls, I also dreamt about visiting Paris. The art! The fashion! The culture! The music! The history! Well, there’s all that…and the sexy Frenchmen I’d envisioned with their sexy French accents. Ooh-la-la (la-la).

The story of ‘Seven Letters from Paris’ is so romantic, it’s almost hard to believe it’s real. But with French love stories being such a cliché (as you mentioned in your guest post for MyFrenchLife.org), how did you avoid stereotypes and clichés in your work, and writing?

Aside from the fact I met Jean-Luc at a café, my crazy love adventure is far  from being a cliché. 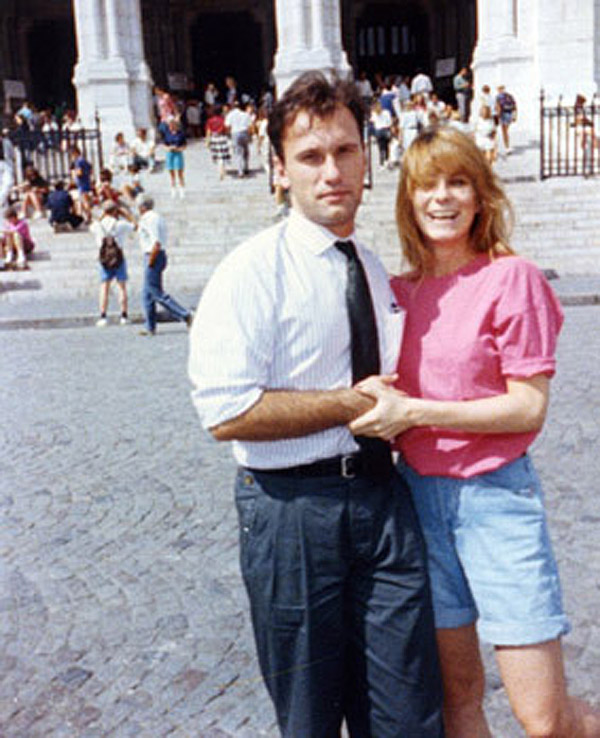 In 1989, I spent twenty-four hours with Jean-Luc in Paris, leaving him on a train platform at Gare de Lyon to get back to American university life.

In an attempt to keep the spark between us lit, Jean-Luc wrote me seven heartfelt love letters. But I never wrote him back until twenty-years later, in 2009, during a time when everything in my world had crumbled and I was questioning everything.

What started out as a very delayed apology to Jean-Luc, explaining my two-decade long silence, turned into something more. Our communication went into overdrive and Jean-Luc and I ended up falling in love all over again- via email.

He flew me to France and le coup de foudre struck again. After navigating a sea of French blue, white, and red tape, on a sunny day in May of 2010, exactly one year after I had turned to the Internet to find him, Jean-Luc and I tied the knot. 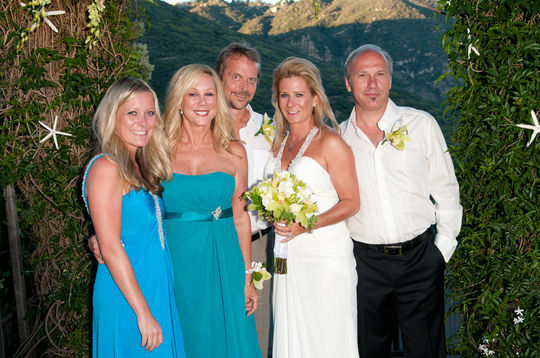 Also, ‘Seven Letters from Paris’ is more than just a romance about rekindling a romance with the sexy French rocket scientist who got away. It’s about loving the people who mattered the most in my life, like the mom who raised me on her own until I was five, and the dad who adopted me, counting me as one of his own.

It’s a story about parenthood, about loving two step-kids who lost their mother to cancer, and about the dad who was looking for somebody who would love them as much as he does. Of course, ultimately, ‘Seven Letters from Paris’ is about how I faced my deepest regrets and fears head on, and how, when I finally opened my heart to it, I discovered love. And with love on my side I realized I could do anything. 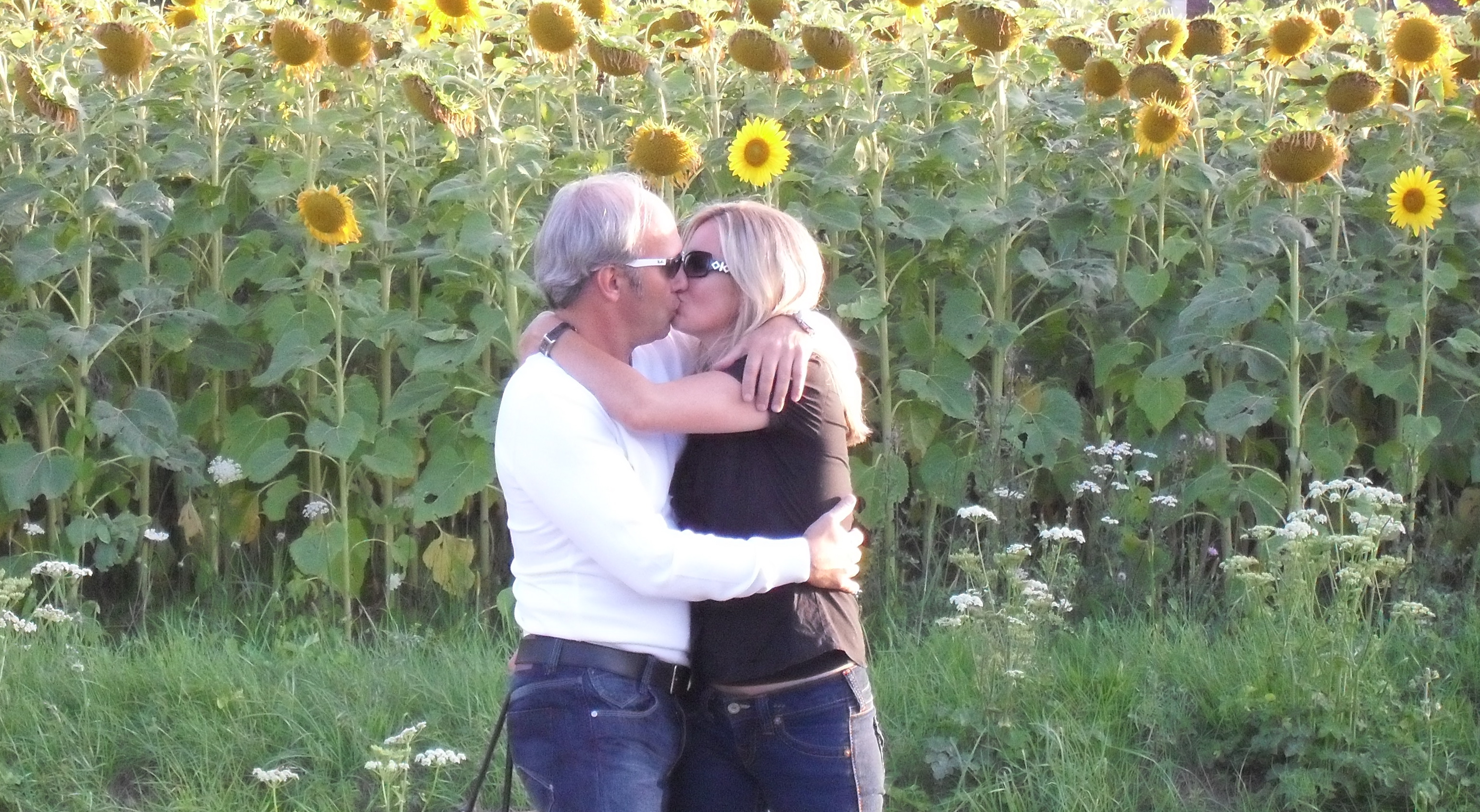 So, yeah, clichés and stereotypes were easily avoidable.

I really can’t stand it when people say the French are rude, especially Parisians. Paris doesn’t represent the spirit of France, only a very tiny potion of it, a blip. Just like any other big city – London, New York, Milan, Sydney, Los Angeles, San Francisco, or Chicago, to name a few, if you’re looking for stereotypes or clichés; you’ll find them.

I live in southwestern France, about fifteen kilometers south of Toulouse, and the people I’ve met have been warm, open, honest, caring, accepting, and never judgmental. I’ve been welcomed into this new life with air kisses – sometimes two, three, or four, depending on where I am – and open arms. Vive la France!

What was the most challenging part of writing this story? 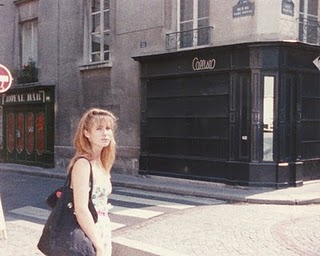 The biggest challenge was killing my darlings – scenes I thought were funny or charming, but simply weren’t. It was hard to have objectivity, especially when I was writing about my own life. This was why an editor was so very crucial to the process.

Before I sold my memoir, I hired a well-known freelance editor to bring down the editing hammer. Thankfully, he didn’t smash my story to bits, but noted where it needed to improve.

And the most rewarding?

My road to publication was tough. Instead of a yellow brick road, my path was paved with barbed wire and many falls. It took me three years of writing, revising, and editing until I had a saleable manuscript on my hands. Thankfully, all the hard work and perseverance paid off!

“It was hard to have objectivity, especially when I was writing about my own life.”

The day Sourcebooks (my US publisher) emailed me, alerting me to the fact they wanted to publish my book, was a real HALLELUJAH moment! I must have danced around my house for weeks.

The dance continued when I found out Random House Australia had acquired the Aussie/New Zealand rights for ‘Seven Letters from Paris,’ and that they would be including it in a new marketing initiative called the ‘Random 10’– ten books they’ll be paying special attention to in 2014.

I hope to be dancing again once ‘Seven Letters’ hits the shelves this fall– October in the US, and November in Australia/New Zealand. I’m dying to hold actual copies of both editions! For now, most major booksellers have listed my memoir on their sites and it’s also on GoodReads.

Tell us about your writing process. Do you have habits, or a routine? How do you find inspiration?

My writing process is a bit odd, mostly because I can’t continue on with a story until the first chapter is close to perfect. This can take weeks.

Once I’m happy with the first chapter, the words flow, and I sit my butt in a chair and write. If I hit a wall, or become frustrated, I’ll take a long walk until inspiration hits. Coffee and dark chocolate aid my writing process. A glass (or two) of red wine soothes my spirit after tapping on the keys all day.

When the first draft is finished, I print it out and go through it a few times, deleting things here, adding things there, fixing typos, etc. Then it’s sent off to my alpha readers– at least two critique partners.

Once suggestions are sent back to me, I edit, based on my readers’ comments. The manuscript then goes to beta readers (at least two new pairs of eyes)…and the editing process begins again. It’s time to pop open the bubbly when I can finally write two words: the end! Really, it takes a lot of dedication (and an iron spine) to write a book.

What is it like being part of a French family? What was the biggest challenge in adapting to la vie française?

Being part of a French family is like being a part of any family, but with loads of language mishaps. I think the biggest challenge was everything hit at once.

“He flew me to France and le coup de foudre struck again.”

I jumped into ma vie française, but forgot to pack a parachute. A new country? A language I hadn’t spoken in over twenty years? A new man? Instant motherhood? In addition to my newfound immigrant status and the French paper trail, it was all quite overwhelming. I had to integrate quickly…or die.

And what is it like being a step-mother to two French kids, as an American? It must be difficult sometimes!

I’ve been really lucky with the kids- Elvire, now sixteen, and Max, fourteen. They had such an estranged relationship with Jean-Luc’s ex-wife (not their mother, who is deceased), so I, the goofy American with a now open heart, was a welcomed and much needed change. We clicked into a Franco-American family unit right away.

I help the kids with their English; they laugh at my French. We joke around, have fun, and family outings are always a blast. The only big issues arise at the dinner table. Put it this way: I’ll never cook tuna noodle casserole again. But you live and you learn. And I’ve had four years of constant education.

Maybe I still don’t have all those dreaded conjugations down, but I’m a master with French familial cuisine— moules frites, my specialty. 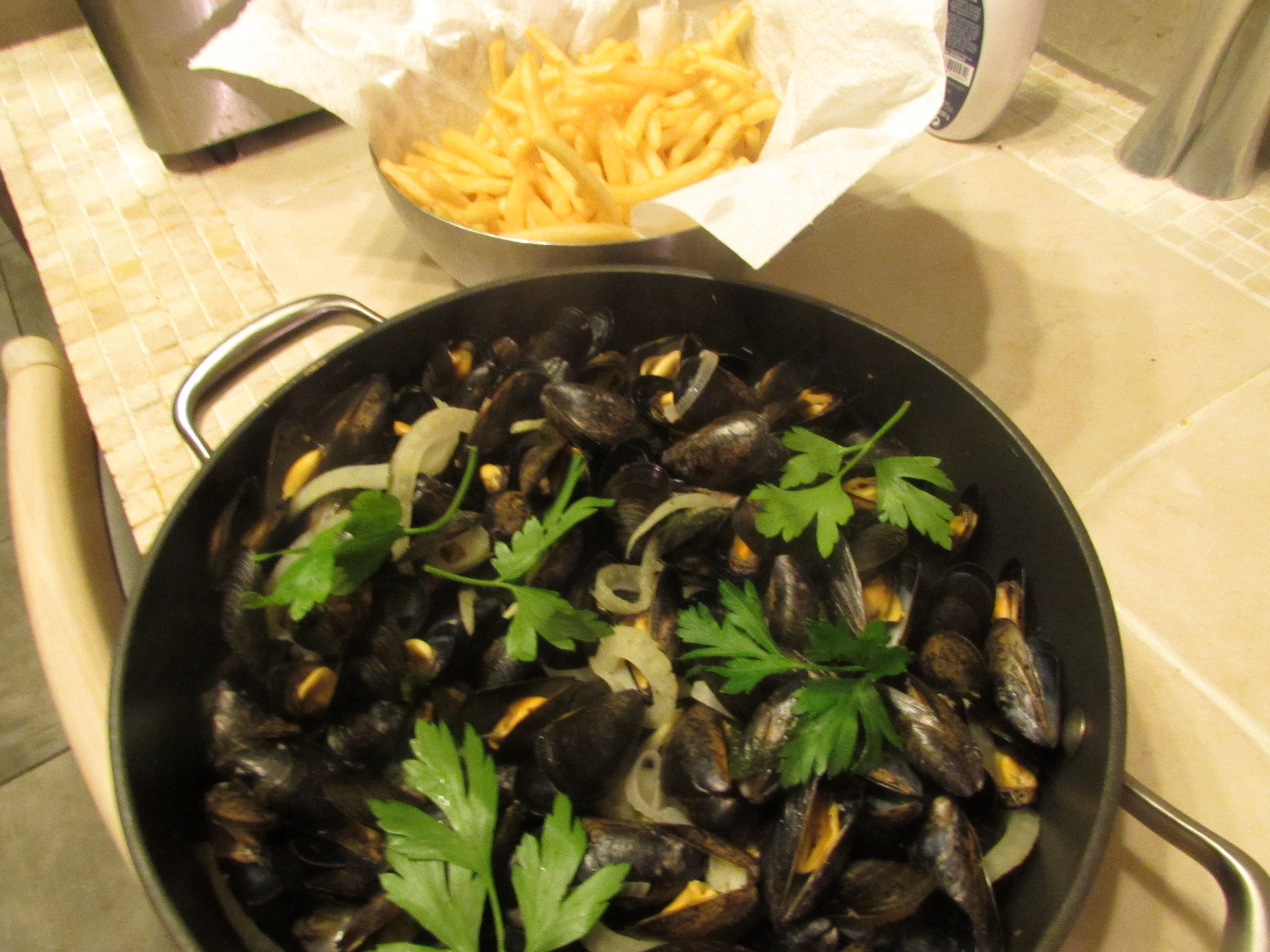 If you don’t mind us asking, how are love and relationships different with a French partner?

You know the stereotype of how French men are the most romantic and passionate lovers in the world? In my case, this is absolutely one-hundred-percent true, and a cliché I want to live with for the rest of my life.

Jean-Luc doesn’t write me love letters anymore, but, in our soon-to-be fourth year of marriage, he’s made me feel beautiful and special every single day. We don’t fight; we communicate.

Plus, Jean-Luc vacuums and mops and cooks up a mean flambéed lobster in a cognac sauce. Is he different than other French men? Other men? I don’t know. What I do know is how I feel; I’ve hit the love jackpot.

How has making the big move to France changed your perspective; on life, writing and everything in between?

As mentioned, moving to a foreign country was a daunting experience, to say the least. But, no matter how hard or scary or intimidating things appeared to be at first, giving up on this new life was never an option. If I didn’t face my fears, I’d live out a life filled with regret, curled up and crying in bed. Maybe I’d even lose Jean-Luc? Been there, done that once before.

It was time to change everything, to be brave, and go with the flow. Now, I’m all: “Strap my ankles to a bungee cord. I’m ready to jump!”

I’ve applied this outlook to life, to writing…and everything else in between.

I celebrate every accomplishment, great and small. I’ve learned not to let the little problems in life weigh me down. There is a solution to everything. I know how to improvise when things aren’t going as planned. I’ve also learned to laugh at myself, which is what happens when you make as many French faux pas as I do!

‘Seven Letters from Paris‘ will be published by Sourcebooks in October 2014, and by Random House in Australia. Here’s a little sneak peek:

Dame Tartine, the café where I met Jean-Luc in 1989

La Maison cocktail bar in the centre of town 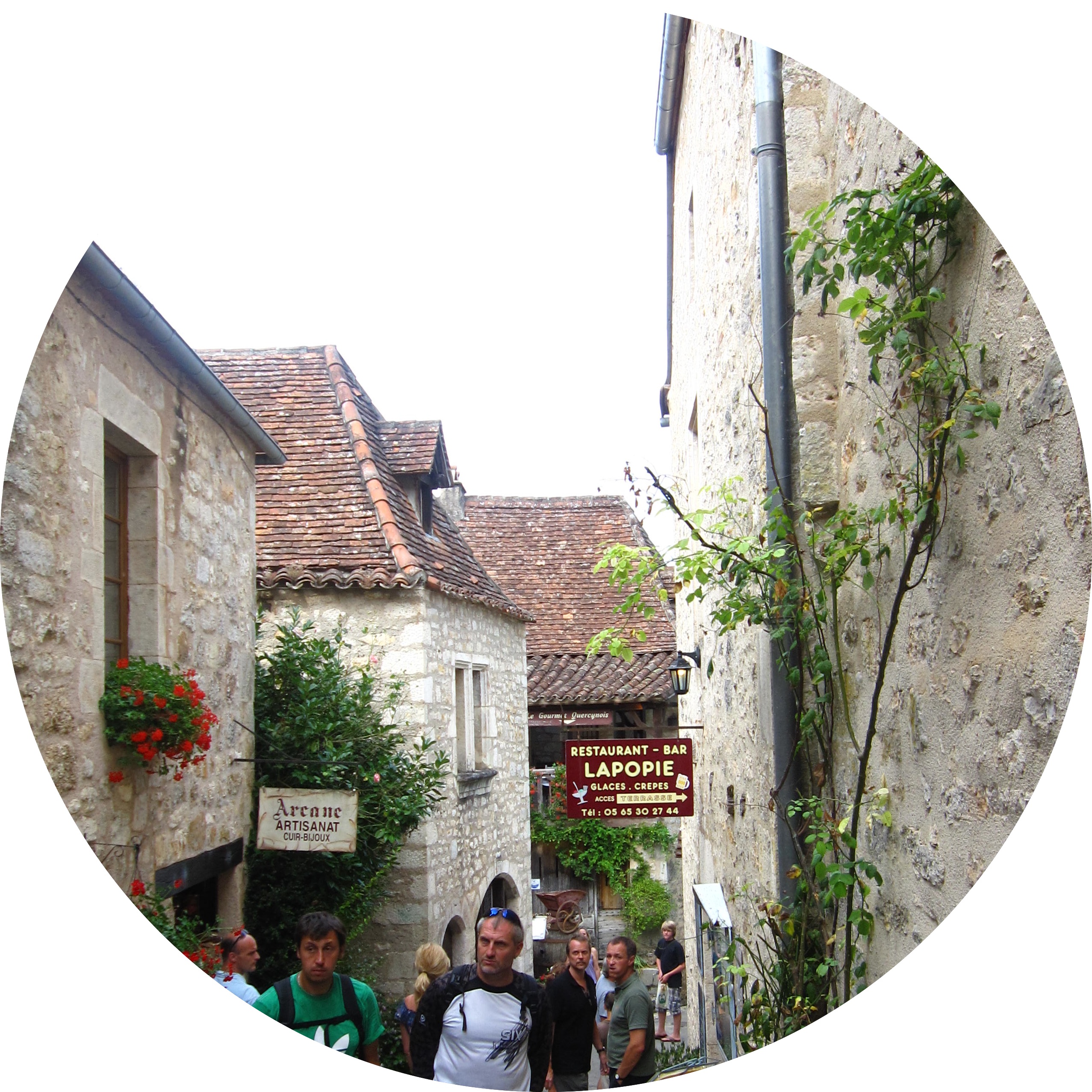 Skiing in the Pyrénées: Peyragudes

Saint-Cirq-Lapopie, celebrated as one of the most beautiful villages in France!

Thank you, Samantha, for sharing a story so personal (in your novel and with us!)

Have you been inspired by Samantha’s story? Have you found love in France? Share your experience in the comments below.