After travelling around the globe, the first international exhibition solely dedicated to the French fashion legend Jean-Paul Gaultier is making a stopover in the designer’s favourite city.

And where else would the eccentric couturier feel most at home other than London, the home of unconventional and rule-breaking fashion?

We’ve looked at the American tribute ‘The Fashion World of Jean-Paul Gaultier, from the Sidewalk to the Catwalk’ in New York as well as the beginnings of the French creator. It’s now time to look at the British influence on this much loved haute couture designer.

He may have been born in the suburbs of Paris, but Jean-Paul Gaultier’s heart beats to the rhythm of rock ‘n’ roll London. From his first visit to the city in the 1970s, the designer fell in love with British style, spirit and peculiar characters. Gaultier was inspired by the lack of rules, the style adopted by the punks of Trafalgar Square and the seamless mixing of subcultures: dandies and rockers.

Gaultier found inspiration and new material in the vibrant energy of London’s streets, Vivienne Westwood and Malcolm McLaren’s SEX boutique and the glam rock movement headed by David Bowie and his alter ego Ziggy Stardust. Often crossing the Channel at weekends to spend time at the flea markets and underground clubs of Camden Town and Portobello, he was soon influenced by punk’s anti-materialist principles.

Mixing punk influences with Gallic ones, Gaultier began to explore a more non-conformist fashion. As a couturier with a punk soul, poverty forced Gaultier to be inventive, adopting concepts of recycling and the offbeat.

An Englishman at heart?

At the opening of his exhibition in London at the Barbican Art Gallery, Jean-Paul Gaultier paid tribute to London and the British ‘cult of difference’.

“Britain represents iconoclastic creativity, individuality – things that we don’t know so much in France.”

The designer has often said that the Brits were the first to take interest in his work and that in many ways he feels more at home in London than in Paris.

“There is a particular humour in Britain that you don’t find elsewhere, and one can see that in the way you dress. You’re so good at making fun of yourself here, whereas in France people feel that they always have to be serious, tasteful, and adhere to ‘the code’.” 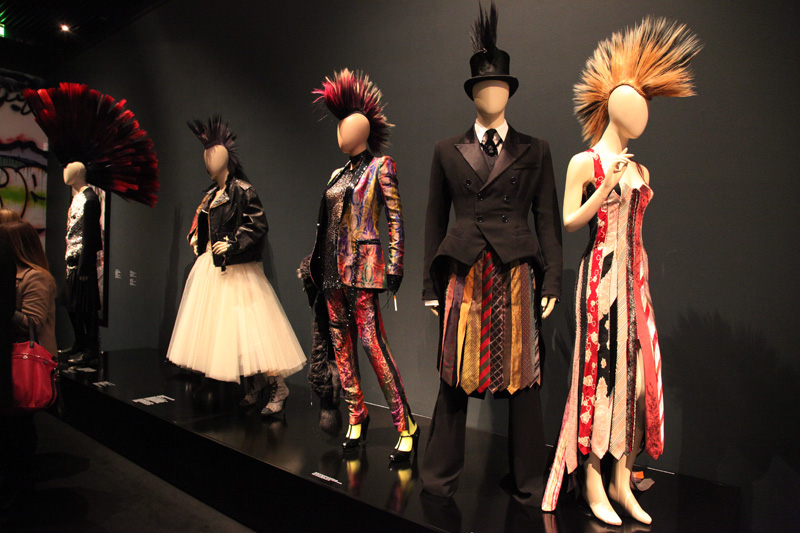 The rosbif in French haute couture

London’s influence on the designer is highlighted by the silhouettes of punks sporting huge Mohawks, tartan and studded leather biker jackets. Today these are as covetable as a designer handbag.

Alongside the conical-bra basque worn by Madonna on her Blonde Ambition tour, Breton stripes, less Gallic touches of tartan, bondage and leather with roots in British dress are also emblems of the Jean-Paul Gaultier brand. 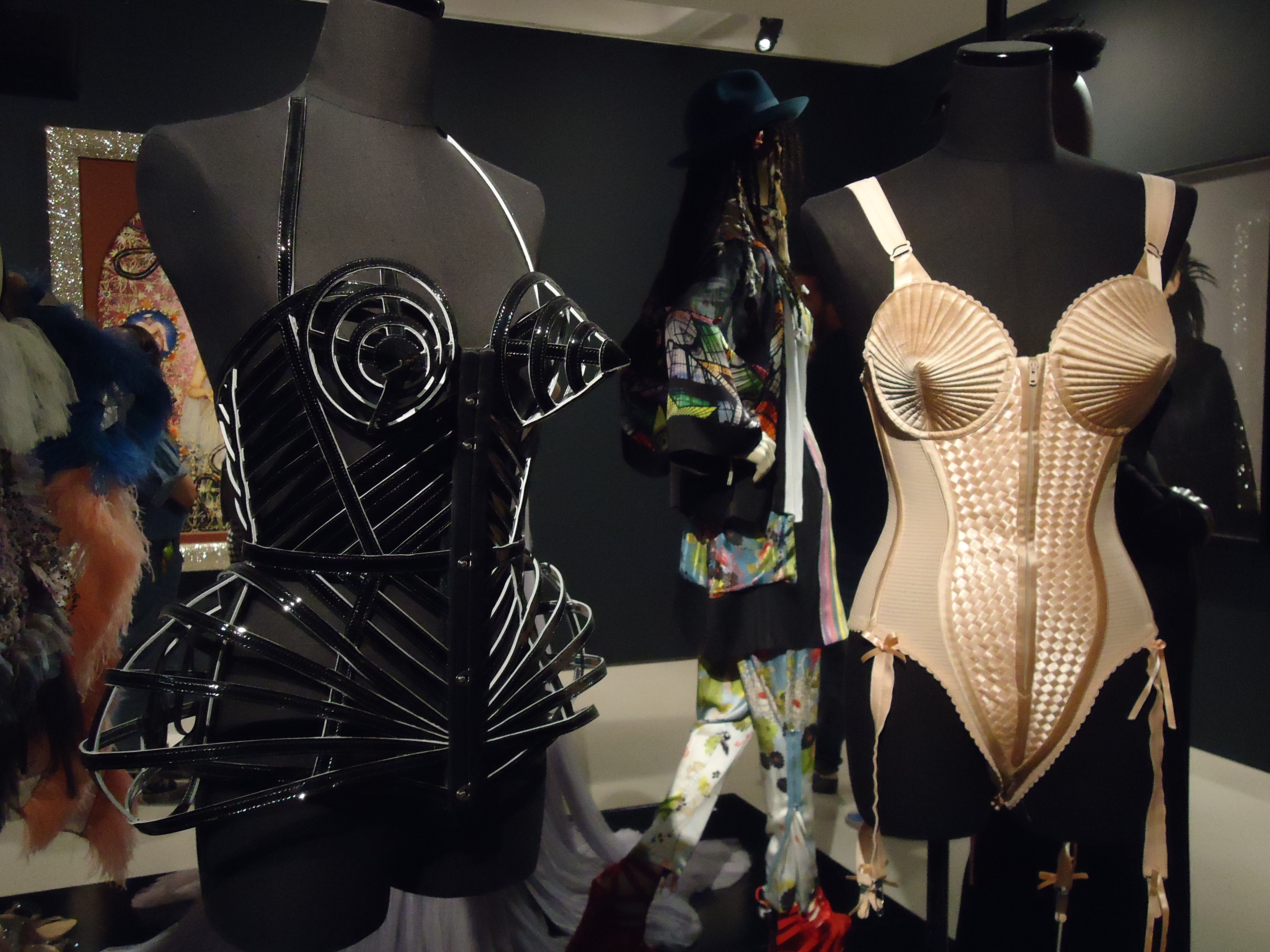 One room is devoted to Eurotrash, the outlandish adult television show hosted by Gaultier and Antoine de Caunes on Britain’s Channel 4 during the 1990s.

My favourite themed room at the exhibition was the ‘Punk Cancan’, showcasing Gaultier’s trademark mix of Parisienne couture with British insubordination.

A life-size mannequin of Gaultier himself sports his memorable Scottish kilt alongside his sailor stripes and talks in his comical ‘Allo Allo’ accent.

It is a riot of sound, movement and colour and a true display of Jean-Paul Gaultier’s creativity, theatricality and originality – make sure you catch it!

The exhibition, at Barbican Art Gallery in London, started April 9 and ends August 17 2014.

Have you visited this exhibition? What did you think? Share any comments with us below – we love to hear your thoughts and opinions!