Meet the Green Fairy in Sydney at the Absinthe Salon 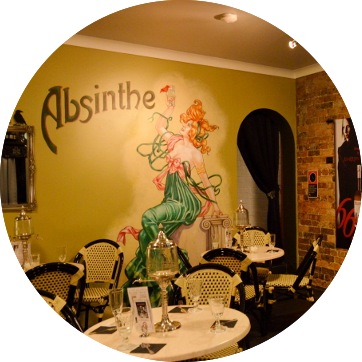 Spending the Thursday evening at the Absinthe Salon, the only bar in Australia exclusively dedicated to absinthe, I decided to try what my friend Gemma had chosen: the ‘Libertine Originale’. My first reaction: “I feel like I’m eating couscous.”

Since I had played it safe at first with the uncomplicated ‘François Guy’, the spicy notes of the ‘Libertine Originale’ took me by surprise. Yet, the green fairy wasn’t the cause of my absurd couscous comparison; like everyone else, I didn’t know much about absinthe. The Absinthe Salon and its Swiss-French absinthes with couscous and flower aromas, however, would teach me better.

A road-trip to the French distilleries

The Absinthe Salon, found in the heart of Surry Hills, results from a passion for absinthe cultivated with an expert hand by Gaye Valttila and her partner Joop van Heusden.

For Gaye, this passion, not only for the spirit in itself but also for “its wealth of history”, finds its origin in cinema. “In ‘Dracula‘, there is a very beautiful absinthe scene, with the proper antiques, the proper method.”¹

The adventure began in 2001. While working in advertising in Holland, Gaye and Joop heard about the lift of the ban for absinthe-making in France. “We just put the dogs in the car and went to France and Switzerland on an absinthe distillery crawl.” Their first stop was the Lemercier distillery in Fougerolles, Franche-Comté.

In Sydney in 2005, Gaye and Joop brought with them a bottle of Lemercier 45 and another of Lemercier 75. They started by distributing the Lemercier absinthes, adding new brands to their portfolio, little by little.

In 2009, thanks to the new Small Bars Bill facilitating the development of small bars in New South Wales, they opened the Absinthe Salon. Now offering 32 different absinthes, Gaye believes they “were at the right place at the right time”.

Back again on a Wednesday, I chose the ‘Reverie’ from the Distillery Botanica  – the only Australian absinthe on the menu and one of Gaye’s favourites. “It beats some of the French ones,” she confided.

While the water dripped, the fragrance of the absinthe slowly released and filled the room with notes of fennel and green anise. The liqueur became clouded and freed the green fairy. This opalescence effect, called the louche, is the result of the absinthe preparation ritual, many times depicted in pop culture with reasonable exactitude.

The correct preparation takes place as follows: a sugar cube is placed on a slotted spoon on top of the glass filled with a measure of absinthe. Ice-cold water is then poured very slowly over the sugar, without any pyrotechnical effect – the flaming sugar cube is 100% marketing and a heresy witnessed for the first time in the late 90s in a bar in Prague. Surprisingly, the sugar is  not compulsory; it is just a matter of taste.

The vocation of the Absinthe Salon

Fascinated by the enigmatic and misunderstood side of absinthe, whose reputation has been distorted by decades of prohibition and urban legends, Gaye got into this adventure with Joop for this exact reason: educating and encouraging people, teaching them how to appreciate this apéritif and spreading it through Australia.

Absinthe tasting “becomes a social experience and about the ritual. There’s no sculling and no rush because it takes time.”²

Gaye wishes for people to get together and open their own bars, but they seem to be afraid of the commitment it requires. “We need to find crazy people like us.”

Et vous – where is your favourite spot for a glass of absinthe? Join the conversation in the comments below!