A few months ago, I introduced you to the French painter Pierre Soulages, the undisputed master of ‘Les Outrenoir(s)’ – a phenomenon drawing upon light and reflections to see beyond the shade of black. But today, I’m introducing you to a French artist whose work is rich in colour.

Known for his vibrant abstract artwork and his outspokenness, Bernard Cadène – more commonly referred to as the “painter of the colours” – is an artist to follow.

Cadène – a visionary first and foremost

At first, his parents wanted him to be an accountant. But that was before they discovered the incurable fever infecting their young Bernard: the art of creation.

After earning first place in a drawing contest at 13, followed by a stint at studying at a fine arts school in Toulouse, he then spent some time as an art teacher. Unfortunately, at the time, painting didn’t provide him with enough income to support his family.

So he turned towards advertising, a field in which he excelled and which led him to create his own audiovisual production company. Despite enjoying success there, Bernard would crave his brushes and canvasses. It was in 1987 that the painter made a comeback and, with the organisational help of a gallery owner in Albi, they coined it the ‘comeback exhibition’.

It was then that Cadène understood that painting was his breath of life. Several years later, he stated, “I cannot imagine ever giving up drawing or painting. I would like to die painting.”

In love with life, the colourist is bold with his brushes, playing around with them like an orchestral conductor offering us work synonymous with joy.

Colour as a signature

Whether it be with warm colours or cold, Cadène loves to take risks, mixing tones that ordinarily wouldn’t go together. Far from being a painter who follows trends, he is free and loud and proud of it. A talented all-rounder, he sees each canvas as a new adventure.

Still life, scenery, portraits – the artist leaves his talent at the whim of his feelings of the moment, digging at times into his sketch box for sketches done at different periods of his life.

Nonetheless, Cadène isn’t always in his studio. A passionate artist, he is also involved in various art projects.

Cadène, a curious and ‘all-terrain’ artist

Far from being a traditional artist, Bernard Cadène is what I would call un peintre tout terrain.

Despite 100 solo exhibitions under his belt, he has taken time to participate in public events such as the ‘Cow Parade’, collaborated with his friend and French chef Michel Sarran on illustrating the book ‘Toques et Toiles’, and created posters for the ‘Jazz en Comminges’ festival. Above all, Bernard Cadène enjoys experiencing new human and artistic adventures, which is what is so loved about him. 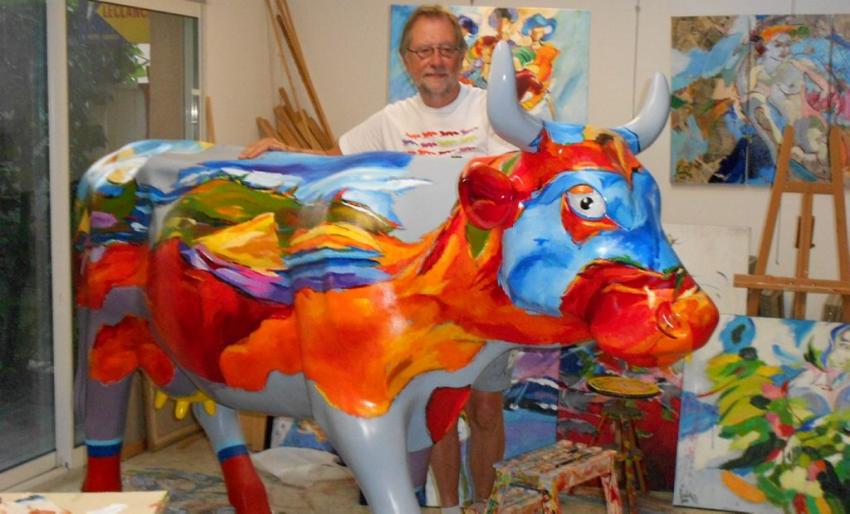 Never one to follow trends, the artist charms with the dynamism of his colourful, inevitably heart-warming canvasses. Frank and direct, he uses only his heart to guide him in enlivening his works and choosing his artistic collaborations.

A generous artist, what Bernard Cadène aims for is to spark reactions. As he so eloquently puts it, “it does not matter if people criticise or love what I do. A work that does not make the audience think is worth no interest.”

What are your thoughts on the “painter of the colours”? Let us know by leaving a comment in the box below!