My French Melbourne: escape to France with La Mauvaise Réputation 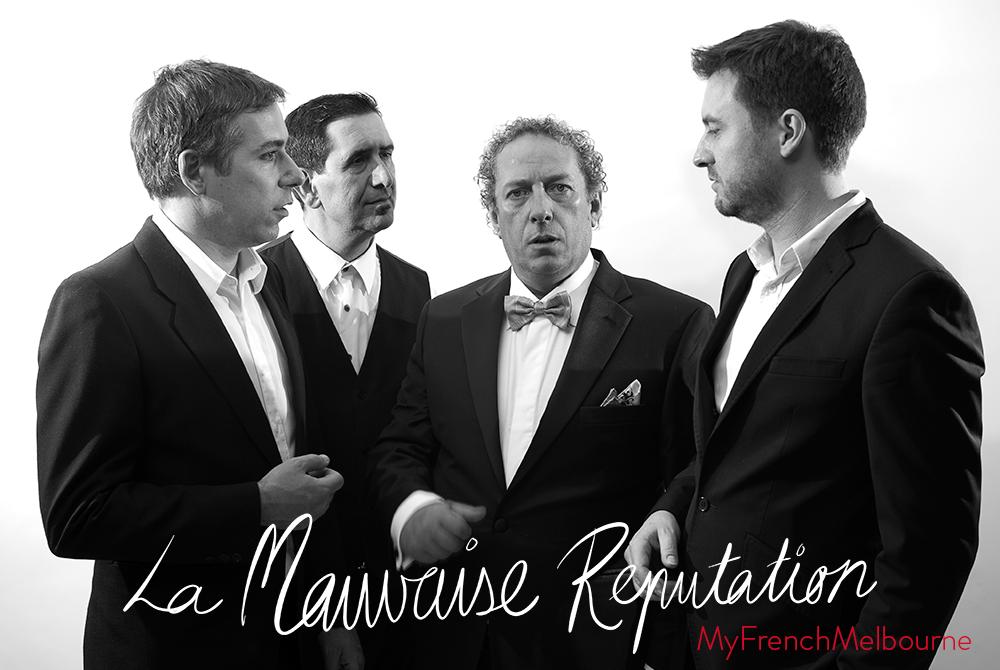 Imagine yourself sipping on a glass of French champagne, drooling over a deliciously French meal – all too easy to track down in Melbourne, you say? Well then, how about upping the ante and adding a French soundtrack to match?

Here at MyFrenchLife™, we’ve discovered a hidden musical gem for Francophiles – and you don’t even have to visit Paris to get a taste! Enter La Mauvaise Réputation, a Melbourne-based gypsy jazz and chanson française quartet.

So, why did four Melbourne musicians decide to give this genre of musique their undivided attention? We had the absolute pleasure of chatting to lead singer and rhythm guitarist, Paul Gillett, who enlightened us on all things French gypsy jazz…

Tell us the story of how La Mauvaise Réputation began. What inspired you to create the ensemble?

It was all Jon [Delaney, solo guitar]’s idea. He discovered this genre of jazz manouche that came out of Django Reinhardt, Stefan Grapelli and the Quintet of the Hot Club of France. He started jamming with Enzo [Ruberto, bass] and learning the repertoire. Enzo contacted me and asked if I was interested in playing rhythm guitar.

“The music is certainly novel for many listeners, but it’s also very accessible. Gypsy music has an energy to it that is easy to get swept up in!”

Then, after a few years, Jon had the idea of getting me to learn some songs to sing in French: discovering early recordings of vocal performances from the 1930s Parisian jazz scene, and then moving towards some of the more famous examples of chanson, such as Piaf, Gainsbourg and Trenet. That was really the start of the band as it is today, but the band was only completed as a quartet when Enzo’s long-standing friend Salvatore [Greco] joined us on accordion. That was a very big addition to the sound of the band; having an extra soloist and a bigger sound was great. And the accordion – it’s just so French!

What is it about French gypsy jazz that brought the four of you together?

It’s literally the most fun music any of us have ever played. It never gets old or boring! The glue that binds the whole thing together and, to a large extent, that defines the sound, is the distinctive rhythm: la pompe. It’s a percussive, energetic and technically challenging strumming style that gives the music a bounce [and] the upbeat dance tunes their infectious appeal, but also maintains a lively pulse through even the slow ballads.

Why play French gypsy jazz in Melbourne? How popular is your style of music here?

Melbourne is one of the best cities in the world to play live music, no matter what style you play. There are so many venues, and lots of people willing to come out and support the musicians. It also has a big Francophile community, and many lovers of gypsy culture.

We have always had a great response from crowds, whether it’s playing acoustically in a little café, or performing at large festivals.

“The chanson tradition is a more classically French musical style and has a canon of song that is almost unrivalled in terms of lyrical sophistication and complexity.”

Has your style of music had to adapt to the Melbourne lifestyle?

No. We have always been concerned to recreate as authentically as possible the original sounds of Django’s ensemble work, and to be very faithful to the tradition of chanson. But we’ve never felt that there was any pressure to do anything other than what we’ve been doing. The music is certainly novel for many listeners, but it’s also very accessible. Gypsy music has an energy to it that is easy to get swept up in!

The other thing to consider is that our band is a mélange of two distinct musical styles: jazz manouche on the one hand, and chanson française on the other. The famous personalities of the chanson tradition are certainly well-known to many Melbourne music lovers and have helped to make our music more accessible to the public.

Do you think music is an important part of the French identity? Why or why not?

In the case of jazz manouche, one would have to start with the observation that it is a very important part of the gypsy identity, although it has certainly been embraced by the broader French community and is now certainly recognised as one of that country’s great contributions to world culture.

The chanson tradition is a more classically French musical style and has a canon of song that is almost unrivalled in terms of lyrical sophistication and complexity. I think it is rare to find such a large body of what are essentially pop songs that demand so much of the listening audience lyrically. Gainsbourg is, for us, the ultimate example of this poetic talent, but you can also find it a lot earlier in the more light-hearted but equally gifted lyrics of Trenet.

Do you notice differences in the music tastes of Melburnians?

Well, yes, of course. We don’t get a lot of attention from the metal scene, for example.

What is the biggest misconception about French music?

That it is always elegant and romantic. Many of the great works of French music are strange and disconcerting (Satie and Ravel’s chamber music), or angry and political (Saian Supa Crew) or dark and twisted (Brel and Gainsbourg), or funny (Brassens, Les VRP), or just plain silly (pretty much every yé-yé song ever written). Not every song is about promenading down the avenues of Paris – although, to be fair, there are a hell of a lot!

The same answer to both: the French food!

Playing a gig in the open air at a café, riding my bike around my beloved Brunswick, spending too much time surfing YouTube for new music, practising accordion on my balcony watching the people go by – I’m terrible, but I’m trying to beat Sal at his own game (I’ll fail).

What quality does an excellent jazz band need to have to succeed and excel?

Energy, good stagecraft, and showing the audience that you love what you do!

What is your favourite chanson and why?

I do have a soft spot for ‘Nathalie’ by Gilbert Bécaud. As well as being a Francophile, I’m also a Russophile – I have an alter-ego as a DJ specialising in Russian, Slavic and Balkan party music – and this song has it all: a French guy singing about going to Russia and falling in love with his beautiful Russian guide.

Tell us about your performances and venues. Is there often a French influence?

We often perform at French-themed events and festivals, but we have played at venues of all different types. Most importantly, the venue has to be about good music!

In Melbourne, do you have a favourite boulangerie, fromagerie, café, patisserie or boutique?

Merci, Paul, for taking the time to speak with us at MyFrenchLife™. Visit La Mauvaise Réputation online to listen to their music and don’t forget to follow them on Twitter and Facebook to hear about upcoming shows!

Tell us: are you ready for a taste of La Mauvaise Réputation? Join the conversation in the comments box below.