Getting into new French fiction: ‘The Travels of Daniel Ascher’ by Déborah Lévy-Bertherat 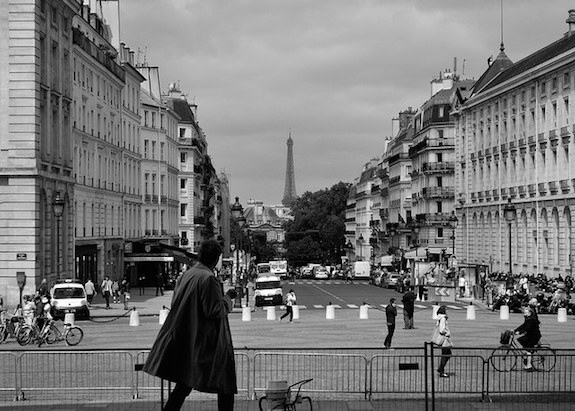 ‘The Travels of Daniel Ascher’, a sensational novel by Déborah Lévy-Bertherat, is unlike anything I have read before.

It’s a tale of family secrets and discovering one’s true identity, revolving around Hélène, a young French woman who lives in the eaves of a Parisian building and attends the Institute of Archaeology. While there, she uncovers her family history through the life of her great-uncle, a Jew sheltered by Hélène’s great-grandparents during the war.

With the help of the famous children’s book series written by her great-uncle, Hélène digs up both her family’s past, and a secret relating to the Nazi occupation. 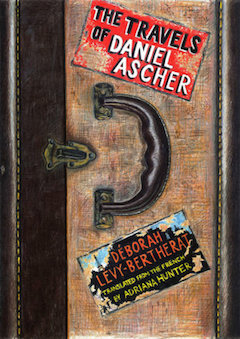 This book is marketed as a YA crossover novel, and although the cover evokes a young audience, the novel itself is far from immature. Beautifully written, it contains gorgeous descriptions of Paris, perfect for any Francophile. I was transported to France every time I opened the book.

The long sentences were unappealing to me at first, as was the lack of formal dialogue, but I soon learned to appreciate them as part of the author’s style – this is the way Lévy-Bertherat wanted her story to be read and I found that it encouraged me to linger on details and words. As Déborah told me, her “intention was to merge narration with dialogue and inner voices, suggesting that they all flow as one single stream.”

“I was inspired by the free syntax invented by ‘stream of consciousness’ writers, like Faulkner, Joyce and Woolf, whom I admire very much,” she says.

The novel is not driven by an intense plot but rather by the characters, focussing on slowly unravelling a secret and uncovering people and memories. Despite this, it is still a page-turner. A story of mystery, heartache and family ties, this stunning debut novel had me gripped until the very end, and made me yearn for Paris in a way I never have.

Fascinated, I talked more about the book with its author, Déborah Lévy-Bertherat…

Where did the idea for the novel, for Daniel’s sad story and the many secrets of the book come from? What did you want to explore when you set out to write this book?

The novel is short, but it took me many years to write. It arose from a question that has always puzzled me: what is left of one’s true self when one must live hidden, under a false name? The question is poignant when it concerns a child: all kids invent stories. What if the game becomes vital? What if you have to keep on lying, because the minute you quit the game, you’re lost? That’s why I chose to tell the story of Daniel Ascher, a Jewish child hidden by farmers in Auvergne during the Occupation.

It arose from a question that has always puzzled me: what is left of one’s true self when one must live hidden, under a false name?

My purpose, in writing this story, was also to explore the limits between fiction and lie, between mourning and resilience. Daniel becomes a writer, finding refuge in fiction. Out of his personal tragedy, he created ‘The Black Insignia’, a bestselling series of adventure stories for children and teenagers. Creation cannot erase grief, but it can turn mourning into a work of art. For that reason, Daniel’s story is not totally sad.

Your main character, Hélène, is an aspiring archaeologist who uncovers a family secret, and you often refer to archaeology throughout the book. What made you choose this career for your protagonist?

I’ve been fascinated by archaeology ever since I visited Pompeii as a child, and even considered studying it before choosing literature! In Hélène’s case, her choice is triggered by an unconscious inner quest: she must become the archaeologist of her own family’s history, because she senses a mystery surrounding her great-uncle Daniel, who is so different from the rest of them.

Creation cannot erase grief, but it can turn mourning into a work of art

For a long time, Hélène doesn’t want to know anything about his origins. She probably senses that therein lies too heavy a secret, one that could shatter her own identity. Archaeology teaches her the methodology for understanding: observation, patience, documentation. She eventually becomes a specialist in mosaics, a symbol of the familial puzzle she’s been reconstructing.

Your descriptions of Paris are beautiful. Are they inspired by a personal love for the city?

Thank you! I never get tired of Paris, although I’ve almost always lived here. I set the story in my own neighbourhood, between Montparnasse and the Luxembourg gardens, and I spent hours walking the streets to fuel my imagination. Daniel Ascher’s building looks a lot like mine – Andreas Feher, the illustrator, came to my place to draw it. 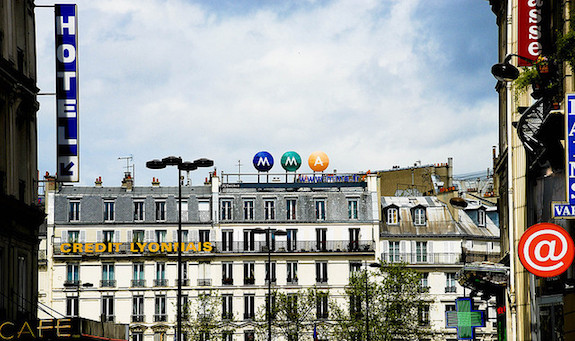 I very much admire Patrick Modiano, and the way he describes places, revealing invisible traces of the past. I tried to do the same kind of exploration with my own neighbourhood. Everything I write about rue d’Odessa, for instance, is real. If you go to no. 5, at the bottom of a courtyard, you will see marvellous public baths.

Do you have a favourite arrondissement in Paris?

I love the area where I live, Montparnasse, which straddles the 6th and 14th arrondissements. But I also like the old little streets surrounding the Panthéon (5th) and the part of the Marais that hasn’t been too thoroughly restored. In general, I prefer old crooked streets rather than wide ‘Haussmanian’ avenues. But I still have a lot to discover about Paris…

What made you want to set your novel during the Occupation, and did you have to do a lot of research on what Paris was like at this time?

My intention wasn’t to write a historical novel. I avoided explanatory chapters, but held on to everything that was exact – the main events (like the Vel’ d’Hiv Roundup, on 16 June 1942), as well as details (like the postcards sent from the Drancy internment camp).

Some Internet sites served as precious resources. I eventually had my manuscript read by a specialist, the historian Alexandre Doulut, to make sure everything was correct.

What made you tell the story from Hélène’s point of view and not Daniel’s?

I wanted to pay a tribute to the extraordinary acts of ordinary people, who risked their lives to save people they had never met before. Thanks to those ‘Righteous among the Nations‘, six out of seven Jewish children were saved in France during the Occupation. I chose to focus on one of those families: the Roches. Hélène is their descendant; she represents the third generation, the one that searches for hidden truths. 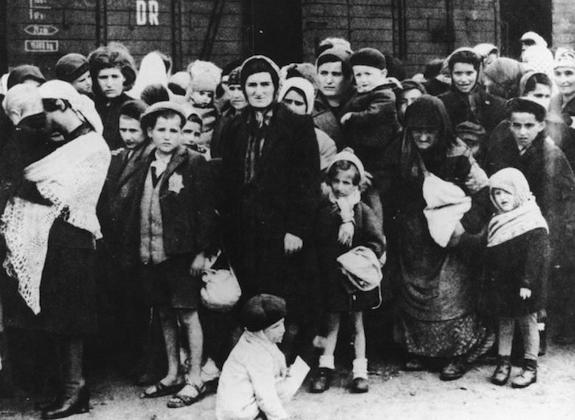 She asks her grandmother and great-aunt, Daniel’s adoptive sisters, what image they kept of his arrival at the Roche farm. She discovers the mixed feelings of those heroic families’ children: they had to welcome a young refugee into their own bedroom, treat him like a brother, without knowing how long he would stay, or if his parents were still alive.

Your writing is beautifully descriptive – when did you start writing? Do you feel that books you have read have influenced your writing in any way?

I can’t remember a life before writing. I think I always scribbled in some way – silly little stories, poetry, fiction. But it took me a long time before I eventually put a final full stop at the end of a manuscript and sent it to a publisher!

Many books have influenced me. I believe that a writer learns from imitating the classics, like an art student! As a teenager, I would copy pages from my favorite authors (Nerval, Flaubert, Colette) and learn them by heart.

For ‘The Travels of Daniel Ascher’, I found inspiration in one of my favorite books, Georges Perec’s ‘W or the Memory of Childhood’. Perec mixes the memories of his first years with chapters of a fantasy dystopia he wrote as a teenager. The reader gradually understands that the fantasy carries a symbol of the death camps, where Perec’s mother was killed. 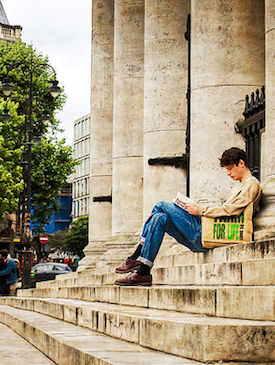 Novels, mainly. I like a good story, but can’t be moved unless the style carries me away – I am very sensitive to the rhythm of sentences. I particularly like French authors of poetic prose, like Lafon, Gallay, Bergougnoux, and Michon.

I believe that the deeper a book is rooted in a particular culture, the more it may become universal.

But I also like to be disoriented, so I read a lot of foreign novels. Among my favourite are García Márquez’ ‘One Hundred Years of Solitude’, Morrison’s ‘Beloved’, Kenzaburo Oe’s ‘A Personal Matter’ or ‘Heaven and Hell’ by Icelandic author Jón Kalman Stefánsson. I believe that the deeper a book is rooted in a particular culture, the more it may become universal.

Thank you, Déborah, for taking the time to speak to us at MyFrenchLife™.

Has this review made you want to read ‘The Travels of Daniel Ascher’? Perhaps you have already read it? Let us know in the comments below!

‘The Travels of Daniel Ascher’, published by Other Press and translated into English by Adriana Hunter, can be purchased on Amazon for the UK and Australia.