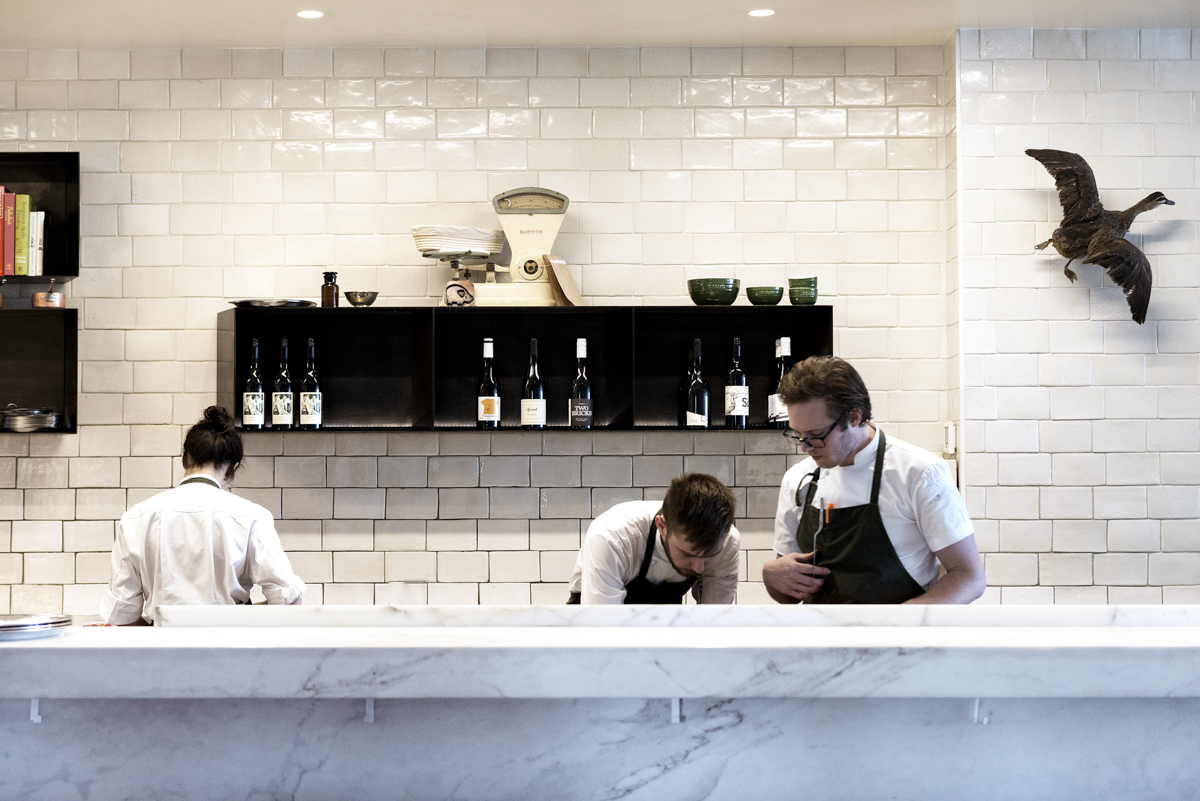 My French Melbourne: dine in style at French bistro Luxembourg 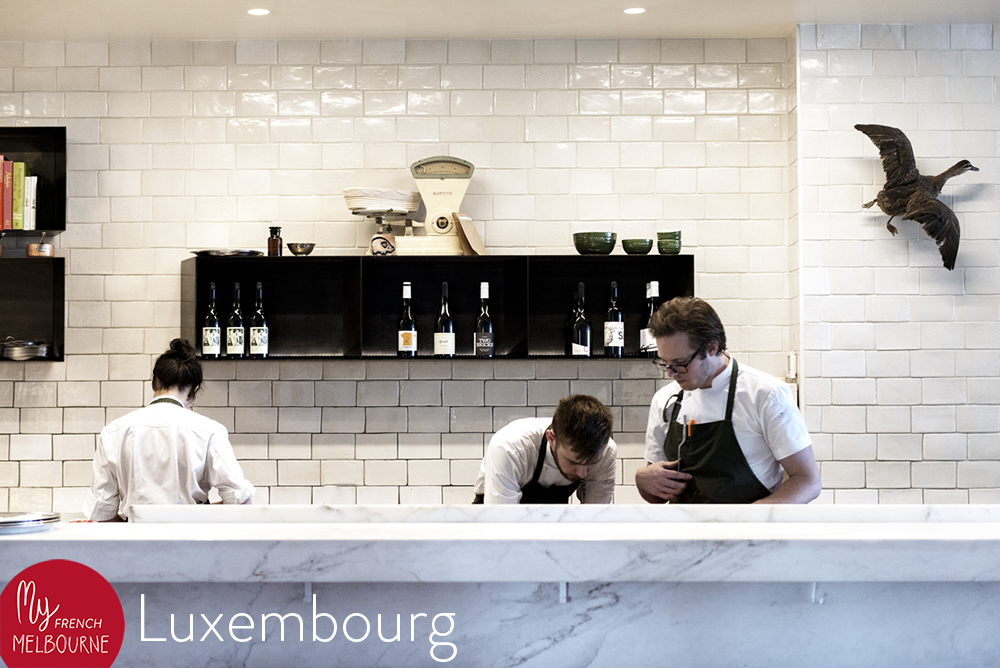 What does a young, innovative chef do when he gets back to his hometown in Melbourne after travelling to France to give and receive cooking lessons from the locals? He opens up a French-inspired restaurant, bien sûr!

Meet Chris Watson, the brains behind Luxembourg Bar & Bistro, named one of the hottest 50 restaurants in Australia. The layout is classic dining with a progressive twist – think tightly packed seating with sculptures branching off the walls. And funnily enough, classic yet progressive is exactly how Chris describes the menu.

We at MyFrenchLife™ and MyFrenchMelbourne™ were lucky enough to chat with Chris about his trip to France and his stance on modern-day cooking. 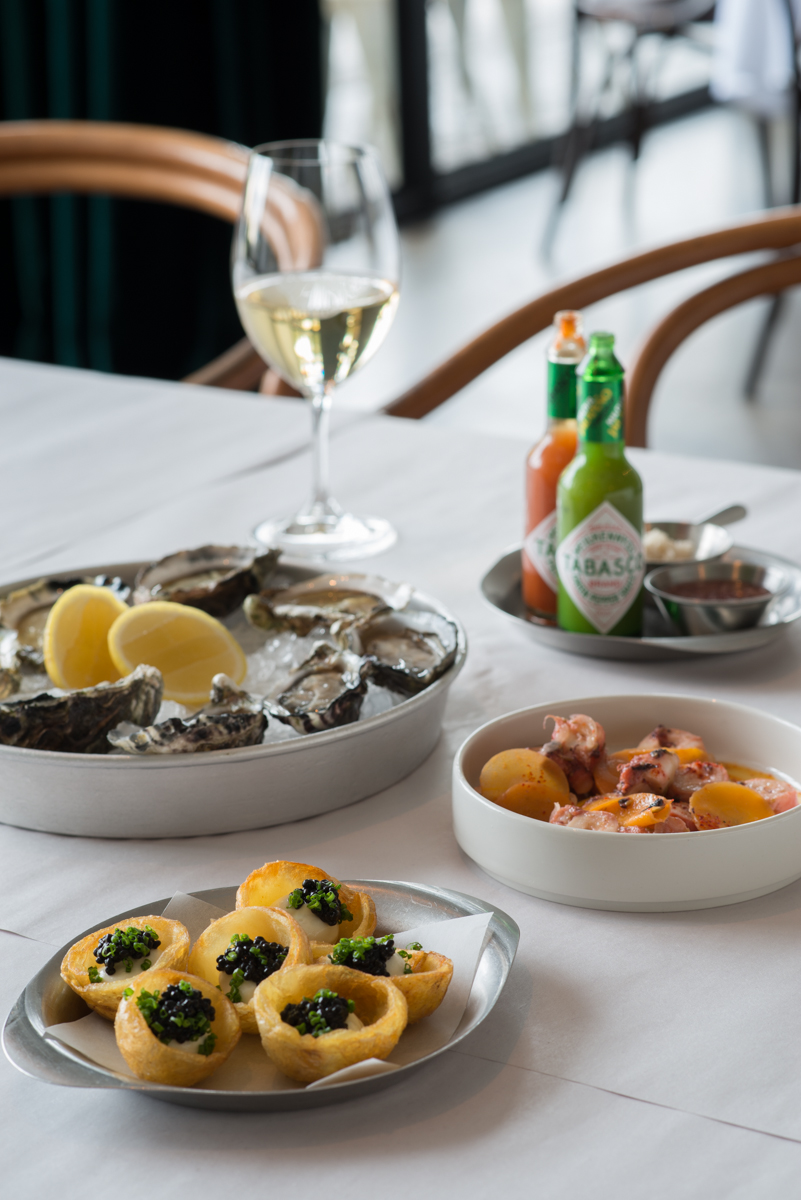 Tell us the story behind Luxembourg. What inspired you to start a French bistro in Melbourne?

The idea for Luxembourg began to develop during a trip Andrew [McConnell, business partner] and I took to France [in 2011]. Andrew had been invited to host a series of cooking classes in Burgundy, and asked me to travel there with him to assist with the classes. After a week spent immersed in local markets, wineries, and cooking with the guests, we then travelled to Paris to spend a week hanging out with friends, as well as eating and drinking – probably a bit too much!

We spent most of our time in wine bars, drinking really interesting, often ‘natural’ wines, and eating styles of food that had been developing over the last few years, and [that] has really made a mark on the dining scene there. It’s something that has been driven by the younger generation of chefs: [the use of] classic French techniques, but breaking away from ‘traditional’ ingredients and flavour combinations. This, in combination with a quite relaxed and fun ambiance, I guess, was something that we both thought was really exciting, and something we thought we could bring to Melbourne – and it really started to develop after that!

What is the most challenging part of adapting French cuisine to the Melbourne lifestyle?

Although we are lucky to have some really amazing suppliers that we have great relationships with, there are still certain things that are much better in France and other parts of Europe: for example, the fragrance of the strawberries, along with the amount of varieties [available], and the fraises du bois that are absolute flavour bombs. Obviously French cheese is amazing, but [it’s] mainly the availability of an abundance of amazing produce. We have some great farmers markets in Melbourne – although once you’ve seen some of the markets around regional France, it’s pretty eye-opening.

Usually in the morning, the chefs are the first in. We’ll have a couple of coffees, start receiving all the produce deliveries and start preparing for service. We do lunch Friday to Sunday, but earlier in the week it’s just dinner. We spend the day doing the mise en place, working on new dishes, and meeting with suppliers.

I really think people enjoy having an experience that’s in many ways familiar but also different and fun.

A couple of hours after the chefs arrive, the front of house team will start to arrive and start getting the restaurant ready for service: dressing the tables, going through the reservations list for the evening, as well as meeting with winemakers and suppliers. We are really lucky to have some great relationships with some amazing winemakers, as well as distributors and importers.

In the late afternoon we have something to eat, then there is an hour of craziness leading up to opening time! We are really lucky to have a really great team at Luxembourg. Running a restaurant is a tough gig [and] having a really great team is really crucial. 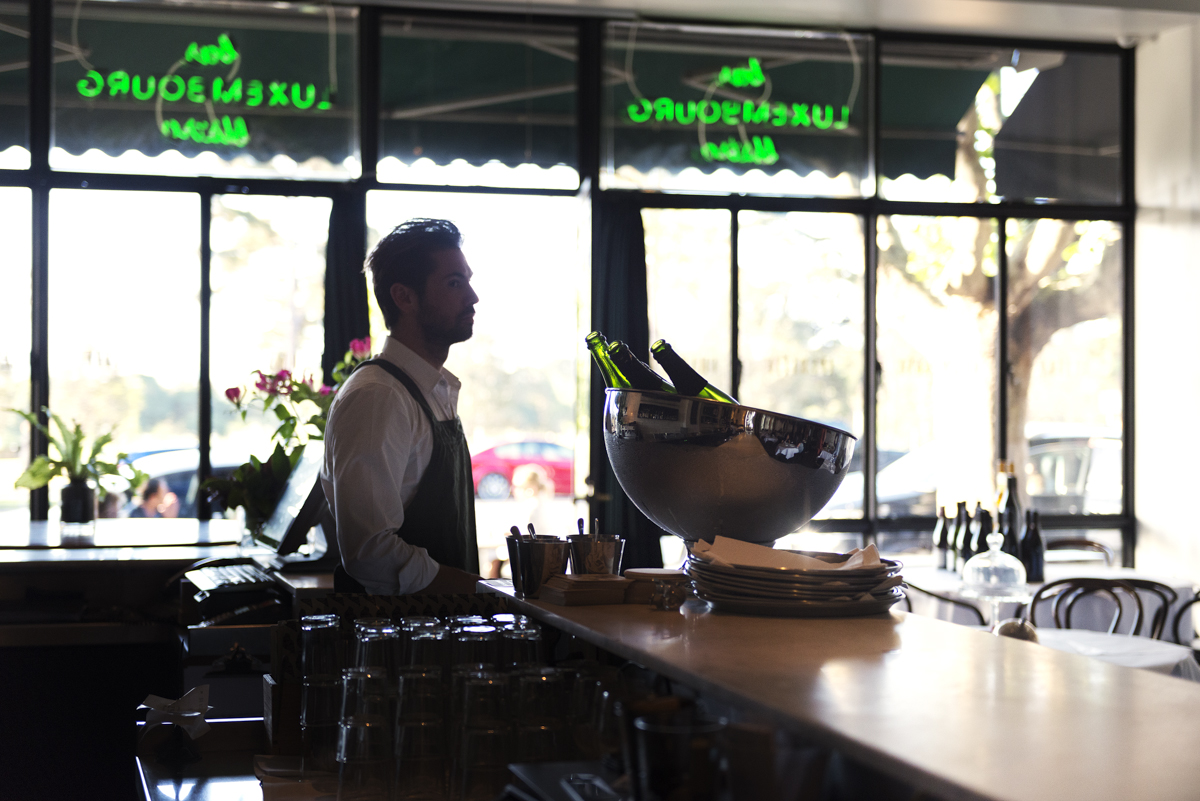 Tell us more about your kitchen team. Is it mainly a French team or international? Why is this?

In fact, they’re all Aussies and Kiwis! Believe it or not, in my experience looking for staff over the last five years, there aren’t actually a huge amount of French chefs floating around in Melbourne. That being said, occasionally we will see a couple come through and sometimes they have some pretty incredible experiences. Often with chefs from Europe their visa limitations can also be tricky to work around.

More and more French people are moving to Melbourne. Why do you think this is happening? Do you have many French customers?

To be honest, I’m not really sure, [but] I’d prefer to live in France if I could! Melbourne is an amazing place to live in though. I think in many ways we’re pretty lucky here [because] there’s a great lifestyle to be had living in Melbourne – plus the coffee is better here!

Walking around Paris is so amazing; seeing modern life juxtaposed against a backdrop of centuries of architecture and culture – it’s incredible.

We do get a few French people through the restaurant [and] we’ve had a really great response from them so far. The menu isn’t exactly what you would expect from a traditional bistro, and our wine list is pretty progressive but really exciting. I really think people enjoy having an experience that’s in many ways familiar but also different and fun. 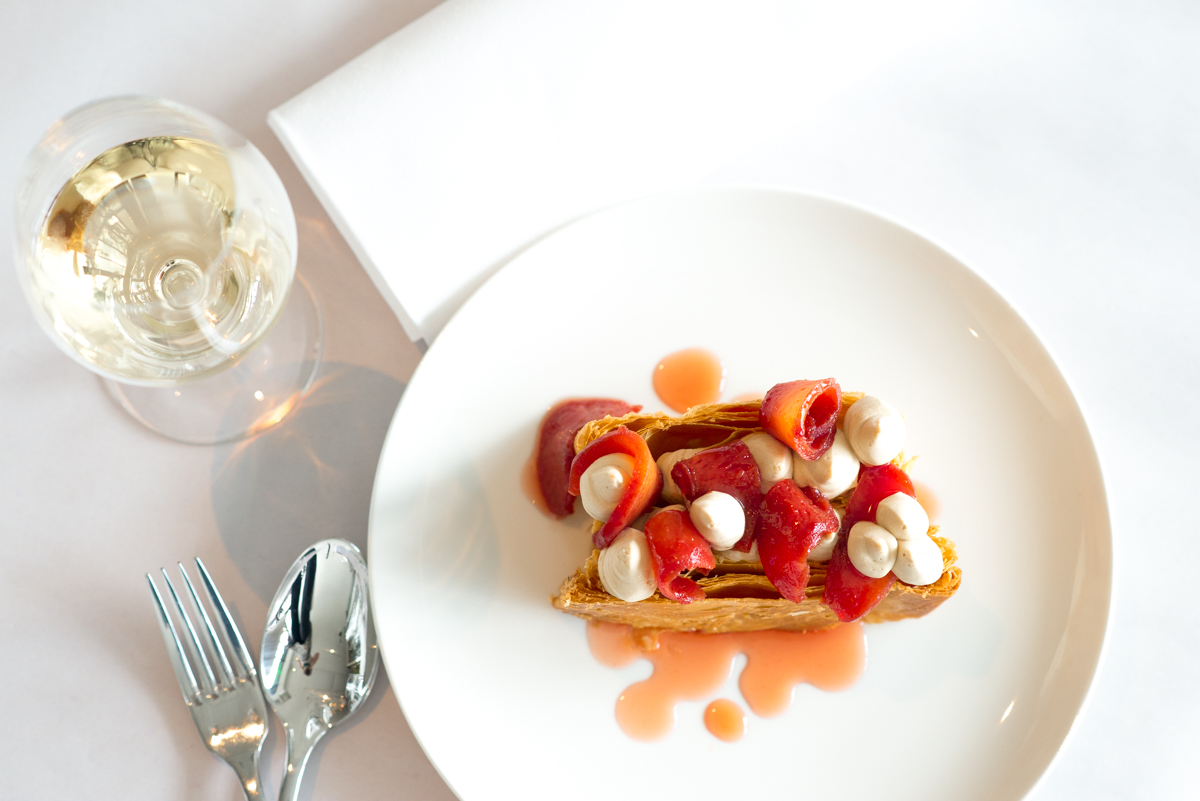 There is a lot to love about Melbourne. I grew up in the country in New South Wales, so it was really exciting to move to a big city when I was a young chef. I think the best thing about Melbourne is that wherever you are, you can get a great coffee and great food.

Again though, the availability of produce in France is unreal, and Paris is just the most amazing place. Walking around Paris is so amazing; seeing modern life juxtaposed against a backdrop of centuries of architecture and culture – it’s incredible.

Do you serve any specialties at your bistro? Is there something that people really seem to come back for?

Definitely oysters from our raw bar; we always have three or four types available. We work with Steve Filetti from Moonlight Flat in Batemans Bay – hands down the best oysters in Australia.

Also, we make our own charcuterie. It’s pretty labour intensive but the results are definitely worth it [since we have] control over the flavours that we use in each product, the amount of salt, and the dryness. Working in small volumes definitely yields better results than those that are commercially produced.

What are your three most popular items?

We have a snack of fried potato skins filled with whipped cod roe and avruga. People go nuts for those – they are delicious though! When truffles are in season, we do a classic French omelette packed with truffles. A perfectly cooked omelette is a thing of beauty. We also do a chocolate tart, baked to order, just served with whipped cultured cream. This is probably one of my favourites.

The menu is a real mix of French classics and more progressive modern dishes. We really try not to limit ourselves with any particular rules, but this [tart] shows that if you have amazing ingredients (Valrhona Chocolate and St. David’s cream), you can serve something really simple that will blow people away. 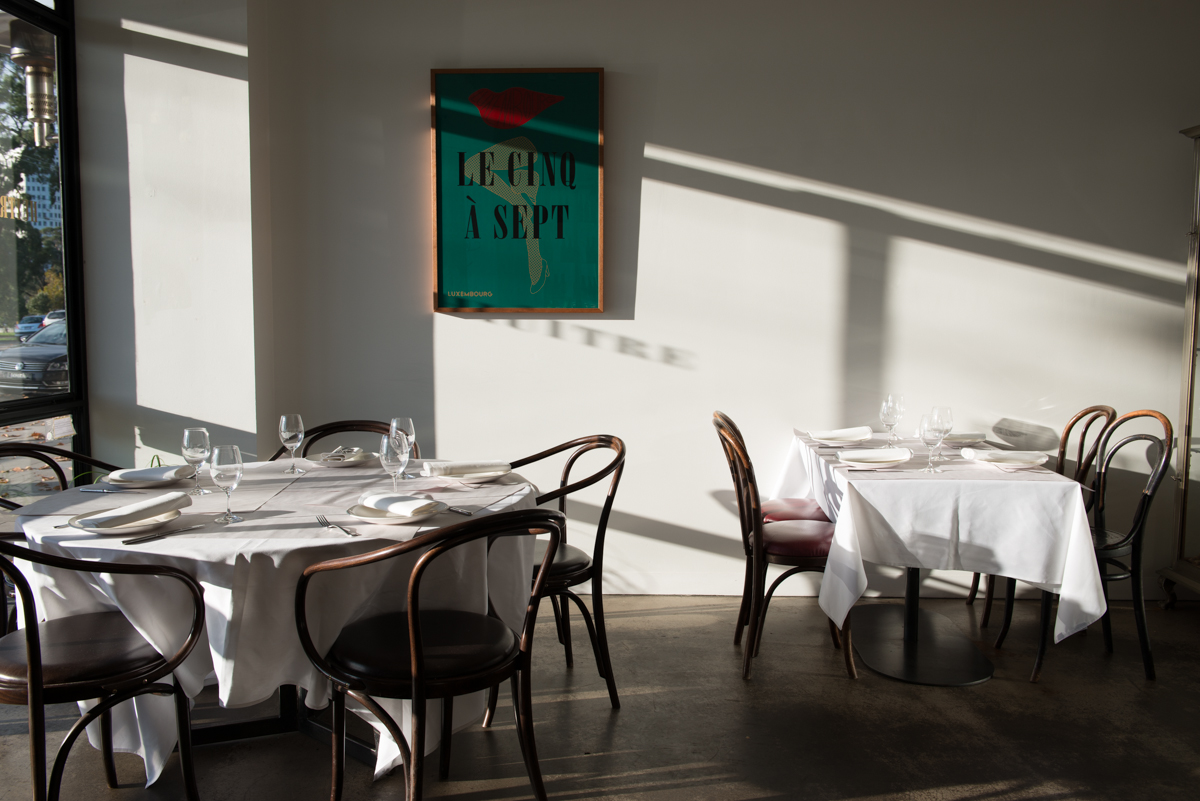 In Melbourne, do you have a favourite boulangerie, fromagerie, café, pâtisserie, boutique…?

For breads and pastries: definitely Tivoli Road Bakery, particularly their danishes. The puff pastry is so flaky and crispy as it should be, but such a rare thing to find!

In terms of cheese, we are right next door to Milk the Cow. They have a huge selection of perfectly handled cheeses, and not just from France.

For other dairy (milk and cream), you HAVE to look out for St. David’s products. These products are so important to what we do, as we make a bunch of different products with cultured milk – for example yoghurt and fromage blanc – and their cream is the best. We add some culture, leave it overnight, and whip it into cream the next day. It’s incredible.

My most frequently visited café is definitely Pope Joan [but] unfortunately, I don’t live around the corner anymore! I used to work with Matt [Wilkinson, chef] when I was younger and it’s been awesome to see Pope Joan be so successful and just continue to grow. They have great coffee, great food, and their shop Hams & Bacon next door is perfect for picking up some things to make for dinner. They stock excellent products from local producers, St. David’s amongst them.

All photos courtesy of Chris Watson.