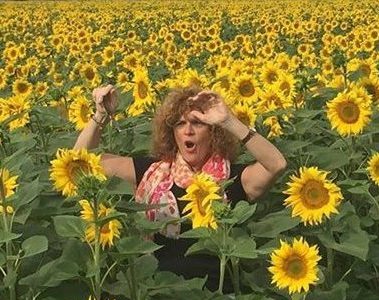 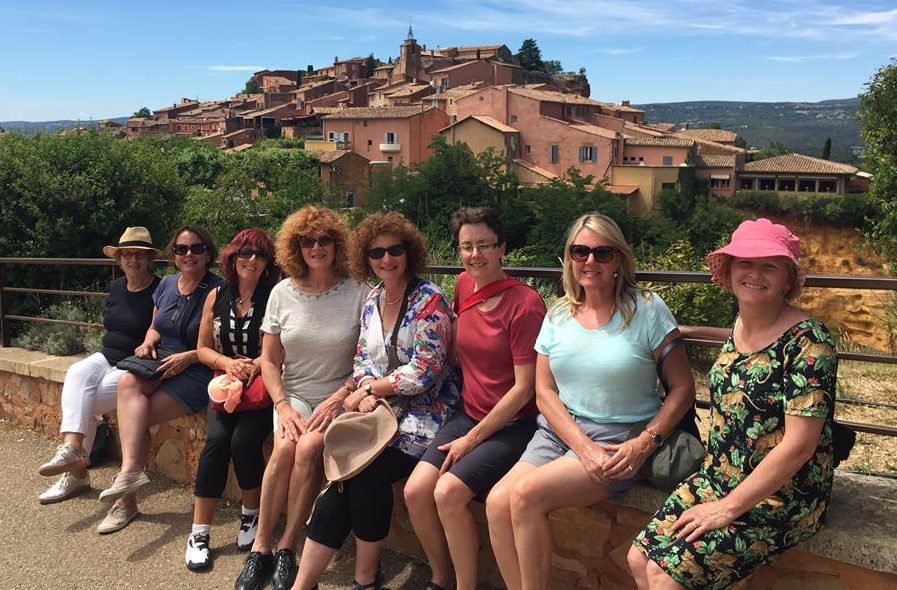 I’ve always thought that if I were going to France I’d like the fictitious character ‘Eloise’ to be my guide. But today I interviewed someone I’ve known for some years, and I have to say, that she could be seen as a grown-up, modern day ‘Eloise’, but instead her name is Nicole Ress, of WalktheFrenchTalk guided tours of France.

It is said that the character, Eloise, is based on a combination of Kay Thompson, the larger-than-life author of the well-known Eloise series, and her good friend Liza Minnelli: in their youth. I’m speaking of ‘Eloise’ (1955), who lived at the Plaza and the entire wonderful series of Eloise books, of course. When I was last in London and reading a bedside story to my elder granddaughter – together we read ‘Eloise in Paris’ (1957), it certainly was a romp!

Today, Nicole and I spoke of her French conversation classes in Melbourne and her intimate French tours of Provence and the Loire scheduled for June 2017 (refer end of this interview). I have to say that these tours must be so much fun! Entirely a romp! 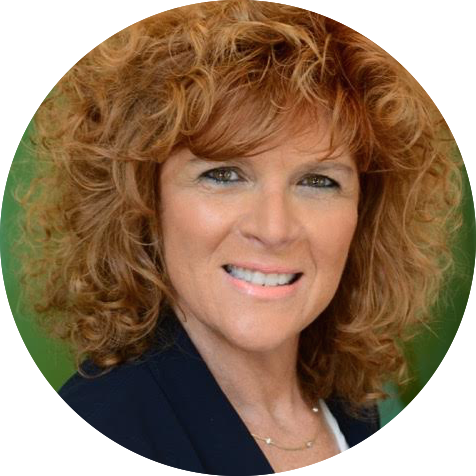 Upon reflection, I can see why I feel Nicole and Eloise are similar and the list is very long!

I won’t go on but I could, I really could! But you get the picture, don’t you?

The inspiration for the book, ‘Eloise in Paris’ came from the author’s own trip to Paris in 1956, to film parts of the movie ‘Funny Face’ with Fred Astaire and Audrey Hepburn. In the book, Eloise stayed at the no longer existent, ‘Relais Bisson’ at No. 37, Quai des Grands Augustins, on the left bank in Paris in the 6th arrondissement, whereas Nicole stayed/lived above La Coupole in Montparnasse near the junction of the 6th, 7th and 14th arrondissements, from 21 years of age and annually after that. Ooops, here I am speaking of Eloise again!

I tend to be an independent traveller and I haven’t really been into guided tours of France. So, over the years I’ve thought about what it would take to entice me to a sign-up for a group experience and what I’d look for in the best ‘tour guide’. This is what I came up with…

Actually, I think Nicole Ress ticks more of those boxes than Eloise would have!

Live the dream: make it a reality

There is an interesting backstory to Nicole and her French conversation classes in cafes and guided tours of France. The French classes were an idea well before the family hotel was sold and the Tours to France had always been a dream – 30 years of having that dream! So without knowing it, here I am, again, interviewing someone who has changed their life (or augmented their life), by living their dream – making it a reality. 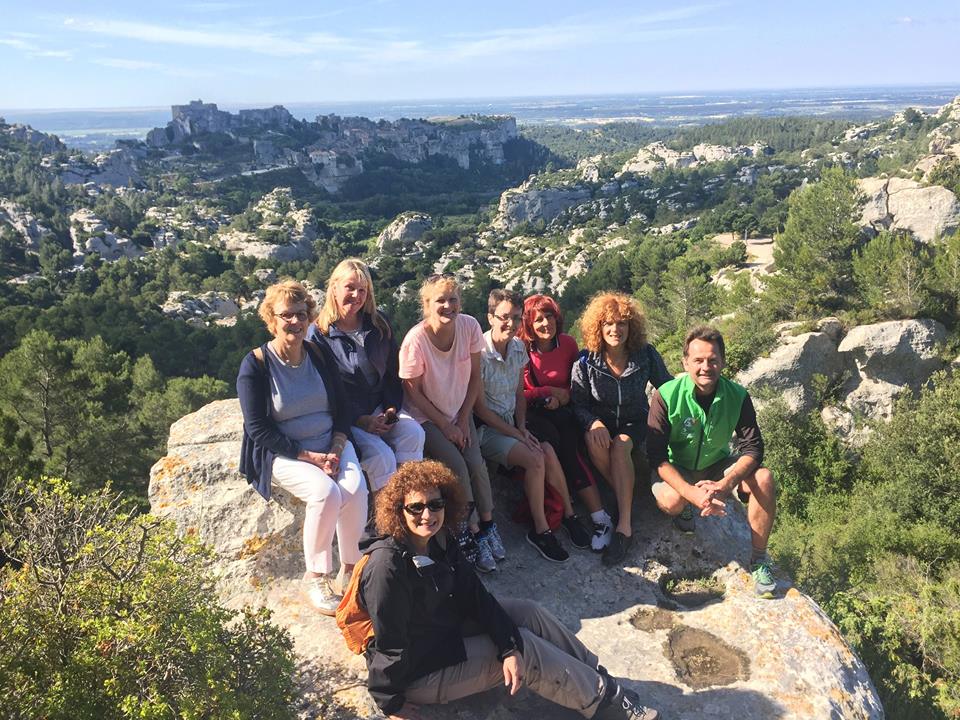 When I asked Nicole about the impact of bringing that long-held dream to a reality here’s what she said, “It is very important that people actually live their dream. Achievement changes people. The sense of achievement brings fulfilment and happiness and with it wellbeing and self-confidence.

Personally, realising my dream, after 30 years, was amazing and I must add here that I could not have achieved this without the constant unwavering support of my husband, Mike. His belief in me inspired me and I loved that he knew I could do it. It was just timing! It was if I was in a time warp and I felt the same as I did when I first had the idea as if no time had passed. I have such gratitude for the first group who trusted me with their time and holiday and such satisfaction with their enjoyment of the experiences I offered them.“

Who is Nicole Ress? 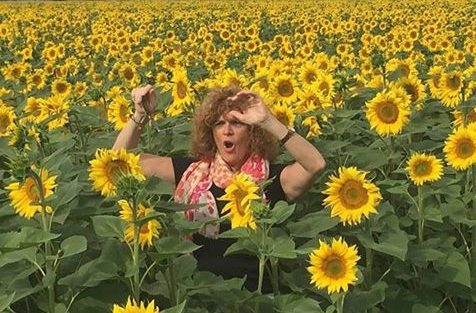 Whilst I’ve alluded to it, I have not yet told you that, in my opinion, Nicole is even more, the product of her upbringing than most of us. She spent years ‘under-the-wing’ of her ebullient grandmother, Chifra Ress, in the family owned and run ‘Ress Oriental Hotel’ in Collins Street, Melbourne. Today the vibrant, energetic, caring, Nicole is oft said to remind people of her grandmother. Nicole says “…she was a philanthropist, a woman with a warm personality, who could turn her hand to anything! She was kind and loved life, she was an SP bookie and ran the hotel alongside her husband, Mick Ress and son Leon, always with her sleeves rolled up!”

To complete the picture of Nicole’s upbringing her Mother, Suzanne, was and remains, a beautiful French woman: highly competent, a perfect hostess, a self-taught cook and French pastry baker. To this day, she delights all with her delicious baking, superb presentation and immaculate grooming and style. It was actually Nicole’s Mother, Suzanne, who coined the phrase the ‘Paris end of Collins Street’ and her family were the first in Australia to obtain a permit to place French cafe tables, chairs and umbrellas on the footpath in front of the family hotel, which covered a block at the top end of Collins Street where Collins Place is now. ‘France in Melbourne’ and the ‘Paris end of Collins Street’ expressions were born.

Hospitality runs in Nicole’s veins, she’s programmed to look after people so as to make them feel special, and I’ll add that she does so naturally – and loves it. After more than 25 adult years of hospitality training, she continues to get great delight in helping others achieve beyond their expectations. 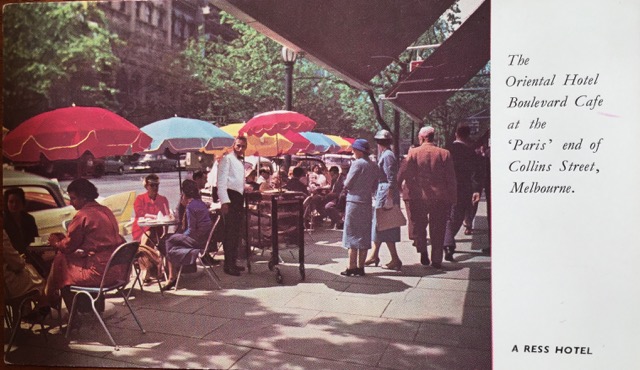 Nicole loves to train and teach others, so as to give them confidence and to empower them to achieve and enjoy themselves. In my mind, this encapsulates and explains why Nicole thrives in hosting French classes and taking her ‘WalktheFrenchTalk’ guided tours of France, especially for those who are learning French. Her guided tours of France are unique and cater for absolute beginners through to very competent intermediate level French speakers.

It would be the small intimate group tours that would interest me, so I asked Nicole to explain why people love her her guided tours of France so much and what will be so special about the 2017 upcoming tours to Provence and the Loire Valley… 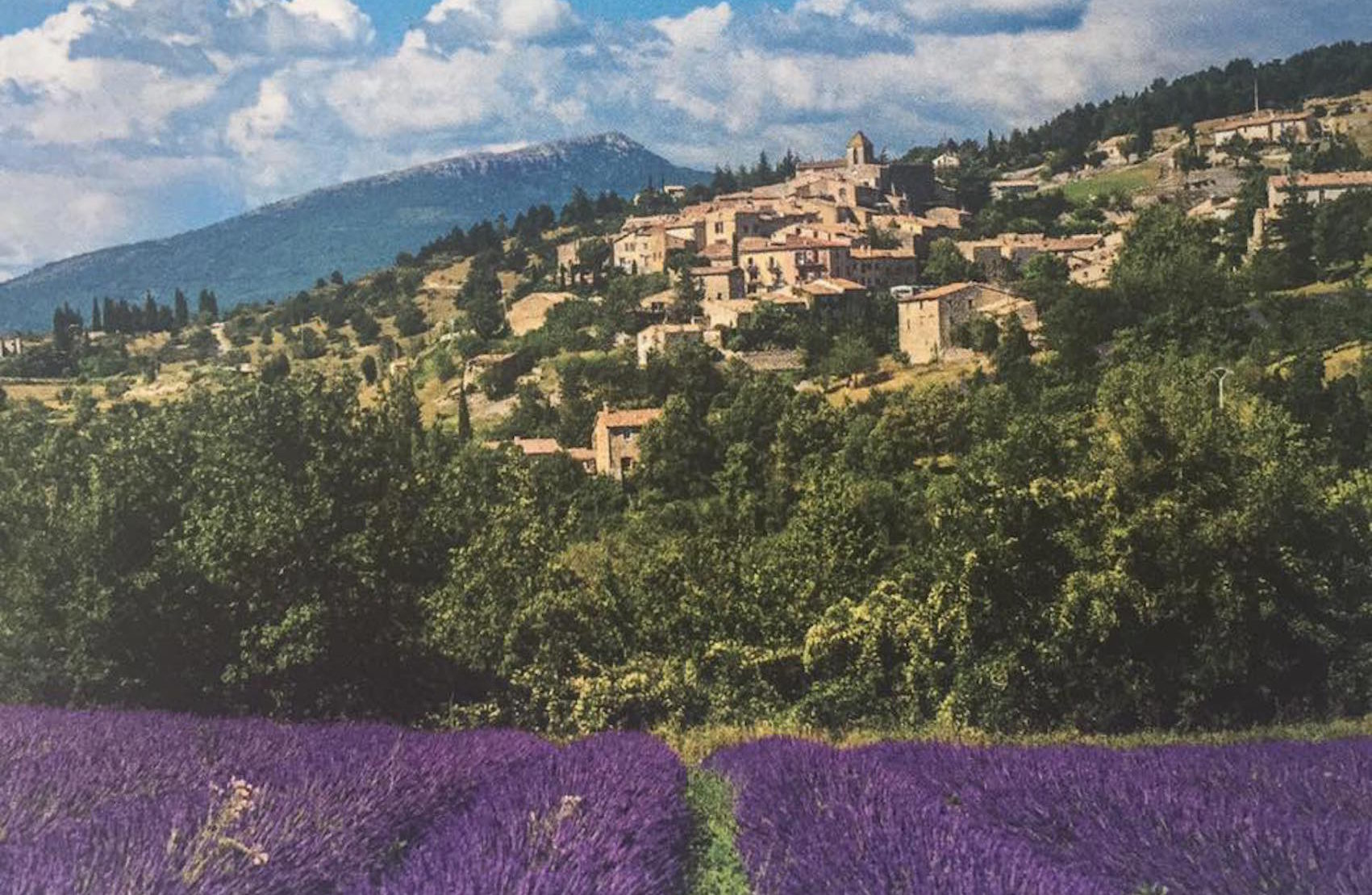 Here are her words: “‘The Walk the French Talk’ tours are bespoke and intimate, with only 7 guests, myself and another experienced team member. I am able to adapt the itinerary to better suit the differing needs of the group if and where required. This together with my experience, personality and natural nurturing character, mean I provide individual attention and pre-empt their needs, people say this is what creates a unique experience and where they can expect the unexpected!”

Nicole goes on to speak about her 2017 guided tours of France: “Provence + Loire = fantastique! The camaraderie and friendship will endure for a lifetime, well past the end of the tour. This has already occurred on previous trips, to the point that guest travellers have joined the tour more than once. Also with my professional crew, who have extensive experience in each of the regions, I provide a full turnkey experience on this bespoke small group tour. 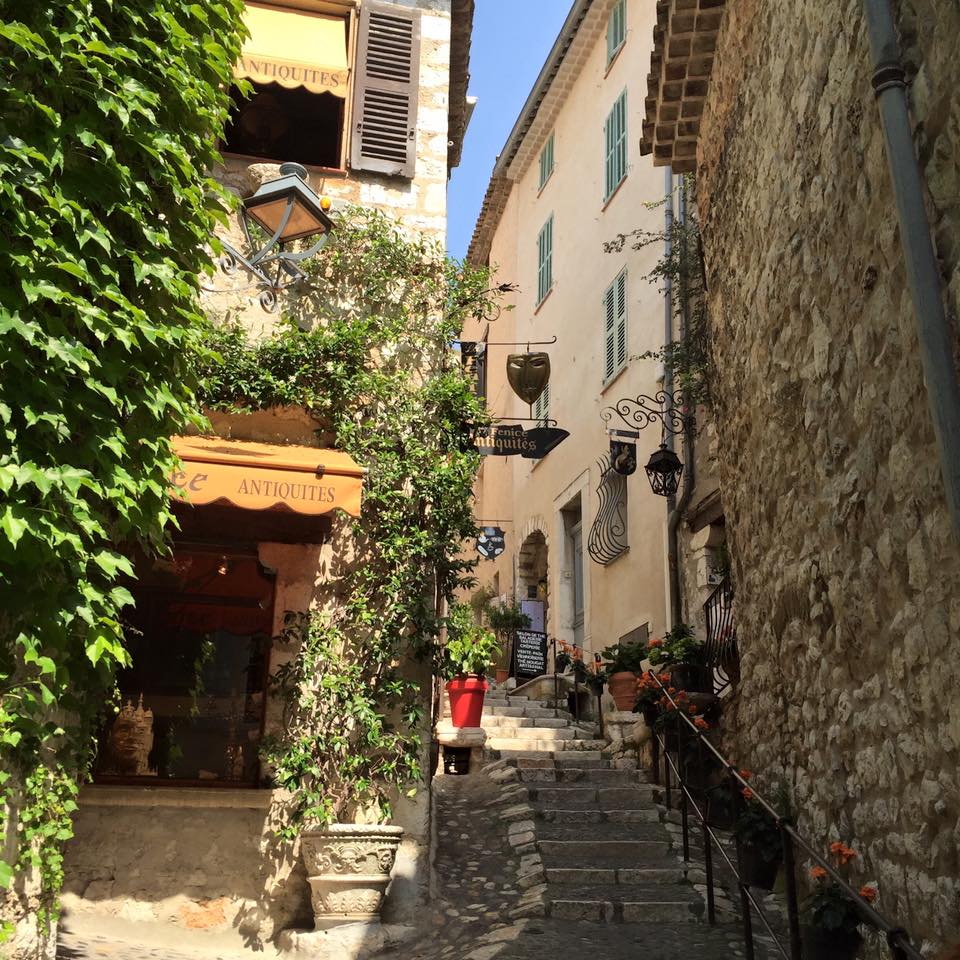 “Nicole is an energetic, creative and nurturing tour leader. Her ability to talk in french to everyone she meets opens up unexpected doors leading to adventures beyond the usual itinerary. My second Walk the Talk Trip. Bags are packed for 2017”
Deborah, Melbourne 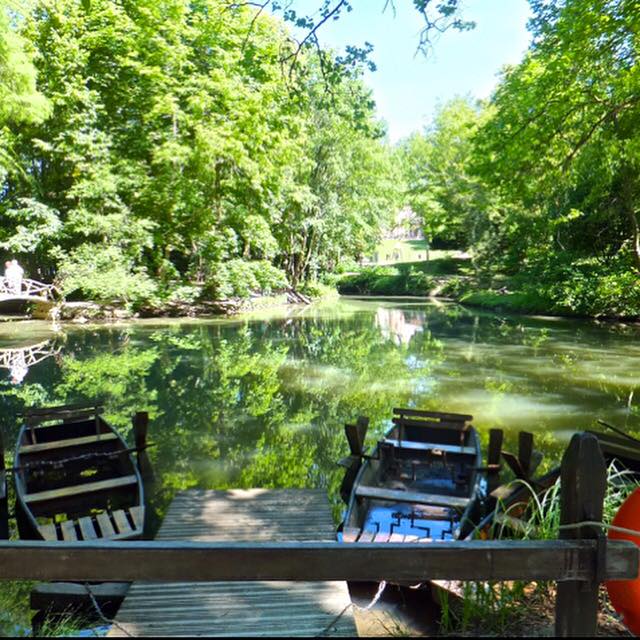 “Nicole’s energy and enthusiasm was inspiring to all her companions, and she gave the students many opportunities to have free time to practice French with the locals. Better than Abercrombie & Kent. Can’t wait to travel again”
Fay, Melbourne

“What an amazing experience with Nicole and this great intimate group. Can’t believe how much french I learned and made lasting friends. Where are we going in 2017?”
Tonia, Melbourne

“7 stars, fabulous attention to detail. No request was too much trouble for her. An unforgettable experience”
Jenny, Sydney

In Paris where are your favourite spots?

Your other favourite places in France?

Would you be interested in an intimate WalkTheFrenchTalk tour? What appeals to you about guided tours of France? Let us know in the comments below.

Image credits:
1. Eloise in Paris, via Amazon
2. All other Images courtesy of Nicole Ress