French city guides: 7 reasons to visit Béziers in the South of France

Travelling around France, people will often ask me where in the country I’m living. When I reply: “Béziers in the South of France”, the response I usually get is something along the lines of: “Quel dommage!” or, “you poor thing”. Bigger cities often look down on Béziers, described as run-down or even dangerous.

Béziers is one of France’s oldest cities, and admittedly, some parts could use a face-lift, but you only have to look up to discover elaborate and ornate buildings from La Belle Époque. Slowly but surely, these historic buildings are being renovated. In the two years that I’ve lived in Béziers I have seen this city transform into a vibrant place full of culture, passion, pride and history.

So ignore all the negative comments, and trust me when I say that Béziers is definitely worth visiting. Here are seven reasons why.

This grandiose cathedral dating back to the 13th century is one of the best sites in the city. The interior is impressive with its large organ, ornate alter, numerous artworks and a rose window. The cathedral occupies the highest part of town providing magnificent views over the surrounding vineyards. If you have the guts and the stamina, you can even climb the spiral staircase to the highest bell tower to see spectacular views of the entire city.

I’d suggest parking in the centre-ville and making your way up to the Cathedral through the old town filled with narrow alleyways and boutique shops.

Béziers is situated on the famous Canal du Midi – one of the greatest construction works of the 17th century. The canal was conceived by the city’s very own Pierre-Paul Riquet, joining the Mediterranean and the Atlantic by linking several sections of navigable waterways.

You can access many parts of the canal in Béziers and surrounding areas. However the main attraction in Béziers is ‘les neuf écluses’ or the Fonserannes Locks. Consisting of a staircase with eight lock chambers and nine gates, it is a spectacular site to see the boats being raised a height of 21.5m in a 300m long chamber. You could spend hours watching each gate being opened one by one. Better yet, take a boat tour along the canal to experience the locks on the water.

It wouldn’t be a visit to Béziers without a stroll down Les Allées Paul-Riquet in the centre-ville. Named after the aforementioned Pierre-Paul Riquet, the tree-lined street is situated right in the centre of town surrounded by shops and restaurants. Nearly every day of the week there are markets held in Les Allées selling fruits and vegetables, antiques, and flowers.

At one end of Les allées you’ll find the Théâtre Municipal, and at the other a picturesque park, Le plateau des poètes. This hidden gem in the centre of town boasts a dazzling array of flowers, ponds and bird-life. It’s perfect for an afternoon walk with the kids, feeding the birds, or reading a book.

4.The food scene in Béziers

There are also many affordable bistros and cafés located along Les Allées Paul-Riquet and in the centre-ville. Look out for the daily menus out the front of restaurants for two to three-course meals for as little as 15 euros. 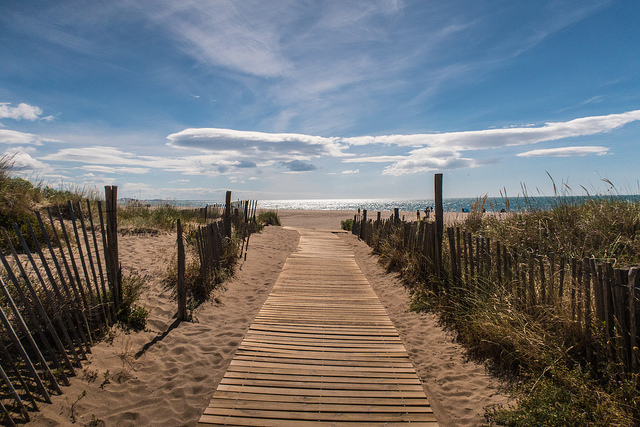 One of the best things about Béziers is its location; close to big cities such as Montpellier, Toulouse and Barcelona, it is also surrounded by beautiful countryside and beaches. It has been undisputedly named ‘capital of the Languedoc wine producing region’, and as the title suggests, Béziers is surrounded by vineyards! So on your visit to Béziers why not take a drive to Faugères or Saint-Chinian to taste some good quality wines.

Once you have your bottle of wine in hand, head to one of the nearby plages for a picnic.

Discover one of the most important archaeological sites in France; the Oppidum d’Ensérune is a significant Gallic settlement of the Oppida civilisation. From its vantage point atop a hill, you will find a truly amazing view of fields radiating out of a central point in the form of a sun. The museum holds a rich collection of ceramics, weapons, and furniture from this pre-historic civilisation.

Running just under the hillside of the Oppidum d’Ensérune is the Canal du Midi passing through the Malpas Tunnel.  There is a story behind this tunnel. There was great disappointment when the building of Paul Riquet’s Canal du Midi reached the hill d’Ensérune in 1679. A few meters deep, diggers realised they were cutting into brittle sandstone and Prime Minister Colbert halted the operation.

Despite the risk of collapse, Riquet was determined for the canal to pass through the hill  and his team continued digging through the hill in secret. After just eight days, the tunnel was completed with a concrete ceiling. This 165m long tunnel still stands today and prevented another lock from needing to be built.

So, I commend Béziers to you as a city of natural beauty, great food, and historic sites. I hope to see you here soon!

Have you ever visited Béziers or the surrounding regions? What is your favourite thing about the South of France? Let us know in the comments box below.