How France has influenced my life: by Carolyne Lee – MyFrenchLife™ member

This article was contributed by reader-member Carolyne Lee following a discussion in our ‘le Bulletin’ member newsletter about how lives can be changed due to an interest in France and the French language.

You too can provide the occasional article or suggest article topics as a member of MyFrenchLife™ – MaVieFrançaise®.
As a member, you too can submit content and also join the conversation through the comments section below.
To become a member make sure that you sign up! See the red button top right of this site.

Academic and author Carolyne Lee recounts the story of her relationship with France; from studying French as a schoolgirl to reconnecting with the language as an adult, and now translating texts and writing French cookbooks!

I first began studying French at the age of 11 at my grammar school in England. It was my first foreign language and surprisingly (to me) I was good at it, and I loved it. 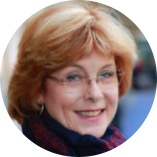 Three years later I went to France on exchange for 6 weeks over the summer and stayed with my pen friend Brigitte’s family in the lovely town of Annecy in the French Alps of southeastern France.

I felt more at home with that family and in that town than I’d ever felt before.

Brigitte and I, aged 13 and 14 respectively, felt instantly at ease with each other. The following year, though, before my parents could reciprocate and host Brigitte at our house, my family and I left England for Australia.

French falls through the cracks

In Australia I continued with my French study right through to undergraduate university level, but for some reason changed my major midway through my degree and ended up specialising in English. Over the next 25 years, through several marriages, raising two children, and earning my living via a long career in teaching, French sort of fell through the cracks in my life: taking with it my correspondence with Brigitte.

But a secret longing for the language and for France remained deeply embedded in me and never went away.

A visit to France

In 1997 my husband and children and I spent three months based in the UK, enjoying that Australian peculiarity and privilege, ‘long service leave’.

From England we made a five-day trip to Paris, travelling via Eurostar which was then still relatively new. Both my children were learning French so the main motivation for the trip was to show them France and to encourage them to try using the language in real situations. I too revised my very rusty French for the occasion and was surprised at how much of the language was returning to me each day that I was there.

The embers of my earlier passion were starting to be reignited. On returning to Australia, I began attending evening classes to revise my French, an endeavour that was to continue for a long time.

I dreamed of one day enrolling in an advanced French course lasting several months at the Sorbonne in Paris.

Yearning for a French life

In 2002 I found myself widowed with grown up children, and so I began going to France each year in the Australian summer, during my long breaks from teaching.

Through my job, I even enjoyed two semester-long sabbatical periods, attached to French universities, in 2007 and 2011. Mainly thanks to these periods, I made a lot of French friends, became relatively fluent in French, and really wanted to live there for a year or more, but it wasn’t possible: I had my career, my house, my dogs, and then a partner, all in Australia.

But I began to see that even in Australia I could organise my life to keep France and the French language ‘with me’ all year round, to a certain extent – through reading French books, writing to my friends in France, watching French news and films, and listening to French radio; and all this I did, and still do.

Then, while reading a French book one day, a book that I was enjoying very much, I found myself automatically translating it in my head! I wrote some of it down and contacted the author, who was very happy with the beginnings of my translation. After a couple of years (I was still working full time) the translation was finished and the book was published by Palgrave in New York. (English title: ‘The Seduction of Fiction’).

Now, with a friend who is a retired French chef in Paris, I have produced a short Kindle book of traditional French recipes, and am halfway through translating another book.

Since retiring from the university, nowadays I manage to spend around 5 months in France each year.

Oh, and I reconnected with Brigitte in 2002; she still lives in Annecy, and I see her most years when I am in France.

Has France and/or the French language changed or influenced your life like it did for Carolyne Lee? We love hearing your stories! Share your ‘French thread’ stories with us via email or in the comments.