What is ‘real’ these days

Almost daily I walk through the gardens near my home and I frequently enter via a pathway under this tree.

The strong healthy green tree which is now exposed as having NOT been totally authentic.

What in the heck am I talking about?

Well, let me put it another way.

Until the moment that branch shattered off the tree and smashed to the ground, it appeared healthy.

To the best of my knowledge no-one knew that it was not as it appeared.

No-one knew that that large branch was hollow, empty!

It had, probably for a long time, been holding on to it’s ‘healthy’ guise.

Who’d have known, not even the park rangers it seems!

This tree had fooled everyone, including me as I walked under it almost daily…

So what? you may ask…

Well, it had me wondering… on a number of levels…

For some time I’ve been concerned about social media and the pressure, it creates, especially Instagram and now Snapchat. The pressure to be visually and publicly perfect! The implication being that if you’re not perfect you’re not ‘good enough’…

When in this frame of mind last week I came across an article that disturbed me greatly.

It didn’t shock me.

It didn’t really surprise me.

What is authenticity? does fear play a role here?

But, for now, I quote from an article about life in Beijing: “What researchers call the “online-celebrity economy” — which includes e-commerce sales driven by personalities, virtual gifts and sponsorships — totalled 52.8 billion yuan in 2016, research firm Analysys International estimates. That is bigger than China’s film box office.

Young women used to come in with photos of movie stars they wanted to look like, says Luan Jie, a 30-year veteran at the Plastic Surgery Hospital of the Chinese Academy of Medical Science in Beijing. Now they show him ­photos of stream queens.

“Successful online stars have a big impact on the aesthetics of our society, especially on the younger generation,” says Luan. The ‘online-star’ face, with its attention-getting features, is turning women into cartoon characters, he says, and many look the same.”

Meet Den Qian from Beijing and here is her story and that of DJ Liu Shuang Read it here..
(The photos and story are credited to DJ Liu Shuang)

Liu Shuang, a 20-year-old music DJ in Beijing who uses social media and live-streaming for promotion, blames the online-star face for her career struggles. Her solution: further surgery — a 12-hour procedure last month to give her what she calls “a mixed-race face”.

“Most girls get plastic surgery that makes them look Japanese or Korean. Mine is more exaggerated, so more differentiating,” she says.

Liu got a discount for the procedure, which she says would ordinarily cost more than 300,000 yuan, by allowing the clinic to use her before-and-after photos.”[Note: that’s roughly Euro 40k]

Ms. Deng and Ms Shuang are trying to stand out among some six million live streamers, most of them women, appearing on more than 200 platforms in China.

Deng Qian has had more than a dozen cosmetic surgeries, to slim her arms, enlarge her breasts and change almost every part of her face.

“Everything above my belly button is fake,” she says.

Above the neck, Deng’s aim was an “online-star face” — big eyes, long nose, high forehead and sharp chin, a look pursued by young women seeking online ­celebrity and the big income that can follow.

Why are we afraid of being vulnerable?

When I read articles like these and others & when I spend time drooling over ever perfect Francophile images I find myself wondering why we are so afraid to expose our real selves? Our imperfect self?

Why are we not more comfortable in our own skin – as it is?

Why are we afraid to be vulnerable?

… And then I came across a podcast that I want to share with you.

This one is by Brené Brown and I’d call her a collector of stories more than a storyteller.

She would refer to herself as a researcher and more recently as a vulnerability researcher.

But, I suggest that she tell you that story… 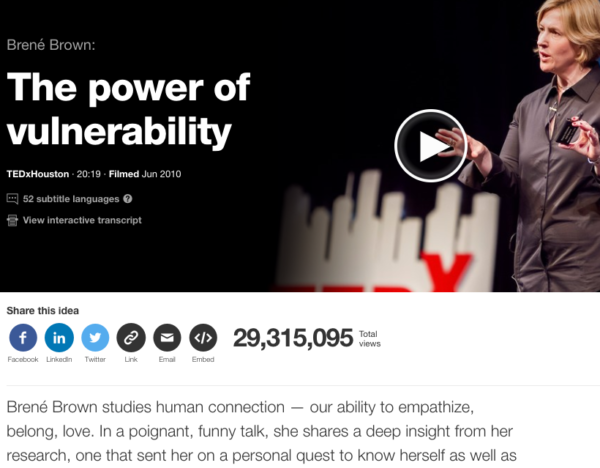 Let me know your reaction after you’ve had time to listen & think it through.

Brené’s TedTalk took me back to thinking about the fallen branch: hollow, shattered and exposed!

And, from Brenés ‘Power of Vulnerability‘ talk, here are some of the concepts & discussion points which fascinated me – let’s chat below: –

If you missed any of the recent le Bulletin ‘Conversations’ you can play catch up here and now!