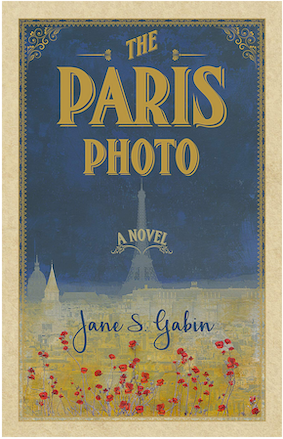 Jane S Gabin’s words skip across the page with a deft touch and lightness in total contrast to the depth and imagery in this story set in Paris. Initially, I found myself rereading sections as the gravity overwhelmed me.

I was deeply moved.

This is a story on two levels, crossing two periods in history and is as much about what is unspoken as what unfolds before the reader’s eyes.

Those readers familiar with Paris will walk with Ben along the Boulevard du Montparnasse, the Boulevard Saint-Michel and appreciate as he allows himself to rest and take in the grey views of the Notre-Dame. The streets are pockmarked and broken, windows boarded, and the buildings display evidence of recent shelling.

There is a quietness, interspersed with the sounds of children’s laughter from the Jardin du Luxembourg.

We are taken to Paris in the days following liberation, but the scars run deep.

American soldier, Corporal Ben Gordon finds himself in France following the liberation. It is August 1944. In the days after Pearl Harbour he enlists for service and although not fit for active duty, is given the position of establishing the mail service for the troops.

Prior to leaving for France he proposes to his girlfriend Sylvia and is given an address from a French acquaintance Anne, who asks if he could find her relatives. His Jewish heritage and Yiddish language skills give him insight and empathy and Ben’s empathy draws in the reader.

Rebuilding lives in a broken city

Ben finds Anne’s relatives and a deep friendship develops between Ben and Simone (Anne’s cousin), her mother Mira and Simone’s young son Guy. Simone’s father and husband are missing. They are generous and welcoming and Ben is drawn in to their confidence.

Mira and Simone talk of their time under occupation, of having to change names, of being in hiding.

Their voices have such a flat matter-of-factness when talking of the fear, atrocities and unknown, that is hard to comprehend, especially if you have not experienced such turmoil.

There was no sensationalism, rather, the events and fears and flattened, buried deep, only to be slowly and soberly revealed.

Similar to the events I piece together from my father’s experience in New Guinea.

But there is also hope and Gabin conveys this well.

This is not a bleak read.

Feelings are developing between Ben and Simone,  but he has his fiancée and she, a missing husband.

The second part of the story takes place when Ben’s daughter Judith discovers ‘The Paris Photo’, a photo of her late father with two women and a young boy, in a box of old photos.

A researcher, Judith sets out to unravel the mystery of this period in her father’s past.

She has a date and a name and her search begins.

Guy is now an elderly man in his eighties. Contact is made and Judith prepares for her journey to Paris.

Gabin takes us through modern day Paris. Here we walk through Père Lachaise Cemetery, Le Marais, and along the Seine. Gabin opens Paris’s doors to us, a side trip to the tomb of Abelard and Héloïse, Musée Jaquemart-André.

As Judith traverses the arrondissements so dear to many My French Life™ readers, more of Guy’s memories are revealed, piecing together not only the history, but the fragmented pieces of Ben, Simone, Sylvia and Mira’s lives.

The novel  ‘The Paris Photo’, will appeal to lovers of historical fiction, particularly those with an interest in WWII. Dr Jane S Gabin’s strong research skills and historical knowledge are evident in this story of history, romance, intrigue – all treated with great compassion. There is a message in these pages relevant for today.

How well do you know Paris? Do you enjoy stories of Paris and France set in different periods of history? Please share your thoughts with us in the comments section below!