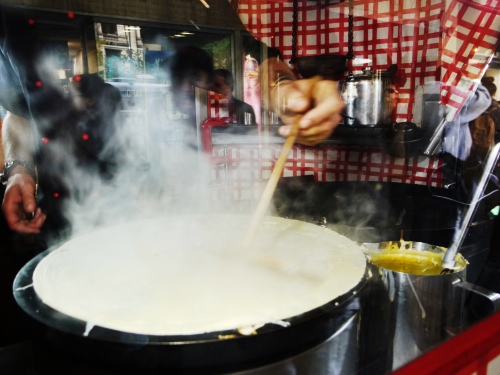 Pizza, souvlaki, sushi, dim sum. The Melbourne CBD isn’t that big, yet it feels like the ‘Street Food Universal Exhibition’¹. Gastronomy here, however, lacks a bit of sweetness, so if you stumble across ‘La Petite Crêperie’ or ‘Waffles On’, even if you’re running late for work, I don’t see why you shouldn’t stop.

There’s nothing better than street food for relieving a little hunger, absorbing a hangover, satisfying a sweet tooth or breaking the monotony of a journey to work. The concept is simple: minimum utensils, quick and easy to prepare and eat (pot-au-feu in the subway is a no-no) and cheap. If France loves her meals at the table, she also loves her street food, with le Jambon-Beurre, roasted chestnuts, crêpes and waffles. 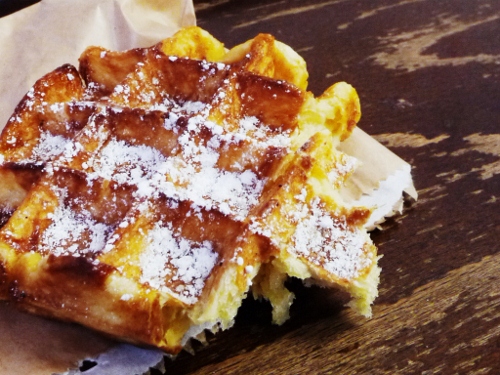 Traditionally, crêpes and waffles are winter dishes (try chocolate on a hot waffle in 30°C). And traditionally, neither one is French (waffles are from Belgium and crêpes from Brittany; and Brittany is a world apart from France). Nevertheless, it’s not as if November was hot in Melbourne, and both occupy a prominent place chez les Gaulois during the festivities of February and March² and on the beaches of the Atlantic coast in summer.

To play the game until the end, I chose a rainy afternoon in Melbourne before going to work for my sugar binge. 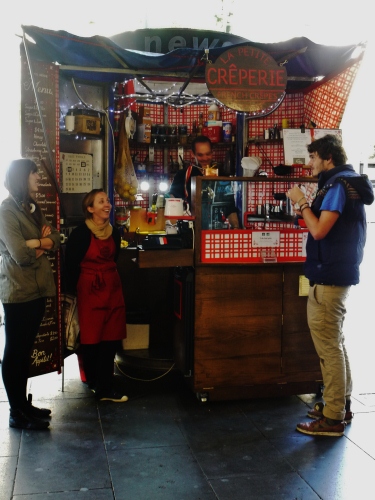 A crêpe doesn’t have thirty-six tasks to perform. Soft, delicately sweet and crispy on the top, that’s all we ask. As well as coming with a cardboard cone to collect the flowing chocolate, because yes, it will overflow (but that’s street food for you: hands on). And all the requirements are met at ‘La Petite Crêperie’.

So you’re hesitating with the menu? Besides the traditional sugar/lemon and jam, I must present the most popular one, the salted butter caramel crêpe. $5 guys! $5 only for homemade, generously spread and melted caramel dripping to the bottom of the cone to lick with (or without) your fingers. Or a flambéed Grand-Marnier crêpe. Setting fire to the food: sensational à la Bretonne.

In a corner of Degraves St, between falling-apart graffiti and a sordid alley lies your salvation. It’s not difficult to find, there’s the scarf of Reims Stadium hanging on the wall. Not something you see everywhere in Melbourne. A waffle as I like it must be golden, light, crisp, with icing sugar rushing in all the twenty cells, spreading on your nose when you bite into it. At ‘Waffle On’, I would certainly prefer it to be a little lighter but let me tell you that for $4, it’s a hell of a bargain. And they have Orangina.

I couldn’t picture a better Australian city than Melbourne (except Hobart perhaps) to host this culinary decadence. With its menopausal weather and 23% of all Australian frogs having found refuge here, with my eyes closed, I could almost believe it… Until the fateful moment where I hear in the background a: “Hey luv’ how ya doin’?” The ease and simplicity of Australians go well with waffles.

References:
1. No, the Street Food Universal Exhibition doesn’t exist. Except in my dreams.
2. Crêpes have become a typical meal of these two celebrations, Chandeleur on February 2nd and each Mardi Gras (with waffles).