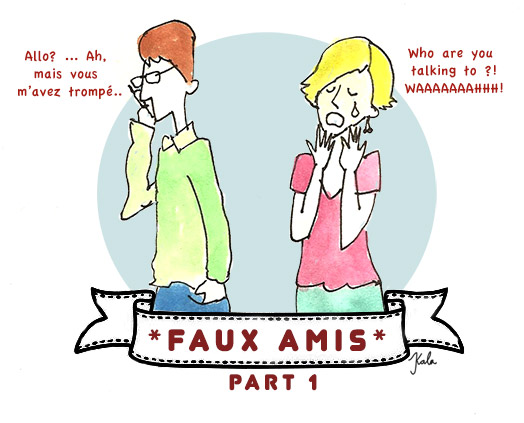 How good is your French? I do not, in fact, advocate fluency where fluency is not going to happen, and I always insist people try to not worry about it too much. As long as you get your message across it really doesn’t matter so very much.

However, there are translations and ways of handling a word or phrase that can be quite confusing. My husband once answered the phone to a French lady and he wanted to tell her she had got the wrong number. “Vous m’avez trompé”, he told her – you have been unfaithful to me. He meant, of course, “vous vous êtes trompée”.

The French call these “les faux amis” – false friends. We just call them misunderstandings. So, exceptions to the rule, accents and situational differences notwithstanding, here are a few:

The English word famous is better translated as reconnu or célèbre in French.

Sometimes, fameux means ‘considerable‘, and it can also mean infamous.

The English word popular is best translated in French as bien aimé. The French word populaire has a subtly different meaning, as it means well-known or celebrated rather than widely liked.

It also translates to the word ‘popular’ in the sense that it is ‘of the people‘, thus the common translation to ‘working class‘.

A piece in English becomes morceau in French, whereas une pièce is a room.

The English word cravat become a noeud papillon (a butterly-knot) in French, whereas their word cravate is a tie.