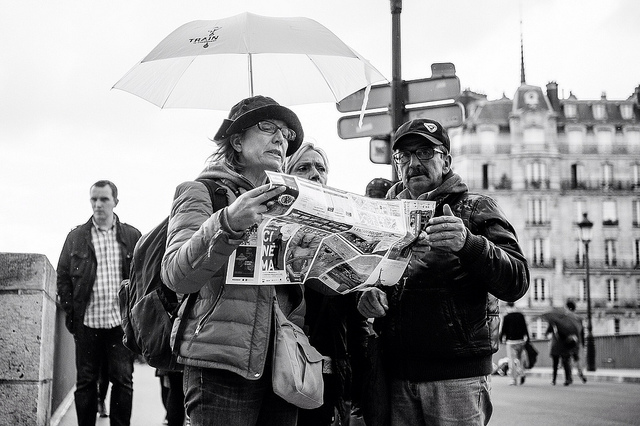 1) When I’m forced to make small talk with a stranger in one of those awkward social situations where you don’t know what to say, like embassy dinners, arranged marriage or double-bunk holding cells, we have a readymade topic of conversation.

It seems as though everyone has some kind of connection to the United States:

“Oh, you’re from the States? I’ve got cousins in Denver!” Or “an uncle in Saint Louis,” “a brother in Guantanamo,” “a timeshare at Betty Ford” — something.

2) No cultural judgments. Everyone, when meeting someone of their own nationality, makes more or less conscious presumptions about the other person’s social and educational background based on speech patterns, grooming, manners, etc.

As a foreigner I am immune to this type of assessment from French people. This means that I am instantly accepted into most groups, with no condescension based on my perceived classiness or, more likely, lack thereof.

I once was invited to a dinner of cognac producers, all a generation older than I, and got along fine with everyone, even though they were supposedly a very insular group. A French person with my social background (raised by itinerant hostage negotiators) and education (expelled from reform school for putting Drano in the tattoo guns) probably wouldn’t have fit in quite as easily.

3) You know all those petty, irksome rules that everyone hates, like no jaywalking, no bike riding on the sidewalk, no more than three glasses of wine per day and “love and honor till death do us part”? Well, in France, none of them apply to foreigners.

Apparently they don’t apply to French people either, but a perk’s a perk.

4) Nothing beats the pure, pervasive sense of satisfaction that comes from being stopped on the street by a lost native and giving them, in a very obvious non-French accent, concise and accurate directions to their destination.

In my case, this advantage comes with a mitigating factor: my sense of orientation is so bad I often realize afterwards that I have steered someone in entirely the wrong direction.

But I still savor the satisfaction. As Marie Antoinette said, in one of the most oft-abridged misquotes in history, “Let them [get lost if they won’t invest in a map and think that randomly selected passers-by should be infallible, as though they want to both have and also] eat cake.”

5) But the most important psychological benefit that comes from living in another country is in the “difficult-to-describe-but-you-know-it-when-you-feel-it” category. It can perhaps best be summed up in the phrase, “Here’s me in France.”

Even after 30 years, I still experience this every time I walk out of my building. An immediate mood of contentment comes over me, triggered by the knowledge that I have been lucky enough to make a life in my favorite place on earth even though I was born 4,000 miles, an ocean and a language barrier away.

At those moments, somewhere deep inside my brain I have a little doppelgänger who says, “Mmm — here’s me in France.” He’s a smug, smarmy pipsqueak who ought to be slapped, but he says it anyway.

And keeps saying it until something happens to break my reverie, like getting run down by a cyclist on the sidewalk. Or stopped by someone saying, “Excuse me, can you tell me how to find rue de… Hey! Don’t I know you from reform school?”

But of course, like everything else in the universe with the sole exception of multi-level marketing, being a foreigner in France also has disadvantages.

By sheer coincidence there are also five of these… Read on…

Image credit:
Lost in Paris, by Hugo Bernard via Flickr.