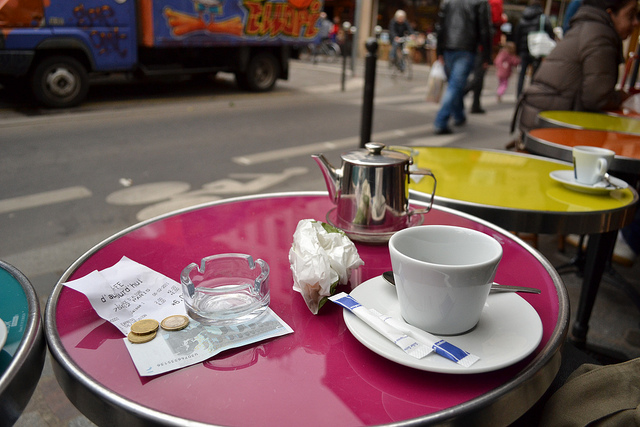 1) Even after living in Paris all this time, there are still things that I don’t get about France, including:

Has no one ever heard of fire escapes? Or permanent press fabrics? How about more than one ice cube at a time?

Why are handwritten menus so hard to read?

How is it that the entire population seems to have memorized the numbers of all 101 départements (vaguely the equivalent of states, numbered alphabetically to avoid any geographic order) so that everyone, including illiterates and winos, knows exactly where ’27’ is?

How can anyone actually listen to Johnny Hallyday?

2) After living in France all this time, there are now things that I don’t get about the United States either. When I go back for a visit I always find myself asking stupid questions:

How many numbers do I dial to make a phone call?

Which one is Khloé again?

How do you turn the safety off?

Why should it take the waiter longer to describe my entrée than it takes me to eat it?

You’re sure that’s the age of consent?

3) As a foreigner, I am not able to participate in the democratic system that has the most influence over my life. Once in a while the question is raised of letting foreign residents like me vote, but so far the French people have decided to struggle on without the wisdom of my input.

There is, however, an upside to this: whenever things go to hell in France (i.e. every other week) and everyone starts grousing about whoever happens to be president at the time, I can safely proclaim that I didn’t vote for him, and wouldn’t for all the money in the world.

Unless of course they change the law, in which case €250 should just about do it. €350 if you only have a check.

4) Once in a great while I come across a self-styled political polemicist who presumes that because I am American I am a spokesperson for my country’s government and/or corporations.

At various points in the past, I have been held personally responsible for forcing French people to eat unhealthy fast food, starting the Gulf War (twice) and ruining the world economy (once) (so far).

This is patently unfair. Do I hold all French people responsible for affronts to humanity like squatter toilets, andouillette and Johnny Hallyday? Well, actually I do, but hey — two wrongs don’t make a right.

But the worst thing about being a foreigner in France is…

5) It’s hard to complain to strangers.

This doesn’t bother me often, but it can be bothersome. The prevalent attitude among a certain segment of the population (the segment that sociologists classify as ‘irredeemable dickweeds’) is that only a French person can legitimately register displeasure about anything that goes wrong in France.

I can tell when I’ve met one of those jingoists because instead of addressing whatever issue I may have raised, they ask “Where are you from?” At this point I can see the future more clearly than Nostradamus ever did: if I answer truthfully the next words I hear will be, “Well, here in France…” followed by a fatuous rationalization of their dickweedish behavior.

The implication is that, no matter how long I’ve lived here, because I was born elsewhere I can’t possibly know how things are done in France and have no right to complain about anything.

I have been on the receiving end of this ‘logic’ while, for example, trying to complain about execrable service from a large retail group, trying to voice disapproval (and disbelief) of a reckless, speeding driver who nearly ran me over, and trying to ask a moron who was smoking on an airplane if he would mind complying with what is probably the most widely-known ban in the history of mankind.

In the latter case, it was an international flight, from Bangkok to Paris, but that didn’t stop this particular jet propulsion scientist from flying into the “Alors, ici en France…” rant while the plane was nine thousand meters over the Middle East. His reasoning stank almost as much as his breath.

If I ever get into one of these ridiculous face-offs with a 29-year-old native, I would theoretically know better than he how things are done here, although somehow I doubt that this theory would enjoy wide acceptance.

Ah, well — at least we’ll have a readymade topic of conversation.

Are you a foreign resident of France? Do you think you’ll ever feel like a native? Share your opinions in the comments box below.