The French disconnection: division of labor, multiplication of wait times. 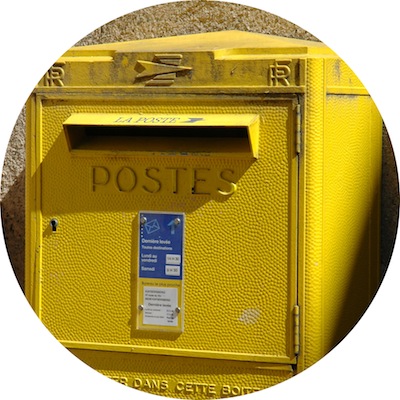 After 30 years in Paris, I have never seen or heard of a new post office ever being opened to reflect shifting demographics.

As a result, many neighborhoods have way too many people for not enough post offices. And by “many neighborhoods” I mean “every neighborhood that I used to live in.” Of course, I could buy stamps in tabacs, but for anything more complicated than mailing a regular one-page letter I had to go line up at La Poste.

Ah, the lines. In the 1980s the windows at French bureaux de poste were organized by function: certain employees at certain windows did only certain things. There would be, for example, one line for stamps, a separate line for domestic letters, a different line for international letters, a distinct line for packages, another one for money orders, yet another for certified letters and, because the French PO also runs a bank, two additional lines for deposits and withdrawals. The only thing missing was a dedicated line for holdups.

Due to this diversification, some lines contained a statistically significant sample of the population, while other windows had maybe five customers per day. But even in the latter case it didn’t always mean less of a wait — as I learned on my first Christmas here, when I wanted to mail some packages back to the States.

When I arrived at my local post office, there was no one in front of the international parcels window. Already visualizing my name on a plaque commemorating the shortest Parisian postal errand in history, I presented my taped-up supermarket boxes full of gifts and crumpled-up ‘Figaros’ and was handed a stack of papers.

“There was a sign on the door warning parents not to leave small children unattended [in the line] — not because it was dangerous, but because they could grow enough during the wait to become unrecognizable.”

The scales then fell from my eyes, and the plaque from my imaginary monument, because sending a package to the US involved filling out a full-page form that required a staggering number of details about the sender, the recipient, the contents, its value, its street value, its sentimental value, its projected depreciation over five years, etc., etc.

A brief history of time squandered

And that full page had to be filled out in — get this — sextuplicate. In violation of my usual principles, I am not exaggerating here: they needed six copies of each sheet. With no carbons.

Since I had four packages, it took the better part of an hour to get all of that info down in noir and blanc, during which time I suggested to the guy at the window that he take care of the people who by then had lined up behind me. He declined and waited it out, apparently content to just sit and watch me get writer’s cramp. Strangely, the other customers seemed to think that this was perfectly normal.

Then, one fine sunny day, the postemaître général, or whoever’s in charge of these things, caught on to the fact that paying employees to stare into the middle distance while customers in other lines die of malnutrition was not the pinnacle of efficiency. In the early 1990s, the French PO switched to a system whereby every window could handle every function.

“It was of course impossible to predict which [lines] would move fast and which ones would still be ten-deep when the sun explodes.”

This helped, but not enough. At the time Nancy and I lived on the northeast side of Montmartre, where there was one single post office on rue de Clignancourt serving three big neighborhoods. The lines there were epic. There was a sign on the door warning parents not to leave small children unattended — not because it was dangerous, but because they could grow enough during the wait to become unrecognizable.

Picking a window at that post office was like betting on a cockroach race. Every line would have 15 to 20 people in it, but it was of course impossible to predict which ones would move fast and which ones would still be ten-deep when the sun explodes. Read on…

Return to part one – Read on in part three
Image: French post box, via Wikipedia