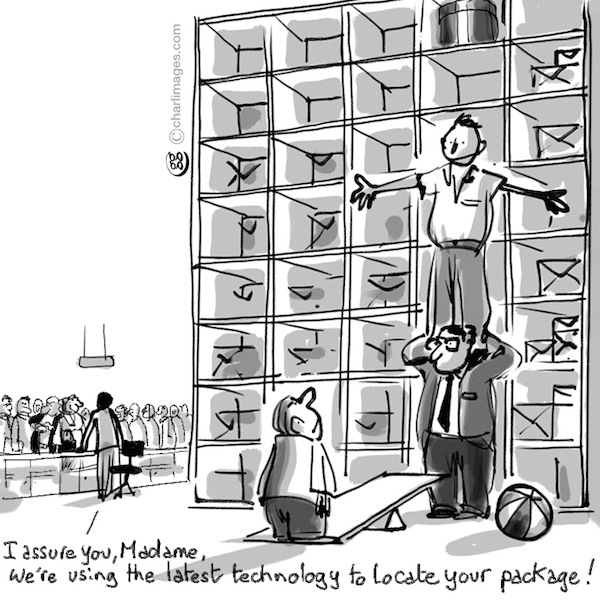 In which I summon up the ghosts of French post offices past — one of those things that were definitely worse in the good old days.

Of all the changes that I’ve seen in France’s legendary bureaucracy in my three decades as a trainee Parisian, the most drastic have probably been in the quality of the post. Not the rail on which they run you out of town for mispronouncing bouillabaisse — the mail system.

The post offices that I frequent in France today are (no kidding) sleekly modern, well-equipped models of efficient, friendly service. I still can’t quite get over it: I rarely have to wait for more than one or two other customers ahead of me. For any transaction, I’m almost always in and out of there in a matter of minutes.

There is essentially one reason for this admirable user-sympathique-ness: e-mail. In other words, the PO’s impressive performance has been made possible by what venture capitalists and sex toy designers call ‘disruptive technology’: much, if not most, of the communication that used to be done using mashed tree parts is now accomplished using ones, zeroes and electricity.

“Going to the PO back then was like getting a root canal: something to be put off as long as possible, and then endured with dread, resignation and, whenever possible, the help of substance abuse.”

This methodological evolution has lightened the load of the French postal service to the point that it can actually provide a service. By which I mean a service that doesn’t make its customers want to paper-cut their wrists open.

As readers who are good at picking up on innuendo have already deduced, it wasn’t always this way. When I first moved to Paris in the 1980s, the post office was on the very short list, along with the tax rates, the pop music and my downstairs neighbor’s criminally insane dog, of things that I really didn’t like about France.

Going to the PO back then was like getting a root canal: something to be put off as long as possible, and then endured with dread, resignation and, whenever possible, the help of substance abuse.