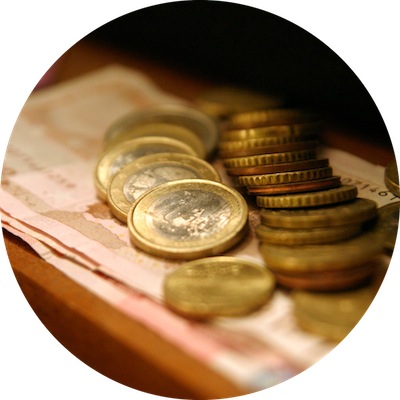 For the benefit of readers who have never worked in France, here’s a quick explanation of how this bureaucratic black hole sucks in all the cash that strays near its orbit…

People who have salaried jobs in France have their social charges automatically Roomba-ed out of their paycheck every month. Some are deducted from their gross salary and some are paid directly by the employer, making a total that nearly equals the net salary.

We freelancers, a term that in France is commonly understood to mean “free to lance your wrist veins”, pay all of those same social charges ourselves, which means that about 40% of our receipts spend less time in our bank accounts than we spend on the average trip to the bathroom. And the ultimate repository in both cases is, metaphorically, pretty much the same.

If you look closely at the currency here, you’ll notice that most euro notes have lipstick marks. This is from women freelancers kissing them goodbye.

Not only are France’s social charges onerous, there are also a stupefying variety of them. A pay slip can include up to 30 separate ‘contributions’, including for health, retirement, unemployment and disability insurance, a ‘general social contribution’, a ‘contribution for reducing the national debt’, a ‘national salary guarantee fund’ (I’m not making any of these up), a ‘national housing aid fund’, a ‘national Chardonnay relief fund’ (okay, I made that one up) and, the biggest charge of them all, allocations familiales.

Besides down the drain, where does it all go?

‘Family allocations’ (a.k.a. child benefits) is a concept that most Europeans are familiar with, but that strikes Americans, even pinko hemophilic-heart liberals like myself, as creeping confiscatory communism. Get this, Tea Party poopers: the government here actually hands out cash money every month to every family in the country that has two or more children, regardless of their income level.

The system was introduced in the mid-20th century to encourage French people to have more kids. This may seem incongruous in a Catholic country whose national motto might as well be ‘Liberté, Egalité, Infidelité’, but with its male population decimated, infrastructure devastated and accordion market depressed by one world war after another, France was in great need of a bébé boum to get the economy rolling again.

“If you look closely at the currency here, you’ll notice that most euro notes have lipstick marks. This is from women freelancers kissing them goodbye.”

Today, now that the economy is rolling (towards a cliff, dice, dans la merde, etc.) again, the allocations familiales also keep rolling along, and the payouts, which figure in the hundreds of euros per qualified family per month, cost the government a merdeload of money.

So yeah, I make payments for social charges in France. Big, whacking, painful payments to three different organizations: a retirement fund, a health insurance fund and a fund for all the other funds called URSSAF.

And no, I don’t know why it’s not ‘URCSSAF’. Presumably they do a better job compiling social charges than they do compiling acronyms.

Although maybe not, considering what happened this year… Read on…