A visit to the Hôtel de Ville: learning French and much more

If the Hôtel de Ville is symbolic of the city itself, Paris is certainly an ever-changing one, the building in question having functioned as everything from an execution central to a tourist attraction.

Thankfully, on the day I visited with the students from the Alliance Française Paris Île-de-France, its purpose fell into the latter category.

The students and I were given an informative guided tour of the magnificently beautiful (and, thankfully, refreshingly cool, given the overheated streets of Paris waiting for us outside) interior. Chatting with the students, I was determined to understand why they had chosen to passer l’été a Paris, and to partake in the many cultural activities in the Alliance Française calendar. And, I wanted to hear more than “mais c’est Paris! C’est incroyable!”. Why had they come to France, apart from the obvious draw of learning French?

What, for these students, makes it so very magnifique? 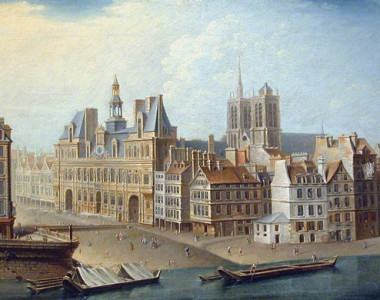 Our appointed tour guide shared multiple interesting titbits, one of which was that the square in front of the Hôtel de Ville was previously known as the place de grève. Workers who could only find irregular work (such as stone masons) would stand there in the mornings, searching for employment.

Enrico, an Italian student, has rather higher ambitions than the workers who frequented the place de grève. He’s one of those impressive reflections of the E.U: has a deft command of Italian (obviously), German, English and, as he went on to demonstrate in our conversation, now French. With the aim of working for the European parliament, he wanted to add something else to his résumé to up his advantages: learning French.

Designed by Edouard Deperthes and Theodore Ballu, and bearing a resemblance to Versailles, the Hôtel de Ville’s interior is (as you would expect) elaborate, breathtaking and intricate.

It sums up one of the principal reasons Juan, a 25-year-old Costa Rican, loves Paris: for the architecture. He caught my attention because unlike the others, he was utterly absorbed in capturing everything he saw on camera: the paintings, details and how the light fell in the rooms. Having previously studied architecture, he found himself falling under the charm of the Parisian Haussmannian buildings.

Juan described some of the many differences he found between the Parisian buildings and the ones in his hometown in Costa Rica. He perfectly summarised my own feelings about the streets of Paris when he said that, “N’importe où, même dans les petites rues, pas spéciales, il y a une histoire. Il y a de la beauté.” 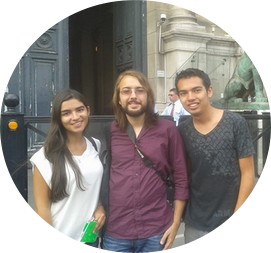 A tour of such an emblematic French building would not be complete without a mention of ‘liberté, égalité, fraternité’ – no explanation should be needed here!

The last person I spoke with was Maria from Colombia, who at 17 was the youngest of our group. She told me how she had spent some time in Laurent before coming to the capital, and had lived with une famille d’accueil. On arriving in France, she could speak only one phrase: “Je m’appelle Maria.” Which, really, only gets you so far in life.

When I asked her how it had been au début, she replied “Horrible. Carrément. Je n’ai que pu parler avec mes mains.” But the silver lining on this cloud – for it had been a turbulent time – was that she had been given the chance to grow up.

Learning about more than just the French language

Organised visits such as the one I attended at the Hotel de Ville pushed me to reflect upon what exactly the students (and myself) can hope to gain from time spent immersing ourselves within a culture. Really experiencing what’s on offer – and that’s more than the chicest restaurants, and hippest new bars – can be so enriching.

For these students, a reflection on the history and heritage of Paris nudged them into considering their own personal experiences: what they had learned about themselves, and whether this time abroad had changed them.

Had it changed Maria? She certainly thought so. And for myself? Perhaps… Un tout petit peu!

Have you spent time in France? Did it change you? Share your comments with us below!