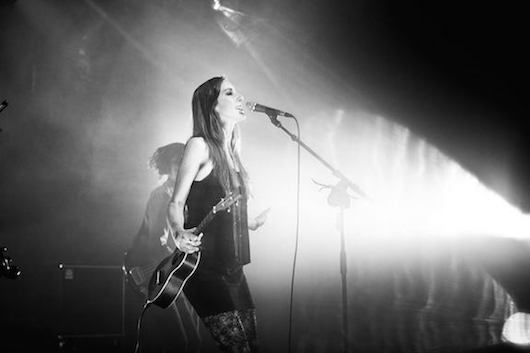 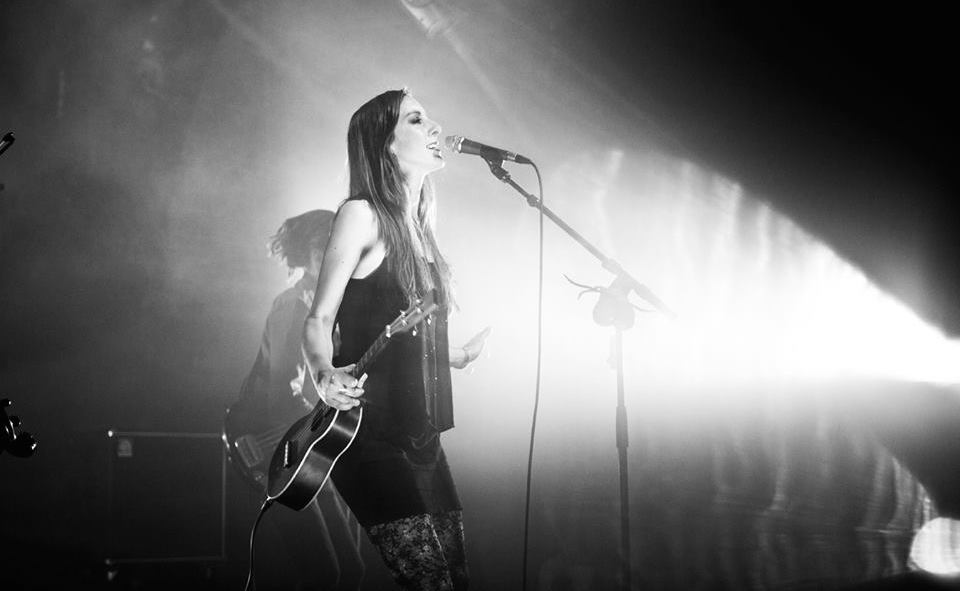 Seated at Le Café d’Arbalete in a flowing tank top, black pants, and soft felt hat, Sarah Jeanne Ziegler is just as effortlessly glamorous as one might imagine an emerging French folk artist to be.

Born and raised in Paris, she seems utterly in her element on this small, sunny terrace in the fifth arrondissement, tucked away next to the bustling rue Mouffetard. Her obvious ease and style could be intimidating – and it is, at first – but Ziegler dispels any of that with a big smile and a quick bise.

After a few minutes of conversation, it becomes clear that in addition to possessing an open, sweet demeanor, Ziegler is of the rare variety of artists who can talk about their work honestly without seeming pretentious. And that honesty, that kind of natural engagement with music, carries over into her subtly striking performances.

Ziegler has a voice that can bend and howl like Alanis Morisette’s or Fiona Apple’s, and an assured, almost hypnotic stage presence. With the October release of her EP approaching – her first studio recording, titled ‘L’Echappée’ – it’s evident that Ziegler is nothing but passionate about her projects and happily dedicated to her craft. 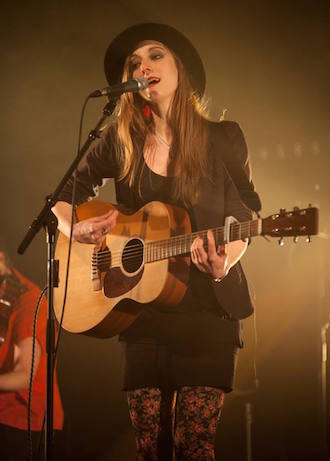 A mélange of French folk and chanson française

Ziegler’s genre of music is a self-described mix of French folk (which is different from American folk, although she cites artists like Bob Dylan and Leonard Cohen as influences) and traditional chansons françaises.

“In French actually, we don’t really say folk music,” she said. “We don’t use this term. We use chansons françaises, and it’s mostly based on the text and the writing. For me, in North American music, there is more emphasis on the music and form. And sometimes in classic chansons françaises, the text is here, and it’s beautiful—but sometimes the music is a bit simple. So American music was richer for me first, but then I also discovered the richness of French songwriters, and it was a whole new thing.”

Ziegler learned to play the piano as a child and the guitar as a teenager, taught by her musician father. “And as soon as I started the guitar, I started singing too,” she said, “and I never stopped.”

However, she didn’t begin pursuing music seriously until she moved to Montreal for a year, studying abroad as a student from Sciences Po. It was in Canada that she bought her first guitar, a Martin. “I don’t know if it’s the reason why, but I started to write my own material after that,” she said. “I also started performing for a lot of people.”

And sometimes in classic chansons françaises, the text is here, and it’s beautiful—but sometimes the music is a bit simple.

After returning to Paris and completing her masters in cinema, she decided to change paths for good. “I was already in a more artistic field, I was playing more and more and had started to perform,” she said. “I had really good feedback from people and I was encouraged. So after one year or something working in [cinema production] I had to make a choice … and it wasn’t really a hard choice because it was like, I have to do it now, you know? I’m not going to give this up, so if I want to do it, let’s try it now.”

Open mic nights were the easiest way to gain valuable performing experience, and Ziegler gradually became a regular at pubs like the Highlander (hidden in a small alley near the Institut des Beaux Arts), the Tennessee Jazz Club, and the Pop In. “Now that I do gigs and real concerts, I realize that [open mics are] hard, because it’s just a few songs,” she said. “It’s people that you don’t know at all, who don’t know you. And you have to make an impression.” She stops for a moment and laughs, “and they’re also drinking beers!”

Open mics nights are also what helped Ziegler find her first band mate. Nelson Hamilcaro happened to be having a drink at L’Entrepot, a restaurant and cinema, where Ziegler was playing. Hamilcaro was a bassist, and for almost two years they worked as a duo, composing and releasing an auto-produced EP. Eventually, they met a drummer and violinist who comprise the rest of the current band. “We met the other musicians and a producer who really accompanied us in working more on the direction artistique, the artistic identity,” said Ziegler. “So now we have a second EP, produced by this guy, and now it’s bilingual, there are more musicians. For me, the project is more accomplished.”

Ziegler describes the second EP as a more professional and time-consuming endeavor than the first. “The first one we did basically in an apartment, Nelson and me, and we didn’t have drums, so we did stuff with the computers too,” she said. “But for this one, it was a longer process, because we really worked on the tracks a lot in the studio.”

A lot of the songs talk a little bit about how I live here but I spend a lot of time elsewhere … and I’m always a bit like, in between these two. But it’s never going to be resolved, so I might as well sing about it.

Two singles from the EP have already been released on Ziegler’s Soundcloud and Bandcamp pages: the title track ‘L’Echappée’, and ‘Ma Ville’, an ode to Paris. ‘L’Echappée’ is a bold, bilingual, reggae-influenced track with spare, haunting instrumentation, including Ziegler on ukulele and a stellar violin accompaniment. On the other hand, ‘Ma Ville’ is a soft, acoustic tribute to the town where Ziegler was raised. Accompanied by a dreamy mix of guitar and violin, her voice is quiet, assured and brimming with emotion, with a lilt reminiscent of famous chanteuses like Françoise Hardy.

“A lot of the songs talk a little bit about how I live here but I spend a lot of time elsewhere, in Canada and the United States, and I’m always a bit like, in between these two,” she said. “But it’s never going to be resolved, so I might as well sing about it.”

Challenges in the Parisian music scene

Though she is happy to be located in her hometown, being an up-and-coming musician in a major city poses certain challenges. On the one hand, it’s advantageous as the opportunities in Paris are seemingly endless: hundreds of venues and millions of potential spectators. But the audience’s ability to choose doesn’t always work out in favor of emerging artists.

If you conquer Paris, it’s great, because you have it all, but it’s so hard to. 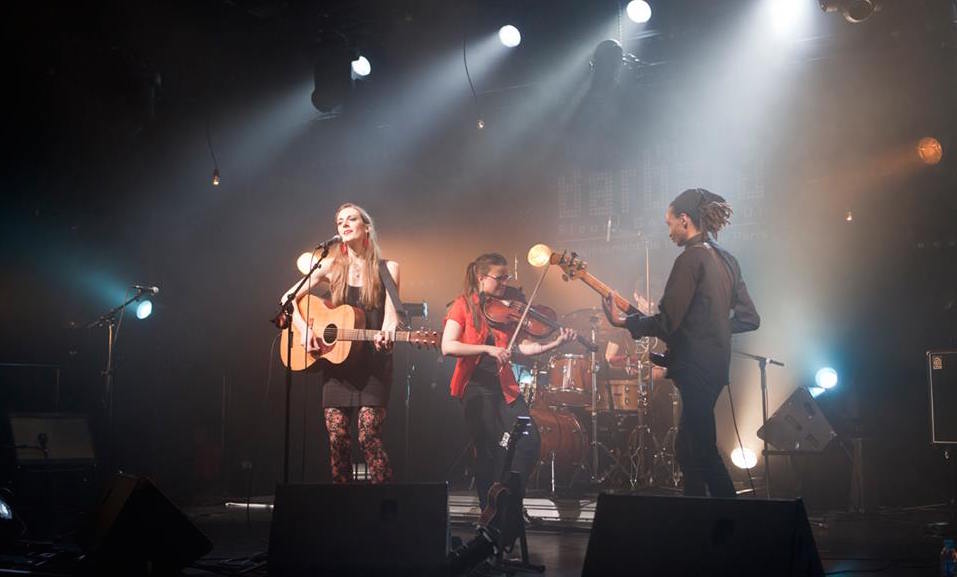 “If you conquer Paris, it’s great, because you have it all, but it’s so hard to,” explained Ziegler. “[The audience has] so many options for music that they don’t really discover bands. They go and see the bands that they know, so as an emerging band, it really takes time to gather a bigger audience. Like when we go and play in other towns, people see it in the newspaper and they come just to see what’s there and they are really interested in discovering bands and that’s very pleasant, because in Paris, it’s hard.”­­­ Considering the strength and easy beauty of the upcoming EP, it doesn’t seem unlikely that Ziegler can, and will, conquer.

Ziegler’s Paris isn’t restricted to a single neighborhood or arrondissement: she was born in the 15th and raised in the 13th near Chinatown, living for a while near Les Halles before ending up near the Panthéon and the Jardin du Luxembourg.

The fifth and sixth arrondissements, near the Panthéon and the Jardin du Luxembourg. 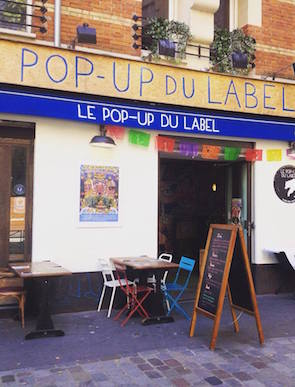 “I love it [here] because it’s so quiet,” she said. “I think I like it because I do so many things now, and I like to go back home and be a bit calm. And it’s also a neighborhood I used to go to a lot when I was a kid, so that’s nice.”

Ziegler named La Cordonnerie on rue Saint-Denis as “very laid back and cheap”. She also likes to grab drinks from Le Pop Up du Label and Bar Dix.

Will you be seeing Sarah and her band live in the Parisian music scene? Let us know in the comments below!

‘L’Echappée’ will be released on 23rd October at Le Divan du Monde (75 rue des Martyrs). You can listen to ‘L’Echappée’ and ‘Ma Ville’ on Bandcamp and Soundcloud, and follow Sarah on Facebook.