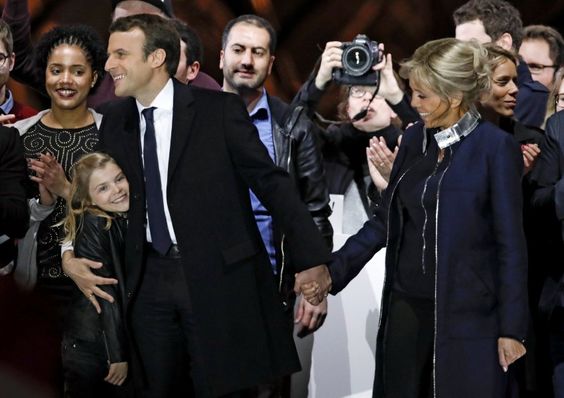 As a French woman interested in the politics of my country, I first heard about Emmanuel Macron when he was appointed as special deputy adviser to former President Hollande.

In 2012, he resigned from a highly paid and desired position at Bank Rothschild to serve his country.

Macron was praised as an exceptionally young and brilliant man who had been noticed, recommended and introduced by famous figures of the political and intellectual French scene such as Jacques Attali and Michel Rocard.

Two years later, after a cabinet shuffle, he became known to the public when he was called to replace Minister of Finance Arnaud Montebourg.

Macron: A man and his wife, the age gap

Because of his raised profile, Macron’s wife, Brigitte, started to be in the limelight as photos of the couple attending state dinners popped up in the tabloids.

That’s also when I became intrigued and gradually impressed by this man who obviously stood out of the crowd of ‘professional’ politicians, both men and women, whom we had had to put up with for decades, from all parties.

Over the months, as I showed more and perhaps naïve enthusiasm whenever the young Finance Minister was the subject of a discussion, I used to try to cover-up this sudden infatuation by saying that I felt aligned because, like his wife, I was an ex-teacher in my 60’s. This made others laugh and I got away with it.

That’s all I had ever said or allowed myself to hint at concerning Emmanuel Macron’s personal life and had tacitly promised myself that that was neither the point nor my business (or anyone’s).

However, today, I am breaking this vow of silence.

A woman in her sixties: the First Lady

I have read too many articles, heard too many commentaries, of all kinds.

Whether these are demonstrating outrage at sexist discrimination plainly reducing the First Lady to a 24-year-older-than-her-husband monster woman, I find solace in none. Not that I want to discuss again and again all that has already been dissected in the press, on radio and television, and grotesquely exhibited in cartoons!

Indeed, all the sound and fury around the woman has not left me indifferent. It has had a troubling echo in me, the obvious reason being that, like Brigitte Macron, I too am a woman in her 60’s.

As such, I also come across all forms of discrimination towards older women and one of the most humiliating, is the would-be-kind, remark ‘you look good for your age’.

This discrimination is so deeply rooted in our Western culture that, ironically, I am applying it to myself too. For instance, I don’t work out to keep fit but because I simply enjoy it. However, when I am at the gym, I explain to my younger companions that it is good for the bones of a menopausal woman.

Frankly, it’s the least of my concerns. Why do I do that? Is it just because I am trying so hard to fit in the image our modern society wants us to inhabit?

For the last few weeks, Emmanuel Macron’s more and more probable election came hand in hand with more stories about his marriage: so much so that it became intoxicating. He even had to cut short a rumor of supposed homosexuality!

The rumor proffered that as the couple, the now President formed with Brigitte Macron could only be a façade; another time, he had to explain why, in a poignant statement, he would not be a father.

Macron has proved to all of us if it still needed to be proven, that love has no boundaries and conquers all kinds of prejudices.

Good for us, women of all ages, as, in the end, what we need to remind ourselves is that ‘We are all Brigitte Macron’.

On 8 March, on Women’s Day, I attended the rally organized by ‘Les Femmes En Marche’ at Théâtre Antoine in Paris where Emmanuel Macron intervened and insisted on his being a true feminist. He had his wife join him on stage for this special occasion.

The now First Lady delivered a very humble and intelligent message to the audience, insisting on how much she felt energized and supported by other women.

I could say the same to her!

The First Lady role has a non-official status in France which should, undoubtedly, achieve a higher profile under Emmanuel Macron’s new Presidency.

And because Brigitte Macron, as the new First Lady of France, has had to overcome so many obstacles, I feel that she shows us the way to find our own true worth, at any stage of life.

What if, in fact, it was Brigitte Macron’s: ‘The future of man is woman’ as appropriately asserted by poet Louis Aragon in ‘Les Fous d’Elsa’?

What do you think of the new First Lady of France? What are your thoughts on the comments made about Brigitte Macron and the age gap? Share your comments and experiences in the comments below.