In a newspaper comic strip, a giant meteor is about to obliterate planet earth. Two shopkeepers are obviously delighted. They won’t have to pay their liabilities when all their debtors are wiped out in the coming cataclysm.

The merchants are Jews and they bear a remarkable likeness to certain caricatures in 1930s Nazi propaganda. The narrative also includes hook-nosed, cigar-chewing banker named, Blumenstein. But, the actual hero of the story is the hugely popular cartoon character, Tintin, created by Belgian writer, George Remi, alias Hergé.

When the German blitzkrieg smashed into Belgium, Hergé and his wife joined tens of thousands of terrified refugees fleeing south into France. But after King Leopold surrendered, they followed the monarch’s request and returned home. 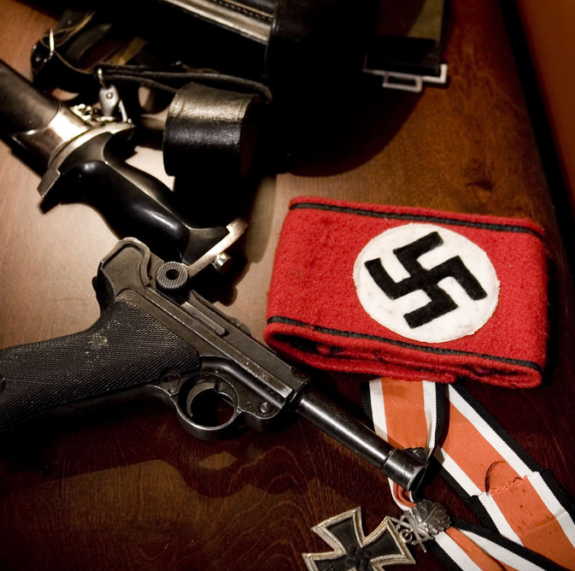 During the occupation, Hergé worked for Le Soir, a pro-Nazi newspaper. His comic strip version of L’Étoile mystérieuse ran alongside mountains of anti-Semitic propaganda. 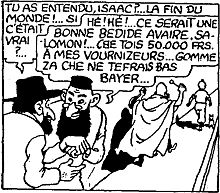 When Jews were being ordered to remove their children from schools, banned from owning radios, and under a special curfew, Le Soir, described these measures as an indispensable preparation for the orderly ’emigration’ of Jews.

When Belgium was liberated in 1944, Le Soir was shut down and Hergé arrested.

He was listed as a collaborator in a Resistance document known as the ‘Gallery of Traitors’. He and other journalists faced lengthy investigations into their wartime allegiances.

Tintin was not, however, one to buckle under in a dispute between collaboration versus resistance. He was an established and popular character. His adventures went from strength to strength after the war. 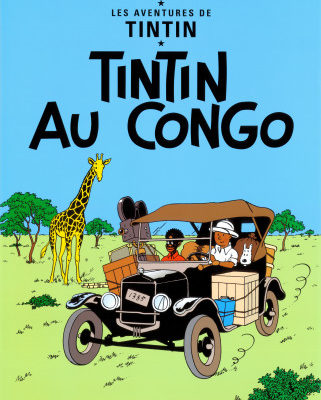 But political incorrectness was never far from the surface.

Tintin In the Congo, portrayed the Congolese as being infantile and stupid, and a black woman bows to Tintin saying:

White man very great… White mister is big juju man.” Despite this, and rather bizarrely, it remains the most popular Tintin book in L’Afrique francophone.”

The animal rights lobby was also upset when Tintin shot several antelopes, injured an elephant, blew up a rhinoceros with dynamite, and killed an ape to wear its skin.

But despite this post-war renaissance with regular titles and huge worldwide sales, Hergé’s war record clung to him forever despite several attempts to apologise.

I myself believed that the future of the West could depend on the New Order. For many, democracy had proved a disappointment… In light of everything which has happened, it is of course a huge error to have believed for an instant in the New Order.

Surprisingly, then, although some Belgians never forgave him, he was eventually made a ‘Belgium Officer of the Order of the Crown’ in 1978.

As mentioned, when Belgium was liberated in 1944, Le Soir was shut down and Hergé arrested. 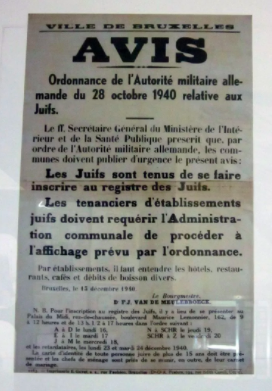 He was listed as a collaborator in a Resistance document known as the ‘Gallery of Traitors’. He and other journalists faced lengthy investigations into their wartime allegiances.

But before we get sanctimonious about Hergé’s obvious and deplorable antisemitism, we should remember that anti-Jewish feelings were well-established in many western countries long before the Second World War:

No one should forget that when L’Étoile mystérieuse was transformed into a book, and Hergé was erasing his anti-Semitic comic strip themes – Jews were being lined up in front of gas ovens.

Not many months later, six million Jews would be erased from the face of the planet.

Do you find Tintin too controversial? Or is he a cartoon hero? We would love to hear your views. Please leave your thoughts in the comments box below.