La Parisienne parfaite: who is she – really? 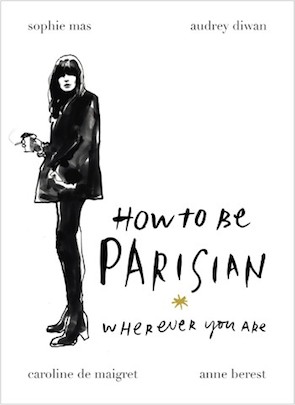 In one hand a cigarette flings left and right pointing at a thing or five, in the other a phone flashes with five missed calls from Louis, Jean, Alexandre, Paul and perhaps another Jean. Reppettos are at her feet and tight dark jeans hug her incredibly slender legs (for someone who ingests at least a croissant or three every morning and/or afternoon).

Although this may be the exact visual portrayal of just about any young girl you spot on the streets of central Paris, there is much more to this notorious attitude considered by many to be ‘flawless’ – although personally I could easily pick out a flaw or several.

It’s an attitude that has become the topic of countless movies, songs, books and articles. Most of these cultural satires are made up of a mix of crowd-pleasing adjectives such as ‘snooty’, ‘moody’, ‘stylish’ and ‘cultured’ – as if these incredibly vague terms would suffice to paint an accurate portrait of the extraordinarily complex caractère of the Parisian girl.

The ifs, the buts, and the whys of her way of life are the elements that truly seem interesting to investigate.

‘How to Be Parisian Wherever You Are: Love, Style and Bad Habits’ by Anne Berest, Audrey Diwan, Caroline de Maigret and Sophie Mas has a wonderfully fresh take on the subject.

It provides the reader with an understanding of the Parisienne’s mysterious thought process through a step-by-step introduction to her reasoning methods for just about anything in life, from parenting to choosing what to eat when on a first date. Amusing illustrations, short narrative passages, candid photographs, bulletpoint lists; the formats vary from page to page but all work together harmoniously in conveying the idea of la Parisienne parfaite avec toutes ses qualités et ses défauts.

Although brought up in Paris, I may not be able to personally identify with all the points made by Anne, Audrey, Caroline and Sophie since I was brought up by non-Parisian parents. However, I can most certainly pinpoint at least one girl I’ve known to embody each one of the 254 pages.

She cares but not too much. She tries but not too hard. She loves and hates with equal amounts of passion. She is a contradiction to herself; something I noticed and adapted to, to some extent, yet never fully understood or questioned until I moved to the United States. There, I was asked for the first time why I did certain things a certain way instead of opting for more logical alternatives. 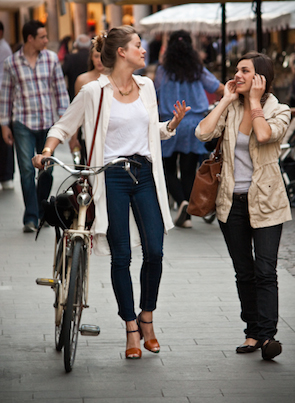 To give you a rough idea of just how much I can identify with this excerpt, I own about five long black coats.

I must admit that the idea of it being a lazy slimming alternative did definitely cross my mind while purchasing it, if not made it the deciding factor for me and my wallet. I mean, it does hide the entire back of your body, so what’s not to love? I could go to the gym, but I don’t – I have a membership and it is far too cheap to make me feel guilty for not going.

Therein lies the essence of the problem – or at least so I tell myself, when in fact it is simply due to a strong lack of motivation and willpower.

We want to be treated like princesses but hate girls who are too girly and men who behave like puppies. The Parisienne likes men that are gallant and pamper her but cannot stand men that blindly follow her lead. She wants a partner who challenges her views of the world without altering them, who disagrees with her but only on certain topics.

The waiter then turns to the man.

“I’ll have the same please,” he says.

And in a flash, the whole scene crumbles. Oh no, a sheep, a follower, what a bore. Suddenly her eyes are opened, and she realizes that his conversation has been peppered with banalities for the past half an hour. She knows she’ll eat two bites, then find a reason to leave before the hour is up. And she will never see him again.

I personally find this very true in that we are taught to surround ourselves with bold people and steer clear of weak personalities. They “ne font pas bonne compagnie,” and do not contribute to sharpen the mind and develop one’s personal intellect – any French man or woman’s most valued social tool. Ultimately, we feel the need to socialize with individuals who agree with us but have the strength to disagree with us if they were to feel like doing so.

There is definitely some sense in this theory. It simply relates to the idea that we connect with people who share basic values with us, but we do not wish to engage in conversation with those identical to ourselves. Someone who leaves no place for debate cannot teach us anything new – which, by the way, constitutes a crucial element of all French dinner parties. What’s exciting about that?

One might ask oneself if this art of being a well-composed contradiction has anything to do with French culture, history, food, art, and music. What drives the Parisienne to be so, well, uniquely parisienne? 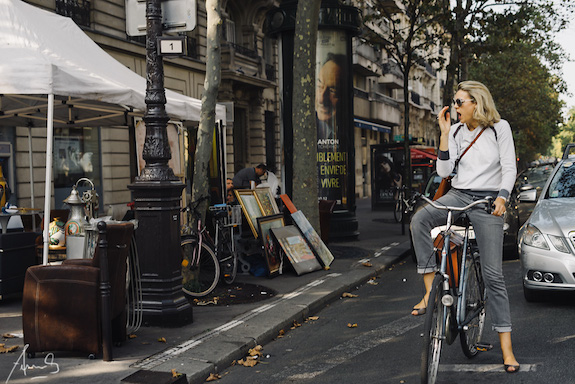 Why don’t we have such a strong image of what the Londoner is, or the New Yorker?

All three cities allow girls to behave as they please yet the Parisienne chooses not to as she is far too pleased with the mould she has been born into, and sees nothing wrong with blending into her surroundings as best she can. And I mean to use the word ‘blend’ because, although I may be criticized by my fellow Frenchies for doing so, the Parisienne consistently claims to be unaffected by the things people say and pretends like she embodies the very essence of carefreeness. But I find this to be highly untrue.

In my opinion, we worry about what people think far too much. The Parisienne traditionally makes others believe that all she does, she does for herself, without ever thinking of what anyone else may have to say about it. Our personal Parisian flair is all we need to get us through the day.

The Parisienne complains whenever she can, and accompanies the verbal aspect of it with a variety of huffs and puffs and an assortment of lively grimaces. She is never satisfied but, even if she is, she will try to find something or the other that is worth cribbing about. ‘Tis making good conversation, ‘tis all.

“C’est pas mal” or more commonly just “pas mal”, is used when describing something one likes and truly appreciates; of course the facial expression and tonality of the voice help to make the expression more convincing. However, this simple use of French language is a direct translation of the French mentality. “Pas mal“ means “not bad”, however, here it actually means “very good”, perhaps “great” even: “c’est pas mal du tout”, for example. 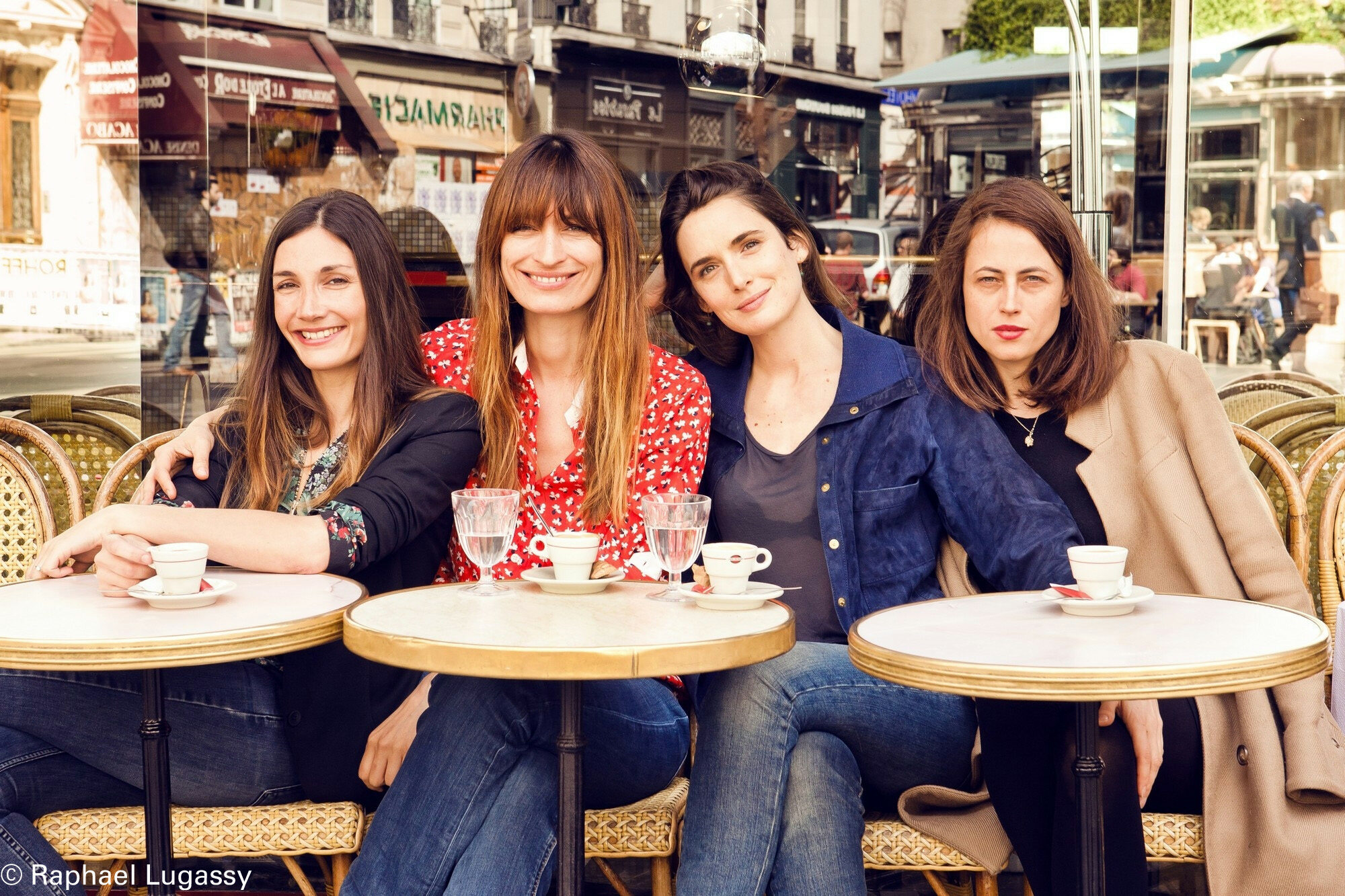 Handing out compliments easily, praising a large amount of things or being too giddy are all synonymous with a lack of depth and the inability to critically analyze one’s surroundings. The French think this is the one and only true explanation for American optimism. I frankly think they could learn a thing or two from Americans when it comes to this particular topic.

The Parisienne might also have mastered the art of being a graceful, well-read, stylish and truly elegant feminine feminist; and her undying allure continues to mesmerize the world, but has the Parisienne successfully approached the ideas of individuality and originality? Can one be unique if one is so accepting of the clichés that others box us into?

Do you agree with Helena’s opinions on la Parisienne parfaite? Have you read ‘How to Be Parisian Wherever You Are’? Share your thoughts with us below!

Image credits:
1. ‘How to be Parisian: Wherever You Are‘, by Ebury Publishing.
2. Italian cycle chic, by Luca Violetta via Flickr.
3. Parisian #1 – Paris, by Sacha Fernandez via Flickr.
4. Anne Berest, Audrey Diwan, Caroline de Maigret and Sophie Mas, via Random House.

This popular article has been refreshed and republished in 2021.