Video: James Henry of Bones – what’s new on the food scene in Paris? 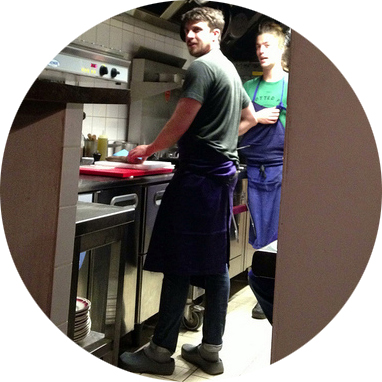 “God I wouldn’t even want to!” says James Henry when we ask him to describe himself in three words.

Others have no trouble pinning qualities on the Australian-born owner and head chef at Bones restaurant. According to Alexander Lobrano, Henry is “warm, direct and completely unpretentious”.

“I guess I would have to say moody, demanding and curious!” Henry eventually concedes to us.

When we dined at Henry’s restaurant, Bones, for our May Intimate Gatherings and Indulgences, we were taken aback by how much of the chef’s personality has spilled over into his work, and cuisine. “My food is simple, direct and clean – I guess I am kind of the same,” he told My French Life™ in a recent interview. “Your mood has a huge impact on how you cook!”

As Lindsey Tramuta of Lost in Cheeseland explains, “Henry accepts that not everything he prepares (offal, for one) will appeal to all diners but if it doesn’t, the house-made bread, butter and charcuterie certainly will.”

Lindsey shares a delightful video produced by Bones, in which Henry takes us behind the scenes of both his restaurant, and the wider Parisian dining scene.

“It’s a beautiful reflection of everything that’s exciting and fresh about the state of Paris dining today,” she explains of the video. “No need for moderation, watch guiltlessly.”

See for yourself here:

What excites the most about French dining and cuisine? Share your thoughts in the comments box below.