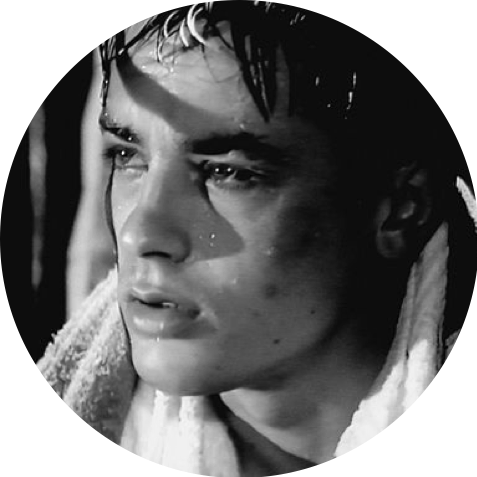 If beauty is in the eye of the beholder, ugliness must be too.

A glance at a list of twentieth century movies, especially the early ones, makes it hard to describe the period as anything but the age of the ugly man.

Naturally there are numerous notable exceptions and very handsome stars were made famous by studios on both sides of the pond.

But these days, even the most popular early heart-throbs, including Bogart, Niven, Gabin, Lorre, Chaplin, Montand, Belmondo, and many, many more, can hardly be described as anything but ugly.

Enter Alain Delon. He appeared suddenly in the sixties and was soon the most recognisable Frenchman in the world – a position he shared with Charles de Gaulle, who, it must be said, he somewhat overshadowed in the glamour stakes.

Delon was born in Paris in 1935. His parents separated when he was very young and he had a troubled early life. Expelled from several schools due to his ‘difficult character’, at seventeen he enlisted in the French Navy 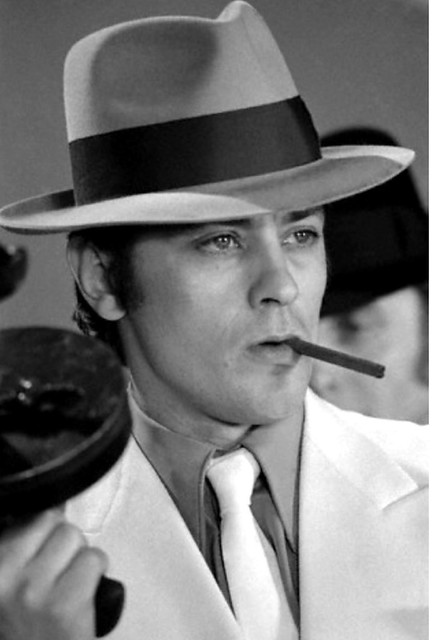 He served as a Fusilier Marin in the war in Indochina, but he spent eleven months out of his four years of service in a military jail for being ‘undisciplined’.

Following a dishonourable discharge, he spent time working as, among other positions, a waiter, a butcher, a porter, a secretary and a sales assistant.

Delon’s movie career was kicked off by coincidence. He joined an actress friend on a trip to the Cannes Film Festival where he was spotted by a Hollywood talent scout.

He never looked back and went on to make his fortune playing hardboiled hoods and criminals in dozens of detective potboilers.

Delon was blunt about his own acting:

All my life, I’ve played at being Alain Delon. For the rest, I couldn’t give a damn.

Playing himself certainly provided ample material. There were affairs with a throng of beautiful women. Gangsters, crooks, racketeers, petty criminals and other shady characters were always part of his private life.

Delon’s ambiguous answer to a question about his sexual predilections fed rumours of gay relationships.

In 1968, Delon found himself involved in a murder, drug, pornography and sex scandal.

Whether this episode reflects life imitating art or art imitating life is a moot point. His bodyguard was beaten, shot, wrapped in a sack and dumped on a rubbish tip on the outskirts of Paris.

Delon was questioned by the police immediately after the murder. It was alleged that he’d had several meetings with French gangsters, several of whom died violently soon after they’d met.

The investigation that followed revealed a tangled web of serious crime with a cast that included celebrities, politicians, wealthy businessmen and society heavyweights.

Compromising nude photos, some of which included the wife of future President Pompidou, were circulating among the rich and famous.

But, after several months of media hysteria, Delon was cleared of all charges.

Alain Delon branded underpants, fragrances, and other advertising deals ranging from sunglasses to helicopters, made him immensely wealthy. 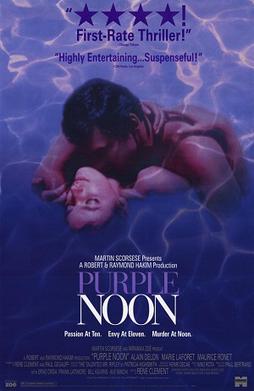 In addition to the huge popular acclaim he received for his early gangster and crime movies, several of Delon’s films were also very positively received by the critics.

In 1970 Delon made the Le Cercle Rouge, directed by Jean-Pierre Melville, and remembered for its climactic heist sequence which lasts for half an hour without any dialogue.

In 1976, working with Joseph Losey, Delon was the titular character in Monsieur Klein, a film exploring life in Paris under the Nazi Occupation.

Apart from these high points, some critics claim that good movies starring Delon are quite hard to find. But when he retired from movie making, he had appeared in over 100 successful and invariably lucrative productions.

Often dubbed the male Brigitte Bardot, some critics have pointed out that Delon’s early films dwell unselfconsciously on the physical attraction of his body and face.

So, was his somewhat androgynous sexuality one of the ingredients for his amazing acting successes? Well, perhaps yes, because, on screen, Alain Delon is just plain bloody mesmerisingly beautiful.

Have a look for yourself.

Are you an Alain Delon fan? Which of his films did you enjoy the most? Join the conversation in the comments section below.